5 Controversial Fashion Lawsuits That Caused A Stir In The Industry

Last week, Adidas took Thom Browne to court claiming the house’s use of parallel bars on its apparel imitates Adidas’ three-stripe branding which is “likely to cause consumer confusion and deceive the public.” This isn’t the first time that the sportswear brand has waged a war over stripes— from Forever 21, Sketchers and Marc Jacobs to Puma, J Crew and even Tesla— Adidas has had legal battles against all and more to protect its signature visual language. Can one brand really have complete monopoly over something as ubiquitous as stripes? While we let the court’s verdict give us an answer to that, here’s looking at 5 other instances of ‘battle of the brands’ that caused a stir in the fashion industry: 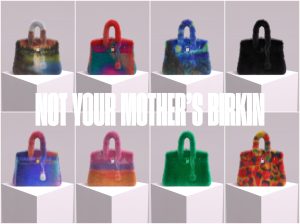 Flattery or theft? Last year, Hermès sued NFT creator Mason Rothschild for the creation and sale of one hundred Birkin-inspired NFTs covered in faux fur and an array of patterns and artworks. According to the French luxury house, these ‘MetaBirkins‘ were evidence of trademark infringement and dilution, misappropriation of its BIRKIN trademark and cybersquatting. In response to the accusations, Rothschild pointed out that the First Amendment of the US Constitution gives him the right to create art based on his interpretations of the world around him, much like it gave Andy Warhol the right to make and sell his ‘Campbell’s Soup Cans’. 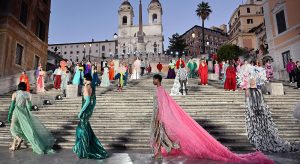 Taking over Rome’s Spanish Steps, Valentino showcased its dreamy Fall/Winter 2022 collection last year in July. The show drew a crowd of Hollywood stars and important fashion figures causing street closures and traffic disruptions which affected businesses in the area, including Dior’s boutique. Dior stated that customers were “refused access and blocked at the barriers,” and that its store “remained empty and could not operate from the early hours of the afternoon.” In a letter directed towards Valentino, Dior demanded compensation of €100,000 within 15 days from the brand. 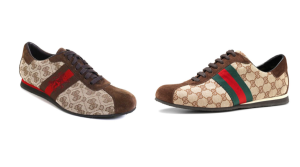 Gucci vs. Guess, one of the most notable cases in the history of trademarks lasted almost a decade. Gucci first took Guess to a New York federal court in 2009 for counterfeiting, unfair competition and trademark infringement when Guess came up with a shoe design similar to that of Gucci’s, especially the interlocking G logo. In 2012, the Italian luxury label was given $4.7 million in damages. However, the legal battle didn’t end there. In its international proceedings, while China and Australia sided with Gucci, Milan and Paris ruled in the favour of Guess. Eventually, in 2018, representatives of both companies came forward and confirmed that they both entered into an agreement, details of which were not disclosed. 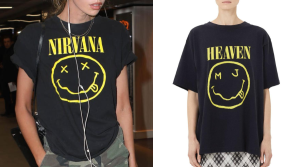 Back in 2018, Nirvana sued Marc Jacobs for using a variation of the band’s iconic X-eyed smiley face with a tongue sticking out in its ‘Bootleg Redux Grunge’ collection. In response to the allegations, Marc Jacobs filed a motion in 2020 requesting summary judgment dismissal claiming that the smiley was never properly registered by Nirvana and that the band may not have even had the right to register the work in the first place. The label also argued that the market is saturated with the smiley face symbol, and it cannot be attributed to one entity. As Marc Jacobs’ lawyers told a Californian federal court in 2020, “It’s ironic how much trouble a smile can cause.” 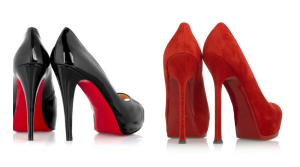 Three years after Louboutin was granted a trademark for its “lacquered red sole on footwear” by the U.S. Patent and Trademark Office, it came to their notice that competing French fashion house Yves Saint Laurent was selling a monochrome shoe featuring an all-red insole, heel, upper and outsole. In April 2011, Louboutin filed trademark infringement, dilution, and unfair competition claims against YSL. Following an 18-month-long legal battle, the court ruled that YSL may continue to sell shoes with a red sole, so long as the entire shoe is red while still granting Louboutin trademark protection over the red sole alone.