From essaying endearing characters in rom-coms, strong personalities in biopics to feisty villains in fantasy genres, Emma Stone amazes us with her range. Whether she’s the star of the show or the actress in support, the Oscar-winning celebrity leaves an impression every time we see her on screen. On her 33rd birthday today, we take a look at 5 films you must watch to appreciate her theatrical skills.

The film for which Emma received the Academy Award for Best Actress, La La Land tops our list. It’s a treat to watch her channel the Girl Next Door vibe to her wide-eyed and relatable character Mia. Whether it was tap-dancing with her on screen co-star Ryan Gosling in the Hollywood Hills or giving an emotional speech about how she’s not talented enough, the musical takes you through a gamut of emotions. And although the couple doesn’t end up together, you’re not disheartened as that’s the perfect realistic conclusion to the film–life isn’t always a fairytale and relationships are compromised when you chase your dreams. 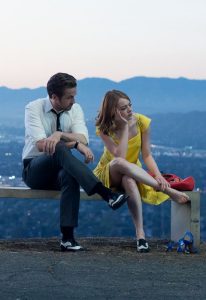 2. Battle Of The Sexes

This film is about the highly publicised, history-making 1973 tennis match between Billie Jean King (Emma Stone) and Bobby Riggs (Steve Carell). When Bobby claims he can beat any woman in a tennis match, King agrees to play him and ultimately beats him. Emma embodies the role of the sports player to the T and does full justice to her role. You see the rough and tough athletic side, and also  the emotional one, through Billie Jean’s same sex relationship with Marilyn Barnett. 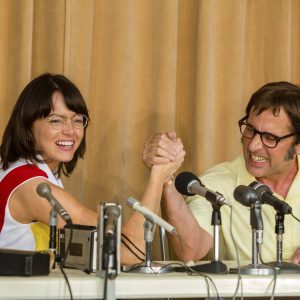 You’re mistaken if you think Emma Stone plays an antagonist in this film. This is in fact, the origin story for the character. We all know Cruella de Vil as the puppy-skinning villain from 101 Dalmatians but here, Estella (Emma) is the protagonist who’s on a mission to seek revenge from the Baroness (the wonderful Emma Thompson) responsible for the death of Cruella’s mother. She aspires to be a designer and works under the Baroness, but overthrows her in her own game to take the fashion world by storm. While the film didn’t receive critical acclaim, we certainly enjoyed Emma’s new avatar in high glam outfits and OTT make-up. 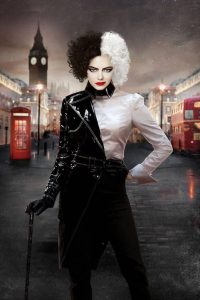 Yup, we know that Steve Carell and Ryan Gosling are the prime stars of the film but the common thread tying them both is Emma’s Hannah. We love her radiance and confidence, and of course, the ability to turn down the super hot Jacob (Ryan) the first time he tries picking her up. TBH, we wouldn’t be that strong. But then of course, they eventually fall in love and we love the way they recreate the whole Dirty Dancing scene. 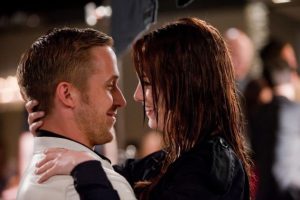 Emma carries this teen rom-com all by herself. She plays Olive Penderghast who lies about losing her virginity to protect a gay friend from being bullied. But when everyone in college believes it to be true, Olive goes from being a nobody to the popular gal on campus. Olive loves the attention and popularity, so she doesn’t reveal the truth. Instead, she embraces it and takes inspiration from the book The Scarlet Letter and its protagonist Hester Prynn by stitching a red A on her t-shirt. She does all this while romancing the college hottie (Penn Badgley) and facing the wrath of her nemesis (Amanda Bynes). 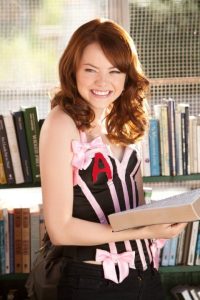