If you stack more fashion magazines on your bookish nook than those pretentious self-help books, you may have heard of the term ‘supermodel era.’ But what’s with the epochal connotation? It’s because today, we’re celeb worshippers. The craze for models has unfortunately taken a backseat. And thus, the eardrum-bursting claps are only reserved for the star-studded conclusion at the ramp. Ironic, isn’t it?

While this is certainly not a rant about celebs taking over other arenas despite the ample scope of work in their own, what we’re coming to, is a humble attempt at highlighting the days when models worked their way up the ladder, earned a name for themselves, & basked in the glory of their fame. 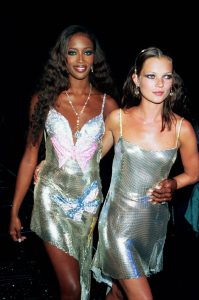 Moss was scouted at JFK Airport by Sarah Doukas of Storm Management whereas Campbell was scouted doing window shopping by Beth Boldt of the Synchro Model Agency. Talk about unusual beginnings. Having dipped their toes in the cutthroat industry at ages 14 & 16 respectively, the early start catapulted their success multifold, by virtue of their star quality, incessant networking & incomparable work ethic. 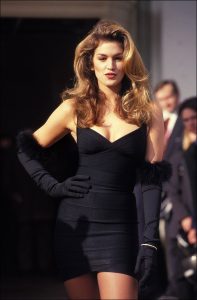 Dropping out in just a semester from her chemical engineering course at Northwestern University, Cindy pursued a full-time modelling career starting from the year 1985. Right off the bat, one would always associate Crawford with her Pepsi stint at the Super Bowl, but her real prowess lies in walking for design biggies namely Versace, Calvin Klein, Oscar De La Renta, Balmain, Valentino & the like. 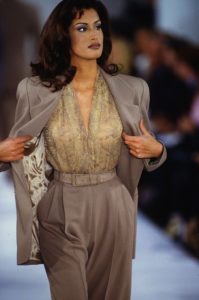 Termed the Canadian invasion in the modelling industry, the half-German half-Pakistani model was discovered at 17, while working at a McDonald’s. Having done her first major cover with ELLE Magazine, her imminent success was cemented by her appearance in an Elton John music video & landing the prestigious Victoria’s Secret contract.

Honestly speaking, not a single day goes by where I don’t regret letting go of the part-time gig at the pizza place post-high school. Who knows, would’ve signed with IMG today.

To honour the works of Gianni Versace, Versace’s SS18 collection not only paid homage to the late designer but also brought together the iconic 90s tribe, that constituted of Cindy Crawford, Naomi Campbell, Carla Bruni, Helena Christensen & Claudia Schiffer. Lensed in semi-sheer, champagne-coloured dresses, the collection evoked the allure of the 90s through its silhouette selection & bombshell trope reminiscing.

The Indian Supermodel Scene In The 90s Celebrated Indian supermodels Milind Soman and Madhu Sapre, who were also a couple in the 90s were embroiled in a controversy over posing nude in a Tuff shoe advertisement. Wrapped around with a python & nothing but the brand’s shoes, the audacious makings of the campaign did not sit well with plenty of folks. And yes, the police were involved. But now as we look back, this milestone set the tone for many creative revolutionaries to come.

Also Read: The Hottest Sheer Dresses On The Red Carpet That Had Us Collecting Our Jaws Off The Floor