On 17th June 2022, 80 women from across 25 countries added a new female chapter to the history of mountaineering as they created a world record for ‘The Longest Women’s Rope Team’ on the 4164 m high mountain Breithorn, in Switzerland. The lineup included 25-year-old Indian alpine skier Aanchal Thakur who is no stranger to making history. In 2018, she won the bronze medal in the Alpine Ejder 3200 Cup and became the first-ever Indian skier to win an international medal. Her winning streak didn’t stop there, Aanchal won her second medal in an international skiing event at the FIS Alpine Ski Competition and a bronze medal at the 2021 event held in Montenegro under the banner of the Jamaican national championships. She now has her eye on representing India at the 2026 Winter Olympics.

We sat down with Aanchal Thakur to find out more about her experience of climbing a 4000m peak with these other incredible women: 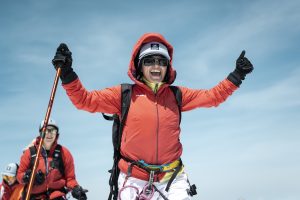 ELLE: What does it feel like to create a new world record? Could you take us through the journey of the 4000m peak climb?

Aanchal Thakur (AT): Oh my God, it is an incredible feeling! This was a very special experience for me because I was representing India. When it comes to the journey of the climb, it began with me throwing up on summit day in the morning. I was also shivering uncontrollably, but my teammates were there to push me. Even during the climb when I felt tired, I looked at all those incredible women for motivation. Eventually, it was my mind that brought me to the summit. We all were roped in a very long line. It was an amazing sight that gave me goosebumps. The view from the top was breathtaking and we were all screaming “We did it, we did it!” I will never forget the moment I waved the Indian flag there, it was incredibly special. 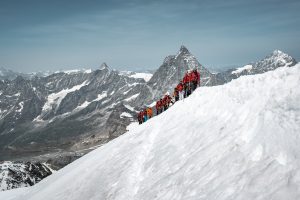 ELLE: As an alpine skier, you’re used to skiing down slopes of snow-covered peaks, but this time you had to climb one. How was that experience?

AT: I’ve done conditional training for skiing but I had never done professional mountaineering so I was really excited to do that! Switzerland has 40 peaks that are more than 4000 meters and I was looking forward to being at the top of one of them. I asked my cousins who are professional mountaineers for some technical knowledge and tips and was also doing fitness training in India to prepare for the climb. For skiing, we normally go up by a chairlift and ski down at a very great speed, but this time, I was climbing. There was something in me midway, a feeling that something is resisting me from taking a step forward. In skiing, whenever you want to go fast, you can just slide down, but when you want to climb fast, you cannot, because there is resistance in the mind and body. However, I completed the climb with courage because I knew that there was an Indian flag in my backpack. 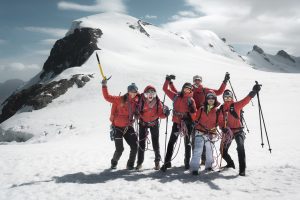 ELLE: What was the bigger aim of this 100% Women’s climb?

AT: Mountaineering still remains a very male-dominated sport and through this initiative by Switzerland Tourism, the main message that we wanted to send out was about women empowerment and uplifting women who want to take up outdoor activities. It was a great initiative by Switzerland tourism. There were more than 80 women from 25 nations climbing together on a single rope. It was really inspiring because I believe that if women support women and uplift each other, nothing can be more powerful than that. I hope this will inspire many other women, both now and in the future to get out of their comfort zone and explore the great outdoors!

ELLE: What sparked your interest in skiing?

AT: My dad was a skier and was the national champion of his time, and my brother is an Olympian, so that’s what drew me to skiing. I was only five years old when I started skiing. Eventually, I started participating in competitions and realized that I want to make this my professional career in the future. I’m really looking forward to training very hard and trying to qualify for the Olympics and represent India in 2026 in Milano.

ELLE: What do you have to say about the current scene of winter sports in India? And what changes do you hope to see?

AT: I would say winter sports are getting better in India because a few years back nobody knew much about them and could never imagine that winter sports can be a professional career. In India, we’ve always focused on Summer Olympics and summer sports but now I can see that there are some initiatives taken by a central government like Khelo India Winter Games. I think the coming future will be better for winter sports in India.