We might admit it only grudgingly, but the inside of corporate boardrooms of India have rarely seen female representation, if at all. And we could see more women there, but we are country obsessed with protesting anything that makes concessions for gender – even if it makes space for more egalitarian conversations. When a conglomerate introduced period leaves for women, the conversations about how this is unfair to men blew up. Statements about ‘wanting equality but how does this work’ were bandied about, asking women why they deserved a seat at the table when they couldn’t even sit through a meeting during their period, cramps be damned. For far too long, equality has meant that women have to agree to be treated like men – a trope that Anita Bhogle is addressing with her book Equal, Yet Different.

We spoke to her about her book, women in the workplace, salary negotiations and much more. 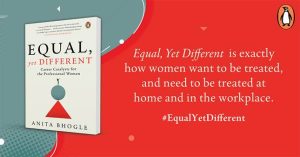 I asked her what inspired her the title of the book and Anita Bhogle said, “Actually my husband (Harsha Bhogle) and I, for 20 years have been running a speaking series called ‘The Winning Way.’ It’s a motivational series that draws learning from sport. So, we had a quote from Steve Waugh when he said that leaders should treat people equally and yet differently. Which meant that, you know, people within a team have different needs and different temperaments. And they respond to things differently. So while there are the non-negotiables, like discipline and hard work and integrity, the rest you could give some flexibility. In one of the sessions, a very senior woman executive walked up to me and said, “Isn’t this so true for women? And that stayed with me. It’s so true that women want flexibility in terms of input, but no concessions in terms of output. Equal yet different I believe and more so now that I have researched it. I’ve had very interesting conversations with so many women, about the book and for the book, that I believe that it’s the way women need to be treated and want to be treated. And we want to be treated as equals. But yet we are different in terms of the way we are wired, our conditioning, and also our requirements. So very equal in terms of ability and ambition. I have focused on professionally qualified women in the book. They have qualified, they worked hard to earn that degree. And yet, women have different requirements. So that is why the title and I find that a lot of people find it very interesting and intriguing. And a lot of women have already started writing and saying it’s very appropriate.”

The name is striking and perhaps it is time to stir up the conversations from womens’ perspectives. What exactly are we doing to put more women in positions of power? Anita Bhogle says, “The government has introduced the policies. You now require one woman, at least on the board of every listed company, organisations have put it on the corporate agenda. And yet you find that every year, you have lots of women dropping out of careers. You also don’t find enough women in positions of power, whether they are leadership roles, policymaking roles or decision making roles. So women are kind of invisible. Despite the growing numbers, you will find that there are lots of entrepreneurs now. But the percentage of VC money that has gone to companies that have been founded by women is absolutely miniscule. The pandemic also hit women harder than it hit men. With all points of view considered, you really start wondering whether the needle has moved at all, or at least well moved significantly or not. Which is why I decided to kind of take a look at this more closely because clearly the problem is beyond numbers. So it’s not only diversity, it is about inclusion. It is about equity, and all such things and mindset, which is the biggest thing really.”

And what’s the one thing that women should keep in mind. She says, “So two things I have recommended, right through the book are positivity, and a thick skin. You’re going to require it at all times. And believe that in the long run, you’re gonna have plenty of opportunities to make up for lost time. These days, careers are not linear. If you do well, you can really jump. So that is one thing. And the other thing is this thick skin. Because men are also victims of their own conditioning. Sometimes they don’t realise that they’re making this comment at you, ‘why do you need to work?’ They say insensitive things, or they make you feel inadequate or guilty. And that is something that you need to work on yourself for.”

Anita Bhogle’s book is scheduled to release on 27 June 2022.