Whose documentary would you want to see?

Recently, a mini-series on Netflix called Halston, about the infamous American designer Roy Halston Frowick started trending. After watching the show that was adapted from the book Simply Halston, written by  Steven Gaines, I wondered about two things. First, does fashion recognise its female designers enough? Second, does it have to be a flamboyant journey that routes through Studio 54 for it to be interesting enough to be made into a movie?

As much as I loved watching this series or The Assassination of Gianni Versace, I hope to see more stories centralising the fearless women who conquered the fashion world during a predominantly patriarchal era. Here are the five female designers whose documentaries will be equivalent to a semester in fashion school.

Did you know that before helming Prada and launching Miu Miu, Miuccia Prada was a member of the Italian Communist Party and was actively involved in the women’s rights movement during the seventies in Milan? Fun fact: she also trained at Teatro Piccolo to become a mine and performed for five years.  The iconic luxury house was founded by Mario Prada, who started by designing the iconic bags we now know, but it was Miuccia who introduced the men’s and women’s clothing lines in the ’90s. Her eponymous label Miu Miu was derived from her nickname, and the designs represent her own personal style. Miuccia’s expansive career is a learning institution on its own, and I would happily pay money to watch and learn from a movie made on her life.

Italian designer Elsa Schiaparelli was one of the earliest surrealist designers. She has worked with legendary artists like Salvador Dali on the popular lobster dress and Jean Cocteau, who drew the famous woman faces on one of her dresses. Even though she was raised in an upper-middle-class family full of scholars, her lust for adventure made her give up the luxuries of that lifestyle. The iconic wrap dress that we know today was first designed by her, along with the concept of built-in-bras for bathing suits. As a non-conformist, she refused to abide by the changing rules of fashion, even if that meant closing down her couture house (which was later revived). Her body of work, along with her interesting journey through life, would make an exceptional documentary. Especially the snippet where Coco Chanel and Elsa’s rivalry takes a heated turn.

Known as the ‘Queen of Chiffon’ in Milan, Alberta Ferretti was destined to work in fashion. Growing up, she learnt the craft of sewing, draping and cutting in her mother’s atelier, and at the age of 18, she opened her own boutique. She sold her designs alongside established names like Armani and Versace, and she debuted her namesake label in 1974. Almost 46 years later, her designs remain synonymous with ultra-femininity and romanticism. In 1994, Ferretti extended her expertise from fashion and refurbished an old Italian castle into her first hotel, Palazzo Viviani. With half a century of experience and success behind her name, Alberta continues to expand her visionary brand, and if that’s not an inspiring story you want to see on celluloid, I don’t know which is.

Vera Wang started her career by working as a fashion editor at a leading magazine for sixteen years, after which she bagged the coveted design director position at Ralph Lauren. Every bride’s dream bridal designer, Vera Wang, wanted to grow up and be a figure skater. Wang launched her own boutique after her failed conquest of finding herself the ideal wedding dress. With her father’s finances, young Vera opened a plush store with designer offerings from names like Carolina Hererra, Guy Laroche and Christian Dior. She later worked on her own designing skills and showcased her first bridal collection that redefined the genre forever. Over the years, she extended her horizon and ventured into perfume, jewellery, lingerie and home decor. As a multi-hyphenate, Wang’s story will influence all the young fashion enthusiasts who are afraid to experiment beyond their comfort zone. 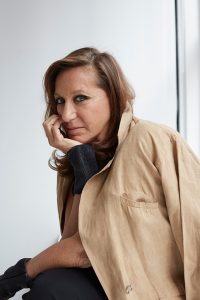 With a model mother and a garment maker as her father, Donna Karan grew up around fashion. After studying it as a subject, she took up her first job as an assistant designer with Anne Klein. After several successful years at the house, Donna headed the label with her then colleague Louis Dell’Ollio. Her own brand was launched in the mid-80s; she later came up with the idea of DKNY as an affordable alternative to her expensive line. Karan represented modern America and offered them new-age trends with chic denim designs, jersey dresses and cold-shoulder silhouettes that went on to become classics. In 2015, she stepped down from designing role to shift the focus on her other venture – Urban Zen Foundation, an initiative that supports healthcare, education, and preserving culture. As one of the pioneering names of American fashion, Donna’s legacy in visuals will be a treat to the eyes.

Which female designers inspire you and why? Tell us in the comments below.