Even Priyanka Chopra can't save this mess

Some kind of movie robot seems to have been put in charge of the new Baywatch film. It’s just woke enough, just explosion-y enough, certainly stupid enough, and definitely boob-y enough to appeal to just about any miserable person who stumbles into a theater looking for a mindless summer-movie fix. As everyone’s freebie, Dwayne Johnson a.k.a. The Rock, launches himself into the ocean to save a windsurfer sucked down into the watery embrace of the Atlantic, the film seems to be saying, “Relax, The Rock can save you—and America.” Our tender souls are tired, after all; and Baywatch is a spiritual Band-Aid made of dick jokes, rum cocktails, and body-ody-odies.

Built on the foundation of a nostalgic brand and The Rock’s cheerily relentless charm offensive (tweet me, Dwayne), 2017’s take on the red swimsuit league takes you to the beach so hard it feels like you live there. The Rock plays Mitch Buchannon, the fearless and noble (no, really) leader of the Baywatch lifeguard crew. Apparently, he has personally saved the life of every single person in town, and he’s about to preside over new recruit trials with the avuncular sternness of a coastal Ent. 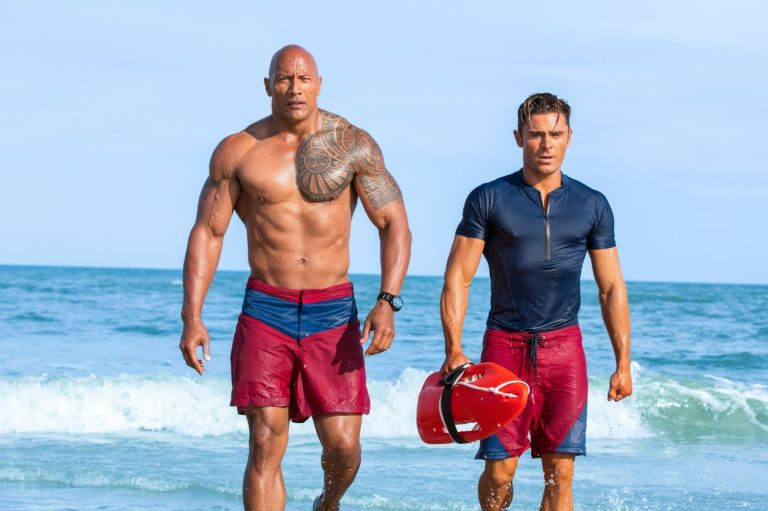 Enter Matt Brody (a gamely self-involved Zac Efron): a former Olympic swimmer, known as “the vomit comet” thanks to a post-party heave during a relay. This cross between a chicken breast and Ryan Lochte is on that PR rehab duty grind but—surprise!—he’s an arrogant asshole. Thanks to a deal Brody’s made with Mitch’s captain (Rob Huebel, with a bullet in the smarmy sleazebag charts), our Moral Meataxe has no choice but to accept him on the team. Will Brody’s selfish, jerk-off party boy learn how to care about anybody but himself? Oh, you bet he will. Efron has an enjoyably prickly rapport with the Rock; their sparring is traditional macho fun (“Hey, High School Musical”) that culminates in one of the most gratuitously disgusting dead-body bits ever to pollute the screen. It’s not for the squeamish, or, perhaps, any person ever.

If you care about the plot (which, not totally necessary), it’s this: Mitch gets wind of a drug smuggling operation, and he’s determined to get to the bottom of it. The more important point about this is that it serves up a reason to get gorgeous women into tiny, sparkly dresses for yacht parties and for a wham-bam set piece involving fireworks and a helicopter. Sweet!

Obviously, Baywatch is stupid as hell. If you do a shot for every ballsack-joke you hear, you’ll be smashed in about five minutes. Yahya Abdul-Mateen II plays a cop so totally useless he may as well not be there. At one point, Zac Efron says, “There’s no I in team, but there is a me.” But the film has decided on a winking kind of foolishness that, while transparent, is pretty cute if you can let go of that pesky skepticism. “She always looks wet but not too wet,” says someone of the Baywatch guards’ signature look, tousled and glistening just so. “She looks like she’s running in slo-mo.” 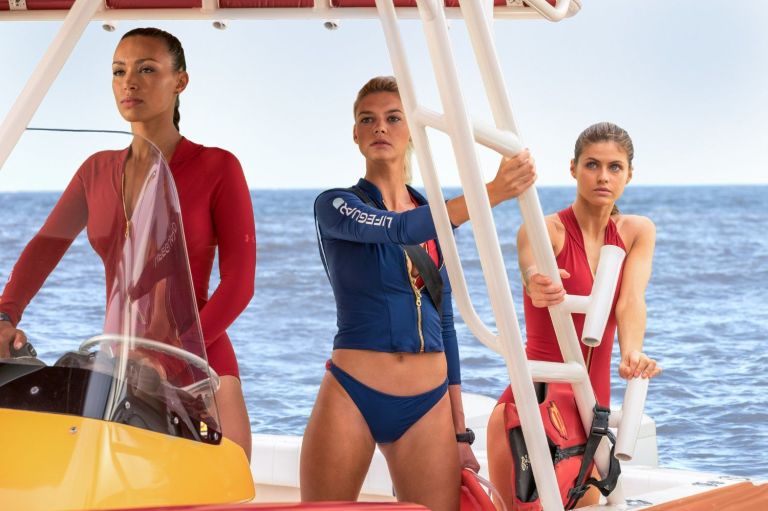 The women of Baywatch, as expected, get more short-changed than someone buying a $10,000 bikini. A movie based on a series in which the gals were essentially the bouncy castles undulating beneath thin red sheaths was never going to set the world aflame with its feminist outlook. This time around, though, the dudes apologize to chicks after they use “womanish” as an insult. (At least they know they are rude…? Low bar.) Ilfenesh Hadera, so beautiful she seems like a rebuke to literally every other living being on the planet, barely gets anything to do except be the Lawful Good with a deputy’s badge. Alexandra Daddario, as trainee Summer Quinn, bores holes in Zac Efron with her seaglass eyes when he so much as looks at her chest, so there’s that.

Poor CJ Parker: Kelly Rohrbach’s version of the iconic role pulled the short straw in the movie-trope lottery: Her Miami angel slaps her own butt and somehow falls for Jon Bass’s baggy-shorted klutz, Ronnie Greenbaum, despite his inability to speak comprehensibly around her and a lack of defining characteristics other than “computer nerd” and “dork.” And the original CJ, Pamela Anderson, gets a cameo that is so weirdly short you have to wonder why they bothered. Priyanka Chopra, though, as real-estate titan villainness Victoria Leeds, makes everything around her look like a really, really nice car commercial. 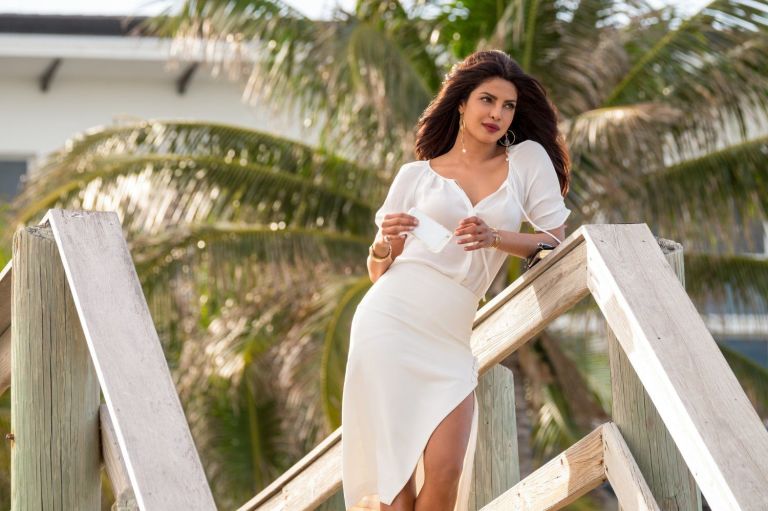 Look, nobody thinks this movie is good. It has about a 10 percent—and falling—rating on Rotten Tomatoes. It doesn’t make sense! It’s kind of about nothing! And yet, there’s something devilishly entertaining about it, especially if you’re in search of a Real World Deprivation Chamber that lets you forget that the real world is a trash fire. I know, it’s very confusing. Do I have Stockholm Syndrome for the patriarchy? Could be. But Zac Efron takes off his shirt a lot. The Rock consistently behaves like a giant, nice man. He, too takes off his shirt. The bad guys fail and the good guys win. The Hoff is there. The ocean: It’s so blue. Dive in, why don’t you?