How fashion has finally recognised the chic Muslim woman

How fashion has finally recognised the chic Muslim woman

From Dolce & Gabbana to Debenhams...

In the one-off special, Nicola struggled to style Nabiilabee in accordance to the hijabi dress code — think flowy fabrics, loose fits, high necks and low hemlines — with a budget of £100.

Two years on and modest fashion has become one of the fastest growing divisions in the industry, complete with its very own digital style gurus, such as Dina Tokio and Basma K, who have challenged hijabi stereotypes by proving that it’s possible to be covered-up and look chic.

Surprisingly, it’s not just Muslim women who have been influenced by the rise of modest fashion, thanks to mainstream high-street and designer brands who have finally started to capitalise on the value of the Muslim pound. According to the 2015-2016 State of Global Islamic Economy Report, produced by Thomson Reuters in collaboration with Dinar Standard, Muslim consumers spent an estimated $230 billion on clothing, and Muslim women splashed out an approximated $44 billion on modest fashion.

Tying in with its success, Ramadan clothing collections have quickly become a hit on the high street, with brands such as Mango, Zara, DKNY and Tommy Hilfiger upping their modest fashion game with lines that feature traditional abaya — a free-flowing maxi dress — and kaftan silhouettes.

Esteemed Italian fashion house Dolce & Gabbana got in on the action when it debuted its hijab and abaya ready-to-wear collection in 2016, which was major to say the least, though interestingly received.

With the Islamic holy month of Ramadan 2017 in full swing, it’s great to see that modest women have more choice when it comes to shopping for day-to-day wear or special occasions like Eid. 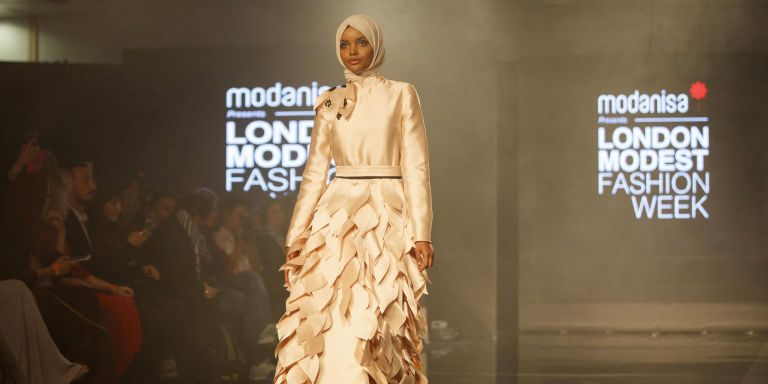 Where to buy modest fashion

Australian pharmacist turned fashion designer, Zulfiye Tufa aka The Hijab Stylist, created a unique garment called the BB cape to fill a gap in the modest market. The BB cape covers the 'Boobs and Butt' areas in compliance with Islamic dressing guidelines, and is an effortlessly chic modest style solution.

One of the leading brands in modest fashion, Inayah launched five years ago with the ambition of offering Muslim women a modern take on the Islamic dress code. We love Inayah's selection of flowy maxi dresses, embellished evening-wear and high-quality hijabs in an array of super chic neutrals.

If you're looking for modern modest wear for the office, then up and coming British brand, AMIRAB is worth bookmarking. Founded by Kenyan-raised Somali fashion designer, Roda Abdi, AMIRAB boasts a stunning range of moveable jumpsuits, tailored skirts and luxe hijabs.

Aab has been offering contemporary modest wear, for every occasion, to Muslim women worldwide for the last ten years. Currently available online exclusively, Aab will soon be stocked in several Debenhams locations across the UK, making the department store the first to stock a full range of Muslim clothing.

Think of Turkish brand Modanisa as the ASOS of the modest fashion world. With over 300 brands to choose from, Modanisa stocks 30,000 plus hijabi-friendly fashions that have been handpicked to suit every style of modest dressing.

Launched in 2014 by the Abdallah sisters Esmaha, Amnna and Sara, Buno Design was founded out of the frustration of the lack of on trend, modest clothing available in the UK.

The collection features A-line skirts, cropped and wide-legged trousers, with an option to request bespoke creations for special occasions.

The Modist recently made headlines, thanks to their latest fashion campaign that features modest woman of the moment, Halima Aden, dressed head-to-toe in millennial pink.

The luxury digital destination is the first of its kind and features a carefully curated assortment of high-end designers including items from Mary Katrantzou, Christopher Kane and Oman, that can be pieced together to create a catwalk-worthy modest look.

Diana Kotb is a luxury designer that makes eccentric garments for modest women. From hijabs to hats, and sharp suits, to formal evening gowns, Diana Kotb's designs are fairy-tale-like with plenty of personality and a rebellious attitude.

Ria Miranda is a modest fashion house that was founded by Indonesian designer Indria Miranda in 2009. The brand is renowned for its signature use of a pastel colour palette and dream-like prints, that provide a simple yet whimsical look for Muslim women.