‘The only way to conquer fear is just to go through with it.’ The opening line of Netflix’s newest offering, Skater Girl, best sums up the film. Helmed by actor Mac Mohan’s daughters, Manjari (writer-director) and Vinati Makijany (co-writer-producer), the movie is a warm, honest and hopeful story about Prerna, who resides in a remote village in Rajasthan and is afraid to step away from traditions until a London-bred advertising executive introduces her to a new passion: skateboarding.

“Skateboarding is something that can break through so many different social barriers and give kids wings to fly, in a way. When we first stumbled upon the idea, skateboarding was picking up in India, and the impact of the simple sport across communities inspired us,” shares Manjari. “We took a unique approach while writing this story. We spent around a year simply meeting people, researching, and trying to make the story as authentic as possible. The goal was to make people watch it and relate to it, whether or not they were skateboarders themselves.”

While a large part of the story is about how Prerna finds the strength and courage to follow her dreams, Manjari feels that the messaging in the film is focused on raw emotions. “We wanted people to connect with all of these women and see how each one of them overcomes their own struggles. While the main message in the film is of hope, I also want the audiences to connect with the notion of not being afraid to chase their dreams.” 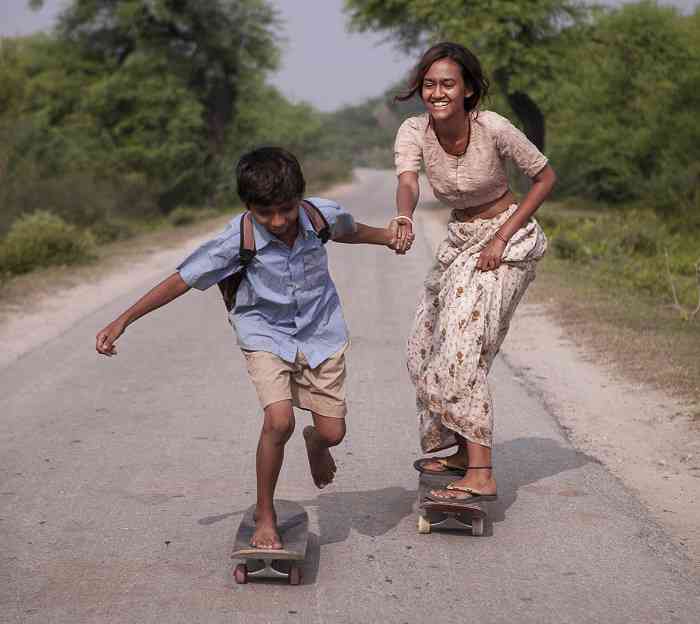 Manjar and Vinati’s screenplay manages to stay simple yet has a dramatic, emotional range, a feat that they feel was achieved thanks to their own passion for filmmaking. “I believe in writing something that excites me. I am based in LA, and I see skaters around me daily, and being able to take something like that and see how it translated back home blew me away.” For Vinati growing up around films helped her to build her passion. “We spent a lot of time as a family watching movies and talking about art and absorbing cinema around us. Our parents used to take us to the theatre, and we used to observe actors closely, never realising that we were taking in lessons.”

What adds to the film is the genuine messaging. It ends with a montage of kids of Khempur, where the film is shot, skateboarding. The Desert Dolphin skatepark that was a part of the film wasn’t just a set but a permanent construction that is open to the public and is a free space to train. Since 2019, four kids from Khempur have gone on to represent Rajasthan in the National Skateboarding Championship. “I think the sense of community is what is keeping us all together during this pandemic. Just the feeling of having your loved ones around you motivates you to go ahead and spread positivity with others,” signs off Manjari.