Have you ever pushed a human being out of your vagina?

We’d just met. I didn’t even know his name. He was cute in an “I served in the Peace Corps and I talk about it to get laid” kind of way. He looked down at my swollen belly.

“You aren’t getting an epidural, are you?”

It took me a minute to register that the man I had just been introduced to at a restaurant I was reviewing had actually asked me if I would use pain medication when I gave birth to my child. I was surrounded by colleagues. I should have been polite, but something in me snapped.

I cocked my head to the side and placed my hand protectively over my stomach. “Have you pushed a baby out of your vagina?”

Because if he wanted to talk about epidurals, then of course he wanted to talk about vaginas and childbirth in a real way and not just the kind of abstract speculation philosophy majors and our current president are wont to do. I continued. “If you have pushed a baby out of your vagina, I would like to hear why you don’t recommend the epidural? If you haven’t, you should shut the fuck up.”

My colleagues looked at me with a mix of horror and admiration. The cute 25-year-old stared at the ground. I felt better but also deflated. Why did men say this shit? Why did I have to respond to it at all?

It took until I was about 30 to feel enough confidence in my skin and my body to consistently make eye contact with men when I walked past them on the street or passed close to them in crowded hallways. By the time I got pregnant, I felt confident and strong and I liked the way I looked and didn’t care what anyone said to me about anything having to do with my body. In the past month that’s changed. I’m exhausted by it. I began avoiding eye contact with men on the street around the start of my third trimester. Too many of them took it as an invitation to remark on my condition. It’s similar to a catcall in that way, their words taking ownership of my body.

“You must be having twins.”

Why don’t they just call me fat and be done with it? I’m a big pregnant girl, but no bigger than most. The size of my belly tends to expand and contract throughout the day depending on how much I snack on cheese or pee or drink water, or if I’m wearing those funny jeans with the sweatpants on top. 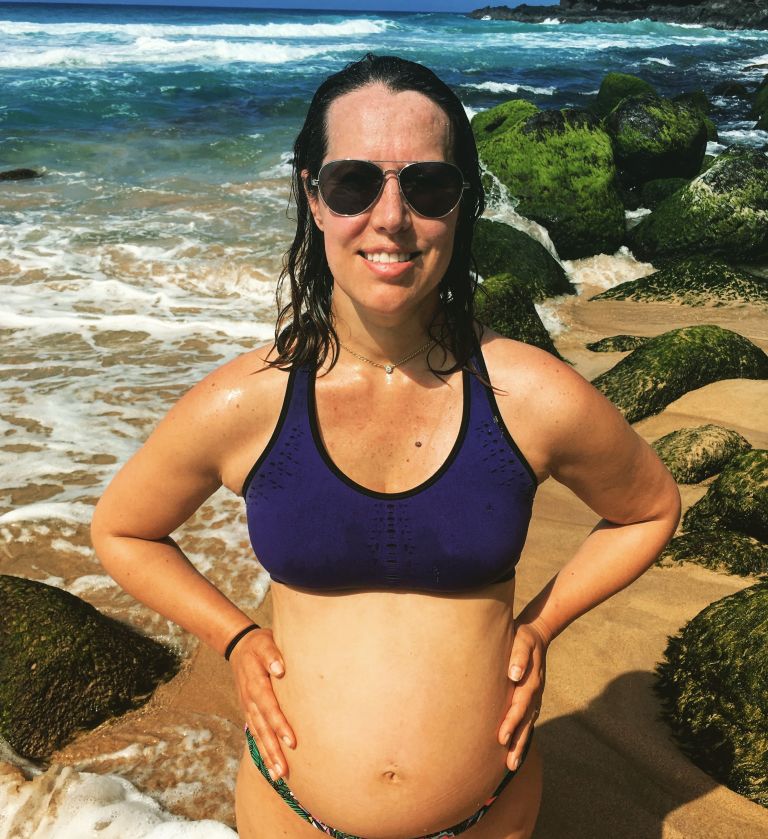 The happily pregnant author pictured at the beach

I’m not alone. Every current or formerly pregnant woman I know has her own horror story. I was chatting about it with Lyss Stern, mom of three and the author of Motherhood Is a B#tch. She had her own doozies. “I can tell you’re having a girl because your face is so bloated,” and “Are you sure you’re not having triplets?” and “Are you really only four months? You look nine months.” Jill Simonian, the author of the new book The FAB Mom’s Guide, for pregnant women and new moms, was stretching post-workout at the gym when a roided-up meathead asked, “Should you be doing that in your state?” Her own husband told her that she looked like a “snake who swallowed a big egg.”

It’s become almost a badge of honour. What’s the worst thing a man has ever said to you while you were pregnant? It’s a bonding experience among pregnant strangers.

My friend Angela wins the trophy for best comment. Some random guy asked her if she’d had sex with a “midget” because she was “carrying small.”

There was the guy at the cleaners who placed both his hands square on my stomach and stared at me with intention. “He’s a Giants fan,” he pronounced. There was the old man who worked at Home Depot who gave my stomach a high five.

I love my big, round, weird belly, and for the most part I like being pregnant. My body is in the process of doing something amazing and growing to accommodate a new human. It’s wonderful and absurd and magical all at once.

Maybe it’s the magical absurdity of being able to do something a man will never do that leads to the unsolicited comments and advice they give me on the street, in church, in the checkout line at the grocery store.

“Too much hot sauce could be bad for the baby,” one gentleman told me when I ordered my tacos extra spicy. “You should definitely breastfeed,” a man on the bus said while staring at my new porn-star pregnancy tits. “You must be having a boy. Girls make their moms ugly,” said the guy in line at the bank.

Women give me unsolicited advice too, but it tends to bother me less. If you’ve had a kid, you have opinions. That’s all there is to it. Some are helpful and some aren’t and I take the ones that aren’t with a grain of salt. I genuinely believe most women are trying to be helpful rather than hurtful.

My husband doesn’t seem to understand why the comments bother me so much. “He’s just joking. They’re trying to be nice. They don’t know what to say. They just want to start a conversation with you,” he’ll say to me. He can’t and will never understand what it feels like to have someone pass judgment, with good humor or not, on his body. It’s not something that happens to men.

But the fact that he thinks there is nothing wrong with the comments is part of a bigger problem. There’s long been a tacit agreement that women will suffer these unspoken indignities with a smile.

But what if we didn’t? I can’t tell every man who tells me I look like I swallowed a watermelon to fuck himself, as much as I would like to. But I can’t grin and nod and rub my belly and act like it’s okay to pass judgment on my body or ability to be a mother.

So I no longer act like it’s okay. I make direct eye contact and pause and say things like, “It’s not cool to say that to a pregnant woman,” or “You just made me uncomfortable,” or “Next time, keep that thought to yourself.”

They’re taken aback every time. In fact, I might as well have said “Fuck off” for how offended someone is by being told they’ve said something inappropriate. But I no longer care. It’s my body and my baby and I would prefer they keep their mouths shut.

Jo Piazza is the author of the new memoir How to Be Married.