You’d think as a writer my preferred working environment would be the dimly lit corner of a quiet room with a large window to longingly gaze out of, as I string together words to form sentences. In reality, I’m currently writing this article in the middle of a bustling day at the ELLE office while listening to Miley Cyrus’s Flowers on loop, scrolling passively on social media and keeping up with (read: eavesdropping on) the fight between my colleague and her boyfriend over the phone. Side note: He had it coming.

As you can probably tell, if I could bring my racing thoughts to the F1 circuit, I’d win all the prize money. But how much of a need for mental stimulation is too much? In today’s fast-paced digital age contributing to reduced attention spans, the limit doesn’t exist. My phone is as valuable to me as an internal organ and it shows in my 7+ hours of daily screen time. I’d rather take a toxic ex back than sit idle. In short, I avoid boredom like the plague. 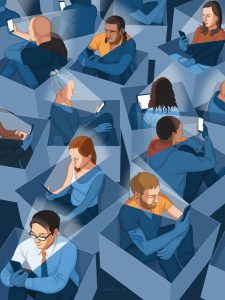 Writer Leo Tolstoy described the state of boredom as “a desire for desires,” while a group of researchers led by York University professor John Eastwood define it as “an aversive state of wanting, but being unable to engage in satisfying activity.” It’s like wanting to do something but not wanting to do anything. Examining it further, in a section of Either/Or: A Fragment of Life, the Danish philosopher Søren Kierkegaard sees boredom not as an absence of stimulation but as an absence of meaning— which explains why we end up overstimulated but existentially bored. And the vicious cycle to escape that feeling continues.

A study published in 2014 demonstrated how hard people can find it to sit alone in a room with their thoughts, even for a mere fifteen minutes. 67% of men and 25% of women chose to shock themselves rather than just sit and think, even though they’d been allowed to test out how the shock felt earlier, and most said they’d pay money not to experience that particular sensation again.

Seldom left without our devices to experience classically boring situations, our tolerance of the feeling of being bored seems negligible. Today’s generation especially has grown up in the lap of technology with at least twenty-three distractions available at any given time to occupy their mind. Bored? What’s that? As a result, when there isn’t enough and constant mental stimulation, there’s an urge to escape— whether that’s by jumping to another app, a job, or a situationship.

Being bored isn’t the most pleasant feeling to float in— not having anything to do or losing interest in the task at hand can be dull and uncomfortable. Totally normal. But with the current hustle culture glorifying being busy all the time and encouraging you to constantly be on the go, feeling bored often comes along with the guilt of not being productive enough. It also doesn’t help that the quote, “Only boring people get bored” exists. So we choose to rather burn ourselves out than encounter boredom.

“We are less bored than our ancestors were, but we are more afraid of boredom. We have come to know, or rather to believe, that boredom is not part of the natural lot of man, but can be avoided by a sufficiently vigorous pursuit of excitement,” writes Bertrand Russell in The Conquest of Happiness. But what really is this feeling we’re running from and does it deserve the negative connotation it has?

Don’t Banish Boredom, Listen To It

In their book Out of My Skull, Psychologists James Danckert and John Eastwood write, “When we’re bored, our minds are telling us that whatever we are doing isn’t working—we’re failing to satisfy our basic psychological need to be engaged and effective. Too many of us respond poorly. We become prone to accidents, risky activities, loneliness, and ennui, and we waste ever more time on technological distractions. But we can let boredom have the opposite effect, motivating the change we need.” An adaptive approach to being bored can help us avoid its troubling effects and help us become more aware and involved in the present. Boredom isn’t bad for us, It’s just that we do a bad job of heeding its guidance.

The topic of countless books throughout history, boredom has been known to have an adaptive function in human life— it helps us tolerate open-endedness and encourages imaginative play. And yet we live in a culture that seems obsessed with eradicating it. We equate boredom with the opposite of creativity and curiosity, not realising that it may actually be the road to it.

Alicia Walf, a neuroscientist and a senior lecturer in the Department of Cognitive Science at Rensselaer Polytechnic Institute, says it is critical for brain health to let yourself be bored from time to time and that it can improve social connections. “When neuroscientists do studies looking at brain activity, they often compare what areas are “on” when people do a specific cognitive task and when they are told to do nothing. Remarkably, there is extensive activity in the ‘do-nothing’ part of the experiment. Being bored can help foster creativity. Many scientists and artists have reported being inspired or solving a complex problem when they have actually stopped thinking about it. This eureka moment is called insight,” she writes. 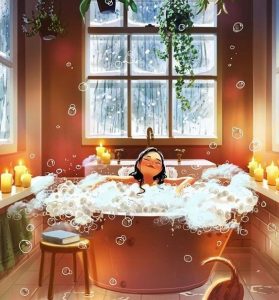 If you’ve seen Eat Pray Love you know that Italians have a name for it: “il dolce far niente”—the sweetness of doing nothing. It’s more than just about killing time, it’s about prioritising being alongside doing. Like Mozart once said, “The music is not in the notes, but in the silence between.”