Tirelessly reworking both mod and punk references, Virginie alchemised the powerful play between the masculine and feminine with her signature punk-rock edge. The self-effacing designer was amused by the thought of Chanel chiquitas strutting down the club’s famously narrow and spiral stairs in their après-ski coats and then leaving them in the cloakroom to reveal the come hither chiffon pieces underneath. 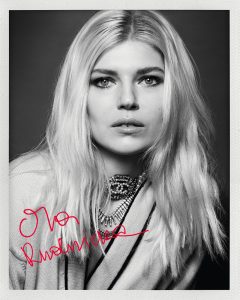 The collection underscored a delicious sartorial dichotomy with a clash of high and low hemlines, an interplay of transparency and opacity and a push on skilful layering, thus evoking an element of surprise as girls dressed up and then partially undressed. It was almost like one had entered a dress-up box where girls gave finishing touches to their ensembles, fine-tuning the makeup before tiptoeing out to complete their languid yet powerful walk. Even the shaggy Moon Boots turn out to be double-layered so that the  voluminous shearling can be removed to unveil a sleeker boot beneath.

“I love contrasts, so for the more voluminous winter pieces, I wanted a small space. I don’t know if this is because of the times we live in, but I wanted something warm, lively. I imagined the models doing a show for themselves, going from room to room, crossing each other in staircases, piling their coats up in the cloakroom and going up to the next floor to get changed. And I thought of the shows that Karl would tell me about, back in the day, a long time ago, when the models would dress themselves and do their own make-up,” says Virginie Viard describing the atmosphere of the show. 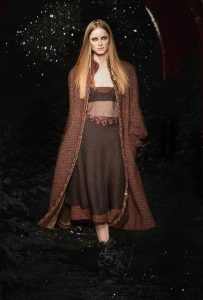 Staged by celebrated photographer duo Inez & Vinoodh, the showcase featured a long tweed chevron coat revealing bare legs which was offset with voluminous boots featuring black faux fur. An immaculately tailored trouser suit in noir tweed with micro checks in blue lurex was adorned with thin pearl braces. A white coat in patent sheepskin, lined with faux fur was the highpoint and so was the closing metallic trench worn with a felt hat.

A luscious colour play juxtaposed with hypnotic surface texturing reaffirmed the outing’s timeless appeal and elevated its ultramodern essence with insouciance and humour. It was hard to overlook the ski holiday chic undercurrent pervading the line-up—case in point being the salopettes (ski trousers) in white quilting embroidered with red and blue motifs. “This collection is a mix of two influences: the ambiance of ski holidays, which I adore, and a certain idea of cool Parisian chic, from the 1970s to now,” Virginie adds. 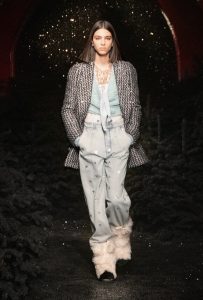 This digital presentation also brought to mind, one of Karl Lagerfeld’s Chanel films titled, ‘Women Only’ (Fall Winter 2013/14) when he picked the backdrop of a Parisian cinema to present his collection. For Virginie, empowering her unfailingly elegant Chanel girls is of paramount importance as she understands that they revel in the confidence that comes with the dance-till-you-drop chiffon numbers and sequinned ballet flats. Since her arrival at the design house, she’s made it youthful, refined but relaxed—an astonishing blend of modernity and heritage, an unprecedented dialogue between savoir faire and her own individualistic personal style.

Always consistently proposing a vision of chic without overlooking comfort, Virginie has worked towards refining and redefining body-friendly shapes, proposing opposing silhouettes with an easy mix and match appeal and this collection echoes this sentiment in totality.