This was a weekend of contradictions for me, contrasts that sit at such extremes, that I wasn’t quite able to pin down how I was feeling. News about a 30-year-old woman dying by suicide came in, the details of the case so grisly, you want to put your phone away. I turned to OTT platforms to shut out the news reports and decided to watch Darlings. And it was while watching this Alia Bhatt Shefali Shah-starrer that the dichotomy of domestic violence stood out.

Mandeep Kaur was living in New York married to man who was abusive. Ranjodhbeer Singh Sandhu, Mandeep Kaur’s husband, subjected her to humiliation, violence and made relentless demands for dowry. On screen, Badrunissa, played by Alia Bhatt, faces the wrath of her husband who regularly beats her for the seemingly mundane (stones in a biryani) and the outlandish (for replacing him at a public gathering) and while in reel life, Shefali Shah suggests various schemes to Alia Bhatt to get rid of her husband, divorce is rarely talked about as an option. 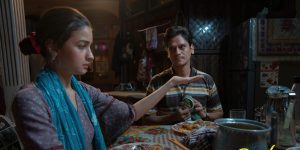 In real life, the story of Mandeep Kaur and the domestic violence she faced are shocking. Confinement, beatings and emotional abuse- it didn’t stop. Videos of what is allegedly Mandeep getting beaten up have emerged, her two daughters can be heard in the background pleading with their father not to hit their mother. Mandeep’s family was aware of the abuse, they even intervened once. The father said that Mandeep asked them to step back, and that she reconciled with him. She was worried about the future of their daughters. And we wonder why she didn’t leave.

Real Or Reel: Divorce Is Not An Option

In Darlings, Badru continues to endure the domestic violence, it even is used as a way to introduce humour into this movie. We feel for Badru, wanting her to leave, waiting for her to realise how evil her husband truly is. You want to shake her up. And even while this is happening, her mom is there to support her. Shefali’s Shamshunissa has a lot of spunk and we watch her frustration build. And we wonder why Alia Bhatt doesn’t leave. 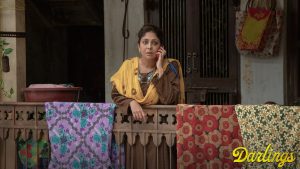 Sure, there is trauma bonding and perhaps that has been explored a bit in Darlings, but I guess the bigger problem here is that even as the number of women that face domestic violence stack up, we simply do not offer the choice of divorce to our women. The tag of divorce, the social stigma surrounding it is simply given greater value, even more than the lives of our daughters. In Darlings, this sentiment is openly expressed by Shamshunissa- that the tag of divorce comes at a price- a financial and social one. She says this even as she tends to the wounds that her daughter gets on the daily.

In Mandeep Kaur’s final video, she says she takes the extreme step of dying by suicide because the abuse was never-ending and enabled by his family. Ranjodhbeer had extra-marital affairs, was constantly violent but Mandeep stayed, hoping he would change, she says in the video. She blames her husband and her in-laws for her death. And while there may be trending hashtags and conversations at higher levels now, the truth is that we failed Mandeep. The support system she need to leave a traumatising marriage, to escape the domestic violence would have been too few and too far. And in a nation where women are taught that the success of their marriage is of paramount importance, her sense of self be damned, we imply that divorce isn’t an option. We tell our women every day that we care more about their marriage than their life, that divorce has implications more serious than the broken bones and bruises on her body. What are we expecting from our daughters then?