Ashdeen Lilaowala On His Homecoming, Preserving Zorastrian Culture And The Demand For Gara Beyond The community

Ever since he launched his eponymous label in 2018, Kshitij Jalori has made a mark with his contemporary perspective on traditional textiles, especially Benerasi weaves. His label has become synonymous with travel-centric themes, tropical prints, art and architectural detailing (as seen in his Arco series). However, every collection brings something new to the table whilst still keeping his signature aesthetic alive. And he has done the same with Kellee, his latest collection inspired by American artist Ellsworth Kelly.

Imagining the renowned artist within a garden in Mexico is where Kellee finds its inspiration. One look at Kshitij’s collection, and you’ll instantly feel like you’re inside one of Kelly’s paintings. The garments capture Kelly’s style of colour-blocking perfectly with bold and bright geometric shapes and tropical prints, giving the blend of art and fashion a fresh take. In an exclusive chat with ELLE, Kshitij Jalori tells us all about Kellee and more. 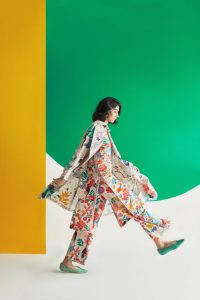 ELLE: What made you turn to Ellsworth Kelly for inspiration?

Kshitij Jalori (KJ): Each collection I work on is inspired by an artist or an art movement from the past century. The reason being that I have been an art student and paint in quite a few mediums. Every year I look at an interesting architectural and art angle, club them, mix cultures and then create a line of clothes. I’ve wanted to do something around the work of artist Mark Rothko, and if you look at Kelly’s work, he’s known as the modern-day Mark Rothko. Mark’s strokes had a lot of tonalities, whereas Kelly used a more hard-edged colour medium. So Kelly became my muse. 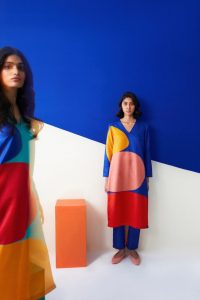 ELLE: Why is it that you reimagined Kelly in a Mexican garden?

KJ: Mexico is a tropical nation, and a lot of my work revolves around tropics, something I’m hugely inspired by. So it only made sense that I club the two and imagine an American artist in the Mexican garden.

ELLE: Any artwork in particular that truly inspired you? How did you translate that into your designs?

KJ: Kelly used to look at various angles, and architectural shadows and the shapes were basically painted by him using a single colour. We’ve taken inspiration from those shapes and represented that in the silhouettes of the Arco series in the Kellee collection. As opposed to the florals from the previous collection, which had a lot of depth and details, the florals in Kellee have only one or two colours to represent Kelly’s painting style.

Here are some paintings we took inspiration from.

ELLE: You’ve mostly experimented with Brocades in your past collections. Tell us about the textiles explored in Kellee.

KJ: Keeping summer in mind, the textiles I’ve used in this collection are Silk Satin Organza. It’s not like your regular organza, which has a very harsh feeling; instead, this one has a nicer touch and nicer feel and drapes better). We have used Cotton Silk Satin (70% cotton and 30% silk) with the addition of a satin piece to lend sheen and make it look more formal and luxe. We also used Silk Satin Crepe fabric, which is mostly used for my winter collection but for Kellee, we have created a matt and shiny effect. 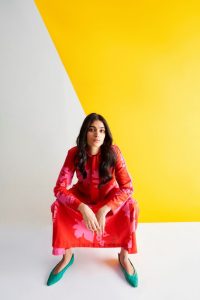 ELLE: You’ve named the pieces after colour models (RGB, CMYK and HSB). How did you come up with that?

KJ: We were having a hard time naming pieces. You literally see three colours like red, green and blue or orange and white or a half curve in black in Kelly’s artwork. But then we thought, why not actually name them with colour references just the way he named his original artworks. In the 60s, his paintings had names like Black with White and Blue and Orange and Green. Those were the prime colour mediums at that time, but today, in the 21st century, we primarily work in the CMYK or RGB or HSB palette. That’s how I did the correlation and decided to name my pieces accordingly. 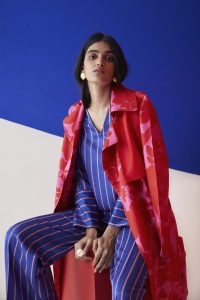 ELLE: We know it’s hard to pick, but what’s your favourite piece from the collection and why?

KJ: I personally really like the Artbook print. It’s very interesting because it’s like an unfinished painting where the artist has laid out the outlines for the whole artwork, but only a few motifs have been coloured. It feels like a work in progress. 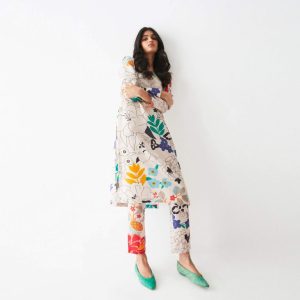 ELLE: What are you working on next? Can you give us a brief idea about it?

KJ: I’ve wanted to add another textile to the label for the last two years. Brocade is primarily the only textile that I work with, and of course, there are other things we do like prints, Arco, and embroidery, which have gained a lot of attention but other than that, I want to add more textiles. This year, we might even start bridal wear, something I’ve refrained from till now, but we’ve been continuously getting requests from brides to start a line. I plan to start a swimwear and resort wear line. Our prints and the Arco series would be a very interesting extension to it. Until next winter, you will see some very interesting art forms and pieces wherein I create a new language and body of work that uses references from the past and adds my own experiences to it.