In times when dark shows with bloodshed, torture and gore seem to be the most liked content on OTT platforms, it feels nice when some light-hearted romance comes to our screens. It’s even better when the tales are unconventional, unlike the cliche boy-meets-girl-next-door theme. And if unconventional is your jam, then you must add Modern Love: Mumbai to your watchlist.

The Indian version of the international series Modern Love—which is adapted from a bunch of global essays from The New York Times’s eponymous column—is an anthology of six stories by filmmakers Vishal Bhardwaj, Hansal Mehta, Shonali Bose, Dhruv Sehgal, Alankrita Shrivastava, and Nupur Asthana. Each episode explores a different take on love in the city of dreams, be it self-love, or love that sees no age or gender.

A post shared by amazon prime video IN (@primevideoin)

They’re all heartwarming stories and binge-worthy. But as an avid foodie, I couldn’t help but notice how much the characters in Modern Love: Mumbai bonded over food. Whether it played a role in bringing a couple together or was used as a means to convey affection or was simply portrayed as the subject of love, food was the common love language in every story. Here’s a breakdown of all the episodes that prove that a way to someone’s heart is indeed through the stomach.

It is only after her husband Lutfi leaves her (on the pretext of being bored of their marriage) that Lali (Fatima Sana Shaikh) discovers her journey of self-love. She is left with his worn-out bicycle, which she struggles to ride every day to work. But one day she finally crosses the flyover. Here the writer also tries to metaphorically indicate that she has also overcome her fears and is ready to move on from her marriage. In that process, she discovers her knack for making comforting Kashmiri Kahwa which she starts selling under the name of Raat Rani to earn some extra money. People flock every night to have a lovely cup of tea. Indeed, food has always evoked self-love and spread love among others, hasn’t it? 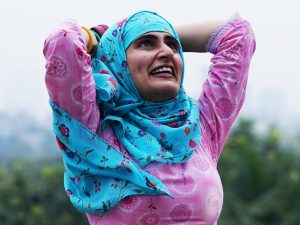 Love is the secret ingredient in Baai

Chef Ranveer Brar makes his acting debut with Modern Love: Mumbai and plays the role of a homosexual character in the second story, Baai. He is cast opposite Pratik Gandhi, who plays Manzu, Rajveer’s love interest. Since Brar is a chef in the series too, food has a vast contribution in getting them together. For instance, Rajveer impresses Manzu with his Nihari dish when he first meets him. While Manzu has come out to his family, everyone except his dad has accepted him for who he is. And he also struggles to tell his ailing grandma (baai) about his husband Rajveer, fearing the worse, and perhaps her reaction and judgement on hearing the news. But towards the end, we see a very heartwarming exchange between Baai and Manzu, when the former understands Manzu’s feelings for Rajveer. Manzu mentions he has a roommate who cooks very well, to which Baai asks whether he makes better food than her. Manzu endearingly says that no one can cook better than her. So she asks him if he knows what’s the secret ingredient in her food. He says spices. She says, “No. It’s love.” And earlier, Rajveer too says the exact words to Manzu’s mom. 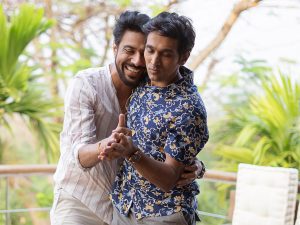 Yeo Yann Yann, who essays the role of an Indian-Chinese mother Sui, finds it difficult to accept her son Ming’s (Meiyang Chang) girlfriend, Megha (Wamiqa Gabbi). Yann refers to her as a ‘vegetarian witch’ as she doesn’t hail from their community but is a Gujarati who doesn’t even add garlic to her food. Yann loves cooking momos and noodles for her son and gets very upset when he refuses to take her tiffins to his house. “This is my heart,” she says. But Ming too attempts to explain to her that he wants to show his love for his girlfriend by cooking for her instead of always taking food from home, which just ends up occupying space in his fridge. But when Sui begins to cry, Ming comes to agreement to take her food as he can never see her heartbroken. Towards the end, we also come to know that Yann has accepted Megha as she sends an additional tiffin that includes her favourite eggplant preparation. 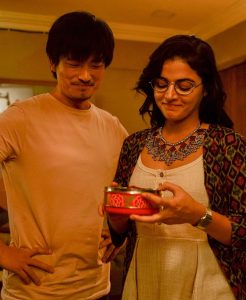 Coffee breaks the ice in I Love My Wrinkles

This episode tells the story of a 20-something Kunal (Danesh Razvi) who falls in love with a Dilbar Sodhi (Sarika), a progressive woman in her 60s. One afternoon over a cup of coffee, things get awkward when Kunal confesses his sexual interest in Dilbar. Of course, this rattles Dilbar and she feels she led him on and feels ashamed. But later, she addresses the situation and invites Kunal over for a cup of coffee. She confesses she too fantasized about him but wants to keep it limited to just that and nothing more. After all, a hot cup of coffee clears everything, doesn’t it? 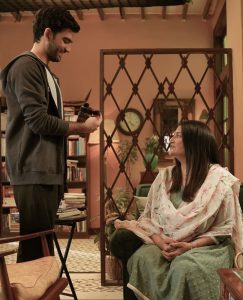 When food becomes the conversation starter in I Love Thane

Masaba Gupta plays the role of a 34-year-old landscape artist, Saiba. She’s on a journey of finding the right modern man amidst the plethora of men on dating apps. Instead, she falls for a not-so-modern man, Parth (Ritwik Bhowmik) whom she meets on her job and works with him on a project in Thane. Whether it was about getting to know each other over Misal-Pav in a Thane restaurant or enjoying their first official date over a cup of chai, Saiba and Parth’s love story is an unconventional one with food being a binding factor in bringing them together. 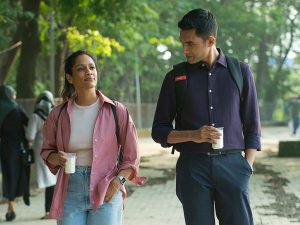 When they find love over tea in Cutting Chai

Imagine finding the love of your life over cutting chai. That’s exactly how novelist Latika (Chitrangda Singh) and hotel owner Danny (Arshad Warsi) meet. After marriage, Latika is caught up in household chores and taking care of the kids. She is frustrated as she doesn’t have time to finish her long-due novel. On one eventful day, she finds herself re-evaluating all her choices in life, even her marriage. As bittersweet memories and ‘what if’ fantasies run parallel in her mind, she understands that questioning her past is futile. When she recalls how she met her husband, that is, over a cup of cutting chai, all those cherishable memories come rushing back and she feels happy with how her life is at present, despite the ups and downs. 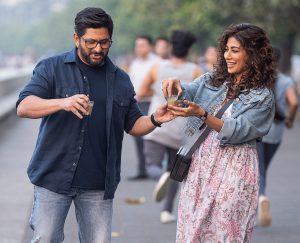