Featuring one of TV’s most unlikely detective team-ups, Only Murders In The Building returns for its second season with Steve Martin, Martin Short, and Selena Gomez investigating a new murder at the Arconia while documenting their findings for the sequel of their true-crime podcast. As you can imagine, the situation gets hilariously complicated rather quickly with its twists, turns and revelations. The only catch is that we have to wait a whole week in between each new episode to see what comes next. So, while you sit tight in anticipation, we’ve curated a list of murder mystery comedies to keep you entertained as you twiddle your thumbs and wait impatiently.

Netflix’s Emmy-nominated tragicomedy Dead to Me explores the weirdly funny sides of grief, loss and forgiveness. Jen, a hotheaded widow in search of the hit-and-run driver who killed her husband, befriends Judy, a quirky optimist who isn’t quite what she seems. Ugly truths tumble out of their closets as it’s revealed that Judy may have a shocking secret that could destroy her life as she knows it.

With a star cast including Hollywood A-listers like Daniel Craig, Chris Evans, Christopher Plummer and Ana de Armas, Knives Out is a modern take on a whodunnit that follows detective Benoit Blanc as he investigates the death of the successful crime novelist Harlan Thrombey and unravels the tangled web of secrets of his eccentric family. Want more? Knives Out 2 is all set to make its premiere at the Toronto International Film Festival in September 2022.

3. The Woman In The House Across The Street From The Girl In The Window

A hilarious parody of suspense crime thrillers like The Woman in the Window and The Girl on the Train, The Woman In The House Across The Street From The Girl In The Window follows Anna (played by Kristen Bell) as she drowns her sorrows in glasses of wine and watches the world go by from her window. That is until she witnesses a gruesome murder that has her questioning her sanity.

With Adam Sandler and Jennifer Aniston reuniting on screen for a suspenseful comedy, you can be sure to expect a rollercoaster. Murder Mystery follows a New York cop and his hairdresser wife on their trip to Europe as a chance encounter leads them to be framed for murder aboard a billionaire’s yacht. 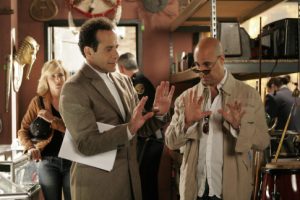 Starring two-time Emmy and Golden Globe-winner Tony Shalhoub, Monk is a mystery-comedy series about a former police detective Adrian Monk who develops an obsessive-compulsive disorder after the unsolved murder of his wife. The ‘defective detective’ also has many phobias, including heights, crowds, and even milk, but his razor-sharp deductive skills help him crack even the most baffling of cases.

A refreshing take on the classic sci-fi genre, Dirk Gently’s Holistic Detective Agency follows amateur sleuth Dirk and his reluctant assistant Todd as they make their way through supernatural mysteries. An odd chain of events leads to Todd becoming a person of interest in a murder and losing his job. That is when he meets Dirk Gently the detective who has been hired to investigate the crime and believes that they are destined to solve the mystery together. 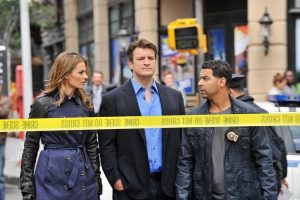 After a serial killer reenacts murders from his books, successful mystery novelist Richard Castle is sought out by Detective Beckett to help her solve the case. Realising that their unconventional partnership has its benefits, the pair continue to work together to investigate New York City’s most unusual homicides, all the while building a strong, if complicated, relationship with each other.

Leave it to Jason Bateman, Rachel McAdams and the talented cast of Game Night to have you laughing out loud with a sharp script loaded with dark comedy and plenty of unexpected turns and twists. The plot follows a group of friends whose game night takes a 180 when their murder mystery-themed party becomes all too real.