As fans of our favourite pop stars, we often put them on a pedestal, expecting them to fit the standards of beauty set by the society. But when they express themselves and celebrate their bodies in their own unique way, we, as fans and audiences are often quick to criticize it. After a tedious court battle on her Conservatorship row, Britney Spears’ father, Jamie Spears has finally agreed to step down from his role. The pop singer has finally spread her wings and posts more often than usual on her social media—the recent ones being risqué, topless photos of herself, with her hands covering her chest. However, to her surprise, fans who have been advocating #FreeBritney took a different stance and started making assumptions about her body. This begs the question—are we really letting her be free?

Her audience commented that Britney had a ‘boob job’ done and was pregnant. Before this could blow out of proportion, she quickly quelled rumours through another post and made it crystal clear that none of it was true. Sharing her thoughts on why she’s “exposing my skin”, she said, “In my opinion it’s quite twisted. The immediate response of when any woman is hot and they want to shed a layer…no…I’m not talking in a strip club or a performance…just on a practical scale of being in your car and realizing you’re wearing a stupid long sleeve shirt in the summer! The immediate reaction to any woman who does this after shedding a layer is DAMN I FEEL BETTER…therefore you think you look better!”

Further explaining where she was coming from, she added, “I bet you’re wondering why I’d expose my body NOW. Well, it’s because I was born into this world naked and I honestly feel like the weight of the world has been on my shoulders and it’s made me view myself that way! I wanted to see myself in a lighter way…naked…like the way I was born and to me looking back at my pictures when I shoot, it’s insane. The psychology in seeing myself in my purest form gives evidence that pain, hurt, tears, and heavy burdens aren’t who I am. I am a woman, a beautiful, sensitive woman who needs to look at myself in my purest form! No, I’m not going to do topless pics for the rest of my life ‘cause that would get boring but it sure as hell helps when you need to be enlightened.”

In another instance of singers getting called out for not fitting the narrative of conventional beauty, Lizzo recently faced vile, toxic comments from people on social media post the release of her new song, Rumors with Cardi B. The singer, who was deeply hurt by the reaction, went live on her Instagram and slammed the fatphobic, racist trolls, while in tears. “On the days when I should feel the happiest, it just… I feel so down. Sometimes I feel like the world just don’t love me back. It’s like it doesn’t matter how much positive energy you put into the world, you’re still gonna have people who have something mean to say about you.”

She also stated that it’s cool if you don’t like the song, but not liking the singer for the way she looks isn’t. “What I won’t accept is y’all doing this to Black women over and over and over again, especially us big Black girls. When we don’t fit into the box that you want to put us in, you just unleash hatred onto us. It’s not cool. I’m doing this for the big Black women in the future who just want to live their lives without being scrutinized or put into boxes,” she further added.

This July, Camila Cabello also became a victim of body shamming while taking a walk in the park wearing a top that exposed her belly. But the singer-songwriter addressed the haters through a TikTok video stating that being at war with your own body is so last season. “I am grateful for this body that lets me do what I need to do. We are real women with curves and cellulite and stretch marks and fat. And we gotta own that, baby,” she said.

Billie Eilish was also body-shamed last year when she was photographed in Los Angeles wearing a tank top and shorts, rather than her signature baggy clothing. Giving her haters a subtle response, the Bad Guy singer shared a short video from YouTuber Chizi Duru, who encourages fans to start normalising real bodies. 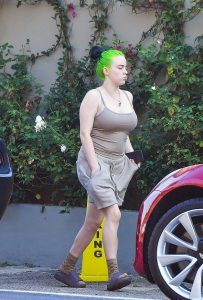 It’s 2022, and it’s high time we accept celebrities for being themselves. When they put the ‘real’ them out there, which ideally should be the norm, why isn’t it accepted? Here’s hoping we don’t only preach body positivity but also practice it!