Pantsuit. Before I am even over with pronouncing the term, it conjures up images of one political figure in my mind. Hilary Clinton. And it’s not one striking image in particular. It’s a good bunch of the American diplomat and lawyer rocking the pantsuit in a myriad of ebullient tones. From bright turquoise, blazing reds to cheery yellows, Clinton has relied on the silhouette religiously to call out sexism and patriarchy in politics and elsewhere. But what does a piece of clothing in a woman’s wardrobe have to do with deeply embedded societal issues? 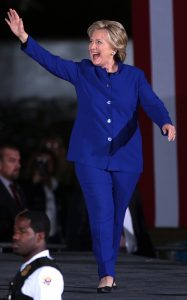 The contentious pantsuit originated back in the 1920s, when a small group of women in the USA adopted a masculine approach to their sartorial sensibilities. Think edgy hats and monocles paired with the conspicuous pantsuit. ‘Meant’ for the working men, the silhouette irked the male population (which I assume was the fear of losing power). The situation caused major controversies which even led to arresting women who wore pantsuits and restaurants shunning such women away in America. But the scenario couldn’t stop the ladies of the States from harbouring a piece in their closet which allowed them to move a little let alone do away with the sickening patriarchy. 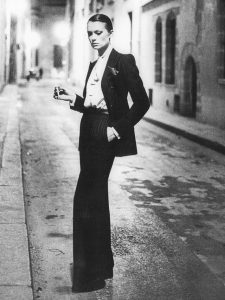 When Yves Saint Laurent introduced its iconic Le Smoking evening trouser suit in 1966, American women bagged the public support needed. The suit was ballsy, made-to-fit for the typical A-line silhouette and impactful. NYC’s remarkable socialite Nan Kempner was notoriously turned away from the Le Côte Basque in New York for wearing this YSL tuxedo. And that was the turning point in the inception of the pantsuit. From then on acclaimed names of Hollywood like Angelina Jolie to Cara Delevingne added the controversial garment on their sartorial roster. Made-to-fit the mainstream body type of the American women, big names in fashion jumped on the bandwagon to join the movement. From Armani, Ralph Lauren, Gautier to Alaia, women found a plethora of options to take their pick from. The inception of this manufacture was followed with brands like Elie Saab, Bottega Veneta and more reimaging the silhouette. For the Spring-Summer 2019 showcase, Elie Saab sent down the runway a scintillating, embellished and cinched at the waist pantsuit which set the holy grail for pantsuits. While the pantsuit has deep rooted history for American women, how did it become a major deal in India? Veering far from its fitting, women in India first started associating pantsuit as a weapon to stand for feminism. Adopting a silhouette that was never made to fit for the Indian body type, pantsuit in India transcended into the ‘powerful woman uniform’ or simply put, the armour of a girl boss. But the question is, can Indians really pull off a pantsuit? Opinions aside, Bollywood’s A-listers from Deepika Padukone, Katrina Kaif, Alia Bhatt to Sonam Kapoor, all have championed the silhouette. On the design front, London-based Indian menswear designer Kaushik Velendra created a fashion rage when he recently designed a custom-made pantsuit for Priyanka Chopra Jonas. Enhancing the actor’s shoulder, the quirky ‘super power suit’ has been the latest addition to bending gender norms in India. While the west has been a trend-setter for fashion of sorts in the country, the perception of pantsuit on an Indian body isn’t fitting for many. And in support of the latter, beyond the glitz and glam—how many Indian women on an average do we actually see acing a solid tone pantsuit? Does it really have to do something with the body type or is it that edgy, masculine element which Indian women are steering away from?