In Conversation With The Two Michelin-Star Chef Andrew Wong

When he’s not taking care of his restaurant, A. Wong in London, Andrew Wong shares his culinary craftsmanship with chefs at the Chinese speciality restaurant, Baoshuan at The Oberoi, New Delhi. A. Wong in London is the only Chinese restaurant in the world (except in Asia), to have been awarded two Michelin stars ever. So if you stay in the capital city and want to indulge in authentic Chinese cuisine (and its signature handcrafted dim sums) from a Michelin-starred mentor chef, Baoshuan is the place for you.

From keenly studying Chemistry and Anthropology to finally realising it’s the world of gastronomy he loves the most, Wong’s journey is proof that interests and inclinations can change and still lead to success. In a conversation with ELLE, Andrew Wong talks to us about Chinese cuisine, his signature dishes, and more.

ELLE: The moment you got your first Michelin star must have been a dream come true. And now you have two. How do you feel about it?

Andrew Wong: This is a landmark moment for us. The feeling of receiving a Michelin star is really as though you are being given something priceless and invaluable, and for you to have to take on the responsibility of keeping it safe and unfailingly protecting its prestige. The Michelin star identifies food and a restaurant that is worth a special journey. But there are other things too. It is a constant reminder of the accountability we have in creating world-class experiences for the guest and evolving it day after day to make it better.

ELLE: Growing up, did the culinary world excite you?

AW: I was born and brought up in London in a family of restaurateurs. I would occasionally help my parents in our restaurants but yet was excited about pursuing an academic career. During my childhood, it really was academics that excited me the most. I left school to study chemistry at Oxford University and later studied anthropology at the London School of Economics.

I returned home to help with the family business of four restaurants. After taking to the kitchen, I realised how much I loved being in the midst of flavours, food, and aroma – I found it almost magical! I travelled the breadth of China to study the cuisine even more closely and observed how the various regions in China had their own versions of Chinese cooking. I returned to London and opened A. Wong in 2012 with my wife Nathalie (the “A” in the name pays homage to my parents Alfred and Annie).

ELLE: What are your signature dishes?

AW: The steamed Shanghai chicken dumpling is injected with ginger-infused vinegar and offers a burst of flavours when one bites in, the Guangdong style prawns celebrates regional flavours from this province, the thinly sliced lamb made in Yunnan style or the Peking Duck, London 1960—all of them are signature recipes.

ELLE: What do you like about Indian food and culture?

AW: I love Indian food. I think it is delicious. In fact, there are several Indian restaurants in London. I am always fascinated by the use of native spices in Indian food. Every time I have visited India in the past, the team has taken me out to eat and explore new items. I have tried all the things that are famous internationally- Chicken Manchurian, Schezwan Chicken, Chicken 65!

There are a lot of similarities between eating culture in India and China, perhaps the reason why Chinese cuisine is so well-loved in India. For instance, the style of sitting around a table with friends and family to eat, ensuring that delicious food is a part of all important occasions, and the idea of celebrating delicious food with people you love! The other is about ensuring an assortment of different things while you dine to make certain that everyone is sampling a multitude of things- a variety of sweet, spicy, hot, cold, crunchy, glutinous. 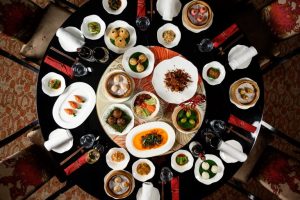 ELLE: With immunity-boosting food being of utmost importance now, which cuisine is beneficial for health?

AW: I must share with you that Chinese food is inherently light and healthy. Several Chinese cooking concepts and recipes recorded through research have shown they were medicinal, carrying various healing properties. The use of fermented pastes, pickles, salted and dried vegetables are not purely for flavour; these help in digestion as well. The combination of spices such as star anise, ginger, green onions and sesame carry abundant health benefits. The seasoning for the food too is kept minimal yet flavoursome.

ELLE: What are the must-try dishes at Baoshuan?

AW: The Dim sums at Baoshuan are truly a highlight. Each one is a beautifully and individually crafted masterpiece. While the Hedge Hog Bao is a visual marvel for children, the Duck and chilli puff, Grilled chicken Pot Sticker with egg and chilli, and the Thousand Layers Baked Black Pepper Chicken Roll are must-haves.

AW: I just want to focus on developing new experiences that will depict a better future that will move away from the past year and symbolise moving into a year of more love, happiness and hopefully more prosperity!