If you’ve watched the latest season of Masterchef Australia on Disney+ Hotstar, you’ll know how Justin Narayan started out in the competition. He was still trying to find his style of cooking. There were a few hits and a few misses but the Fijian-Indian chef’s moment came during the Barter Mystery Box Challenge when all he had to cook with were vegetables and no protein. Trusting his gut, Justin made Slow roast pumpkin with a sweet and sour grape glaze, charred leek purée with pickled and crispy broccoli. To his surprise, the dish wowed the judges, and the win helped him bring his A-game for every challenge thereafter, eventually leading to him being declared the winner of season 13!

Competing against Kishwar Chowdhury and Pete Campbell, Justin took home the Masterchef trophy and price money of $250,000 and the title of the second Indian-origin contestant to win the competition, his predecessor being Sashi Cheliah, who had won in 2018.

A youth pastor by profession, food always surrounded Justin while growing up. “It was closely related to everything I did, whether it was through meeting people, hosting people, or something my family did. It was always ingrained in me, and that’s where it all started.” From his audition round, featuring a chicken breast inspired by his mum’s chicken curry that earned him a position in the competition to his final winning dish, a replication of Chef Peter Gilmore’s squid dish for which he scored a 40/40, Justin has come a long way and this is just the beginning of his culinary journey.

Ahead, we talk to the pro about his big win, his learnings, future plans and more!

ELLE: Congratulations on your big win at Masterchef Australia! How does it feel?

Justin Narayan (JN): Thank you! It still feels very surreal and wild. It’s also a huge honour, but there’s also a lot of pressure to keep going and keep doing things with that platform and opportunity. 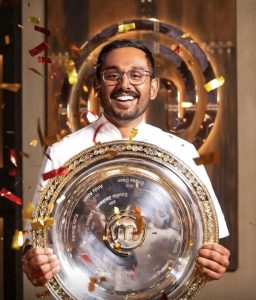 ELLE: How was the experience of taking part in this competition?

JN: It was so much fun! But also very stressful (laughs). You learn and grow a lot and make a lot of good friends along the way, so I really enjoyed it.

ELLE: What have been your learnings from Masterchef?

JN: You have to work very hard and keep studying. My food has evolved a lot since the start of the competition, but I also learned a lot about myself, what I like, how to stay confident and just back yourself a little bit. Plus, when you have good people around you, you’re able to do fun things.

ELLE: Ever since you aced the Barter Mystery Box Challenge, you’ve been on a roll! What prompted this sudden change and ambition?

JN: The ambition was always there to do something good and great. But it was frustrating not to have those results show on the plate. Once I was able to produce the dish that lived up to the expectations that I had, I gained the confidence to keep doing the same thing.

ELLE: We loved your sense of humour and your bond with your best friend, Pete. Tell us a bit more about your friendship with your fellow competitor who went to the finale with you. What was that experience like?

JN: Pete and I always joked about being in this scenario where we would have always loved being in the finale together, so for that to become a reality was great! We both were so happy and stoked about it. Most good mates just want to see their friends win and do well. Both of us wanted to see each other excel, and it was awesome to do that until the end.

ELLE: Have any cooking shows inspired you?

JN: We had access to a lot of TV Shows. Jamie Oliver’s was one of them. Netflix’s Chef’s Table was always very interesting and inspiring too. Every now and then, I would try a recipe or a different flavour combination that I would see, and it would work out pretty well. I kept doing that and landed in Masterchef somehow.

ELLE: Which was the most exciting and the most difficult challenge for you?

JN: Excitement and difficulty in the Masterchef kitchen go hand in hand (laughs). So for me, Martin Benn’s service challenge was it. The pressure of being in one of the best restaurants by one of the best chefs in Australia was extremely daunting. It was stressful but also exciting when the ball was rolling. It was a new kitchen, and we had access to insane produce. So I loved it!

ELLE: What are you going to miss the most from this experience?

JN: Being in that environment, you learn so much. You have access to the judges—Melissa Leong, Andy Allen, and Jock Zonfrillo. You can ask them questions and get their guidance on your dish, so I’m going to miss their feedback the most.

ELLE: What style of cuisine do you want to specialise in?

JN: Honestly, I have no idea. I’m not the kind of person who will specialise in one cuisine. For a week or two, I’ll probably stick to one and then switch to another. I don’t want to arrive at becoming the master of any cuisine. For now, I want to keep learning more about Indian food. I want to keep experimenting as I go along the way. I believe food needs to keep evolving and progressing, and I need to keep pushing myself.

ELLE: Now that Masterchef Australia is over, what’s next for you?

JN: I am going to start producing some videos and get into the food entertainment space. I wish to do something super fun that entertains people, connects with them, and, most of all, inspires them to cook. Currently, I’m working on the content for this and trying to get it out. I’ll see where things land and then hopefully open up a restaurant one day.