Aishwarya Sridhar spotted her first tiger at the age of 10 at Pench National Park, Madhya Pradesh. This sparked in her, a love for wildlife and started her off on a journey of exploring nature through the medium of photography and film. In 2020, 24-year-old Aishwarya became the first Indian woman to receive the 56th Wildlife Photographer of the Year award for a magnificent shot of fireflies. She also filmed the documentary, Tiger Queen Of Taru, which aired on National Geographic this year and traces the remarkable life of the 10-year-old wild Bengal tigress, Maya from the Tadoba-Andhari Tiger Reserve in Maharashtra. We speak to Aishwarya about her adventures.

ELLE: When did you first learn about Maya and what led you to tell her story?

Aishwarya Sridhar (AS): I was 15 when I first spotted Maya, who was a sub-adult and had three siblings back then. What drew me to her was that she has seen so many ups and downs in her short life, yet she has managed to rule the biggest territory in Tadoba. She controls five major water bodies, which is a difficult task for a tigress. When I first filmed her, it wasn’t with the intention of making a documentary. This, however, changed when she portrayed a human-like strategic behaviour in one instance when she brought back her former mate to kick out an intruding male, ultimately reuniting with her cubs. That incident pushed me to make a documentary on her and I wanted to be the one to tell that story. She loves to put herself on display and pose for the camera.

ELLE: Could you relate a thrilling jungle moment starring Maya?

AS: I was by a lake in Tadoba in 2015 with about forty vehicles by the lake. Maya and her three cubs were on the opposite side and an Indian gaur was sleeping close to our vehicles. Someone behind me exclaimed, ‘Maya, I hope you come and kill that gaur.’ Coincidentally, she stood up, approached the prey and in one leap, climbed on top of it, broke its hind legs and then gallantly invited her three cubs to kill it. This was the first time I had witnessed a kill and I was infinitely thrilled.

ELLE: Last month, you became the first Indian selected as an EmergingLeague member of the International League of ConservationPhotographers, US. How do wildlife filmmakers, such as yourself, contribute to animal conservation?

AS: The visual medium is strong and difficult to ignore. I hope my photographs and films evoke that passion, engage people and enable them to act, stand up and raise their voices against environmental injustice and create a sense of love for the environment. 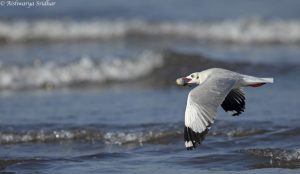 ELLE: What is keeping you busy at the moment?

AS: I am working on a wildlife series covering the endangered primates of India, starting from the South to the Northeast.