In the world of Instagrammable food where the presentation takes centre stage, what often gets neglected is the flip side of it, which is food waste and sustainability in the culinary industry. Did you know there’s so much waste created not just while cooking or what’s left on the plate but also during harvest? This means produce gets wasted before it even reaches us to cook and consume it. As per reported data, one-third of all food globally goes to waste, which is enough to feed 3 billion people! This appalling information only needs more attention because there are just a lot of potential products that are being dumped in the bin. Now that’s food for thought, isn’t it?

On the bright side, there has been little progress. Albeit we have a long way to go, some people have already given this issue thought and research. There are innovative thinkers sparking conversations that force us to change our perspective on how we look at the Indian food culture. Two Indian women, Anusha Murthy and Elizabeth Yorke are spearheading it via Edible Issues, a collective that focuses on fostering thought and conversations on the Indian food system. And their work recently gained global recognition after being enlisted in the World’s 50 Best Restaurants’ 50 Next Empowering Educators, among many other renowned global culinary experts (including Vinesh Johny from India). In view of this big achievement, I sat down with Anusha and Elizabeth to speak to them about their work, a sustainable food system and Elizabeth’s upcycling venture, Saving Grains.

While Anusha comes from an engineering and technology background, Elizabeth is a chef by profession. The Food Innovation Programme at Italy’s University of Modena was where the duo met. Edible Issues is their university project-turned full-fledged business. “One of our very first classes was about the future of food. We were grouped into teams and were asked to think about what are some signals that drive the way the future of food looks like in your own country. Elizabeth and I, being the only two Indians teamed up. We pored through over 200 newspaper reports, articles and journals to figure out the Indian food system. We thought it would be interesting for us to share whatever we’re learning, curate it, put it together, condense it, and actually send it out as a newsletter to our classmates and others to tell them what’s happening in India. This is how Edible Issues started. Our initial readers were our classmates and their parents, and then it slowly started spreading,” Anusha says as she talks about how Edible Issues came into being. 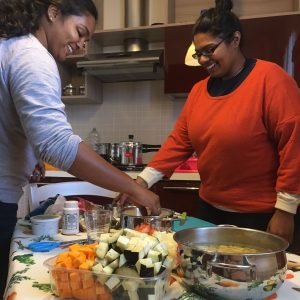 What began four years ago has now transformed into a knowledge-sharing platform where different people in the food industry come together to have various conversations. “We try to look at the food system as holistically as possible. So this involves both inter-industry conversation and conversations between the community and consumers,” Anusha shares. The topics aren’t only restricted to food waste though. There’s a lot of new information too. “We’ve spoken about how we have so many varieties of banana in India, our forgotten vegetables and what they look like, the seaweed industry in India. We also realised that people want to focus more on commodity-focused and budget-related topics because it was a good way for people to understand the entire value chain,” she adds. 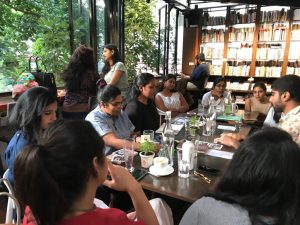 Moving forward, Edible Issues is striving to be more inclusive in terms of communication. “We’re still conversing in English, which already eliminates a lot of people. So we’re trying to find that inclusivity in our conversations and trying to bring more diversity with the topics we cover,” Anusha says.

It’s also about passing the mic and broadening the conversation in a male-dominated space. “We’ve seen a lot of food system conferences in India and it’s kind of dominated by the same sector. If I may say, old men in suits. So we’re trying to break away from that,” Elizabeth adds. 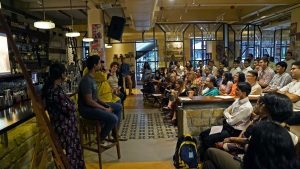 Where Does Our Indian Food System Stand Today?

After learning so much from industry experts and conducting research themselves, I wondered what their thoughts on our Indian food system are and where it stands today. Anusha says, “It is a very old system rooted in tradition and culture. But there’s a lot more to be learned because the lenses through which we look at it are still very western-oriented. One of our biggest pet peeves is how sustainability is very misunderstood in the Indian context. What is rewarded, or what is looked upon as sustainable, in some ways is the opposite of what is actually rooted in tradition. We need to understand our existing food system and find the vocabulary to talk about it in a better way.”

“A holistic approach is really important as we start questioning the future we want to see,” adds Elizabeth. “The sustainable conversation is something that we’ve been having a lot recently, mostly because we see the rise of plant-based foods. But what does that mean with a culture that already has a large variety of culinary knowledge in how to cook plants? And if we’re asking those questions as participants in this kind of diet, we are championing sustainability,” she says.

We’ve Talked The Talk; Now How Can We Walk The Walk?

Questioning what you eat is important. But the hard facts beg the question–what can we practically implement to make the food system sustainable for future generations? Elizabeth believes there’s no one answer. “There’s a lot of romanticism in the tradition. We need to find that balance of really understanding what is good and not good and acknowledge both aspects of our food culture, but at the same time how you move forward with better approaches can vary. Every community has a different methodology toward sustainability that could still make sense. There’s no one shoe fits all kind of approach, which is being advocated,” she shares.

“A lot of it also is in resilience, and the way we are tolerant to each others’ practices,” Anusha adds. “So if there is a space of such inequality and disparity, then what happens really to sustainability is also a question that I think we need to think about because it’s not just about economic or environmental sustainability, but it’s also about human sustainability, which a lot of narratives really ignore,” she shares. So the grand vision for any sustainable system? If everyone is respectful of each other’s culture and can live in a socially, economically just and environmentally sustainable food system.

Being in the hospitality industry, Elizabeth has been working towards finding ways to upcycle food. She also works with the Pledge On Food Waste, an organisation that helps restaurants and hotels with processes to minimise their food waste and food costs. Taking upcycling to a new level, her venture Saving Grains upcycles spent grain from breweries.

Explaining how she came to this eureka moment, she says, “I went through a bit of a bread phase. My curiosity landed me an internship with a bread historian who was looking at 12 to 16th-century American and European bread. And during that time, we were basically reading about those kinds of bread. We came across a text that said that brewers and bakers worked in the same space because they share common ingredients–grain, yeast and water. But what caught our attention was that whatever was left over from the processes was used by the other. So the baker had extra bread, they would give it to the brewer and the brewer would basically make beer from that bread. And the brewer would give the baker leftover grain and leftover yeast to bulk up the bread because grains were an expensive commodity back then, and so was making flour. When I came back to Bengaluru, I saw the rise of micro-breweries. There are about 80 today, and a lot of them produce spent grain. The grain is soaked in hot water in the brewing process. When it’s in water, the carbs come out into the water and you’re left with very high fibre, high protein grain. Then I pick this up, dry it out, convert it into flour, and that’s how we save grains.”

Spent grain has so much flavour and nutrition, which is what caught Elizabeth’s eye in the first place. Currently, she is using this grain to make chapatis, flour, biscuits and granola. “We also work with brewers, bakers and home chefs across the city to see how they can use the supply and the processes. Some are making flour from spent grain and some are even making bread, brownies and treats for pets!,” she adds.

For Elizabeth, it isn’t about making just another cool product. She reiterates the idea is to create something that can nurture and nourish communities, and upcycling food is a tool to do that. “We’ve set up an upcycling kitchen called Kutumba at a Bengaluru-based community centre. We work very closely with Geist brewing. The women there make chapati from our flour and now they’ve started selling the chapatis. This supports their initiatives at the community centre. And also consume the flour themselves. So the idea is to find more pathways in which we can not just make something with all the right hashtags but to really look and see how we can build a new business model in food. It’s about making a closed-loop food system,” she concludes.