Yeah Netflix and Prime is cool, but have you tried 2010s era Disney channel yet? Warning: Content may cause a crippling addiction and lowered interest in new shows that just don’t hit the spot anymore. The intros may evoke considerable nostalgia leading to a drop of tear or two. But the rewarding factor is lucrative. Heightened emotions all thanks to dopamine bursts and all the mushy feels. So, drop what you’re doing and give it a watch. You can thank me later.

Best show EVER. Having grown up on copious amounts of televised repeats of this gem of a show, I desperately prayed for my 18th birthday to transform me into a magical woman adept at casting spells and fighting evil. Seeing Farida Jalal’s top tier acting coupled with Pam’s sass and Dhruv’s charm, the only word I need to describe this show would be ‘wholesome’. Needless to say, Harry Potter got nothing on Jiya. Truly nostalgic.

if you didn’t watch “kya mast hai life” everyday on disney channel as a kid then you really missed out on something very special🌹✨ pic.twitter.com/I2hYIAZVXd

I had a full blown experience of college life, at the mere age of 9, by vicariously living through this show. Every character, from Rags to Ritu, Zee to Zenia, and the ever charming crush of the nation Mr. Vir, portrayed by Shaheer Sheikh, had us all in a chokehold.

First things first, Sarabhai Vs Sarabhai is making a comeback. Thrilled is an understatement. Where would modern civilization be if this show hadn’t been developed? Probably still rubbing stones together. Roshesh’s poetry still puts 21st century modern poets to shame. Brb, contemplating getting a tattoo that says ‘’Monisha darling, that’s too middle class.’’

Considered an Indian spin to the hit American series Good Luck Charlie, ‘Best Of Luck Nikki’ traced the journey of the Singh family, focusing on the video diary of the oldest daughter, Dolly Singh. Seen carrying the video camera in every single frame, she aimed to build a survival kit of sorts via the video footage for her baby sister Nikki, so as to make her teenage years relatively easier. The feel good factor of the show made it all the more endearing and that’s probably why I keep revisiting it on days I feel blue.

5. The Suite Life of Karan & Kabir 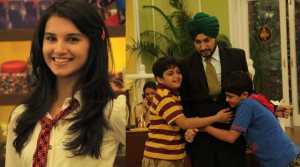 Tara Sutaria’s claim to fame was spearheaded by our very own rendition of The Suite Life Of Zack & Cody where she essayed the role of the Vinnie, charged with the task of babysitting the mischievous twins Karan & Kabir. Heralded as one of the most iconic Disney shows, this one’s worthy of several rewatches.