A trailblazer who shunned normalcy and rules, fashion’s enfant terrible Jean Paul Gaultier is a man of many firsts. He is credited with turning a controversial pop star, Madonna, into a full-fledged icon overnight, courtesy of the legendary cone bra. The first fashion designer to sit on the jury at the Cannes Film Festival (2012), Jean-Paul was also one of the few designers to dress men in skirts and send them down the runway to provoke onlookers. A true fashion visionary and no stranger to scandal himself, Gaultier is among the disruptors of the fashion world who effectively infused his flair and flamboyance into a fragrance line. He etched his name in fragrance history early on with his 1993 launch ‘Classique’, which comes in the now iconic bottle shaped like a woman’s torso — corset-clad, risqué and glorious.

It’s no wonder that the brand’s 2017 launch ‘Scandal’ reached instant classic status. Featuring high-kicking legs atop its bottle, the fragrance is in line with Gaultier’s celebration of the female form. Representing an overdose of pleasure, the fragrance conveys the duality of the modern woman. At work, she’s a rock that never budges from her resolve, and while out and about, she demands attention with her playful demeanor. The scent is intoxicatingly syrupy and sweet lending itself to a seamless day-to-night transition. Gardenia shining through diffused honey and punctuated with darkly sparkling blood orange complete the notes. The fragrance lasts all night and you’ll notice the patchouli coming through and transmuting into an animalistic scent that is sexy, potent, loud, and never shy. Every bottle of ‘Scandal’ is a collector’s delight, whether it matches their own legs or not! 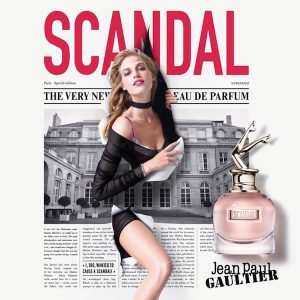 – The scent is created by Perfumer Daphné Bugey (in partnership with Fabrice Pellegrin and Christophe
Raynaud), who has also lent her ‘nose’ to Issey Miyake, Dsquared2, Le Labo, and Valentino fragrances.

– The advertising campaign for ‘Scandal’ left the fragrance industry divided. Featuring model Vanessa Axente playing the character of a politician living a double life, the jury’s still out on the advert. The controversy is in itself is entirely on-brand with Gaultier’s reputation.

– Since its launch, Scandal has seen multiple versions—Scandal By Night, Scandal à Paris, So Scandal! and Scandal Le Parfum coming in as the latest version in 2022