Catching Up With Meera Syal, The Woman Who Wants To Return Her Husband In Roar

The first frame of Roar, the TV series on Apple TV+ has Nicole Kidman eating a photograph. You know at that moment that either she was really hungry or she has a penchant for picture eating- both of which explain nothing. But that’s the thing about Roar, there’s nothing usual about it. This is an anthology and it is streaming on Apple TV+. A quick glance through the trailer will tell you that you are in for a treat if you enjoy content that’s sharp as a tack, witty and has women being absolute badasses! Oh and it’s also dark and based on a book by Cecilia Ahern.

We caught up with Meera Syal, the British comedian and actor who stars in the anthology and plays the woman who wants to return her husband. Now now ladies, I know many of us want to do that, so read the interview and she might just have tips.

ELLE: When you were approached for the role, which is so interesting and different.. what were your first thoughts?

Meera Syal: My first thoughts were, “Wow, what an amazing script! How rare is it for a South Asian woman of my age to be offered a part like this, which is so funny and deep and complex and says a lot of things we think of but never get to say, and have this incredible range of emotions in it.”  So it was an absolute gift of a role and I feel really lucky that I got to play it.

ELLE:  We’re starting to see a lot of South Asian references and it’s going beyond being inclusive on paper- it means that roles are exclusively being written. Do you also notice that or do you think it’s a one-off thing perhaps?

Meera Syal: Well, it is certainly a lot better than when I started. You know when I started, it was just playing a role for fixing of arranged marriages and then later on, terrorists. You now have stuff like Bridgerton which has blind casting but also you have very specific roles written like this one, which throws away a lot of the cliché’s and actually is a full rounded, complex , flawed people who we are. Actresses in India don’t get this arc. We are always seen as ‘other’ as we’re based abroad and I really hope this is one of many roles that start dismantling all of those old stereotypes. I have to say its because we’ve got the writers now, the directors and an all female team. I think when you have female creators and female women of colour and women of different minorities in those divisions of power, you’re going to get those stories because they have the influence and the power to get this made. 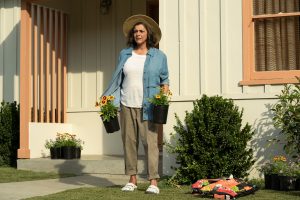 ELLE: In real life, how likely are you to be interested in a scheme that allows you to return your husband?

Meera Syal: You should never ask a women that! You never know what answer you’re going to get. I guess you can say that I’ve already done that once you know because I am on my second marriage so I know what that feels like. But no.. I don’t want to throw away my husband no 2.

ELLE: Are you seeing any roles for older women being better written with a lot more depth and a lot of sensitivity?

Meera Syal: I think it’s getting better but we still have a way to go. There’s this weird thing- when you’re 30, you’re playing the wife of actors and suddenly you’re in your 50s and now you’re playing their mothers and you think hang on a minute- what happened?? Actors just have dog years or something. There’s just something really weird going on how older women are seen on screen. Why do people think that a women that is 50+ doesn’t have a vibrant inner and outer life. In fact, I think that irony is we are much more interesting as we get older- we’re full of experience- we don’t take rubbish from people anymore. We know who we are and actually the roles we could play now are magnificent but nobody wants to write for older women. So that’s something that I hope will change and I think it will change because more older women now have that power because they want to see their own stories reflected. 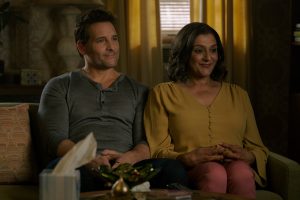 ELLE: There’s always this debate that the book is better than the tv series or the movie. What is your take on that?

Meera Syal: I think this is one of the rare occasions that a brilliant book is becoming into a brilliant series and I’ll tell you why. It’s because it’s an anthology- it’s really hard sometimes to make a full deep, complex novel into a great screenplay- because so much of the novel is internalised. But I think the brilliance of the show’s writing is that it is all self contained and that translates so brilliantly into a one-off tv series. It’s actually a perfect fit- a brilliant book to adapt and there are many more stories actually in the anthology should they want to do this again.