11 New Shows & Films To Watch On OTT Platforms This January

The new year brings with it a host of new shows and films to binge watch while you cosy up in your blanket on those cold winter days of January. From crime action docuseries to mystery thrillers and more, here are all the new releases on OTT platforms in the first half of the month.

For the first time ever, Netflix introduces a series that allows you to choose the order of watching the first seven episodes ahead of its final instalment. Starring Giancarlo Esposito of Breaking Bad fame, Kaleidoscope’s plot revolves around a criminal mastermind and his crew who attempt an epic and elaborate heist worth $7 billion dollars. However, betrayal, greed and other threats undermine their plans.

The coming of age, drama, mystery series centres around the mother-daughter relationship between Georgie and Ginny as they finally stop moving around and settle in a small town in Massachusetts. The first season shows how Ginny goes through her own set of challenges as a teenager while also dealing with her mother’s secretive past. Towards the end of season, Ginny learns about a crime committed by her mother and runs away from home. In the second season, new relationships and challenges await Georgia and Ginny as they navigate life in Wellsbury.

Streaming on Netflix on January 5

Based on the 1997 Uphaar Cinema fire incident and the aftermath for the families and victims, Trial By Fire is a series that tells the story of two grief-stricken parents who navigate the loss of their kids and a dogged fight for justice.

Imagine going for a tasting to a renowned chef’s fine dining restaurant only to find out that the menu planned for the guests has some murderous connection. Sounds super freaky, right? But that’s kinda how The Menu’s plot is. The official synopsis reads, “A couple, Margot (Anya Taylor-Joy) and Tyler (Nicholas Hoult), travel to a coastal island in the Pacific Northwest to eat at an exclusive restaurant, Hawthorn, where the reclusive, globally celebrated Chef Julian Slowik (Ralph Fiennes) has prepared a lavish tasting menu for select special guests. Joining the couple are three young, already inebriated tech bros, Bryce (Rob Yang), Soren (Arturo Castro) and Dave (Mark St. Cyr), an older wealthy couple and repeat clients, Anne and Richard (Judith Light and Reed Birney), renowned restaurant critic Lillian Bloom (Janet McTeer) and her slavish magazine editor Ted (Paul Adelstein), and a famous middle-aged movie star (John Leguizamo) with his assistant Felicity (Aimee Carrero). Hosted by the immaculately dressed front of house staff led by general Elsa (Hong Chau), the evening unfolds with increasing tension at each of the guest tables as secrets are revealed and unexpected courses are served. With wild and violent events occurring, Slowik’s motivation begins to rattle the diners as it becomes increasingly apparent that his elaborate menu is designed to catalyse to a shocking finale.”

Streaming on Disney+ Hotstar on January 4

Based on the Australian reality TV show, Masterchef India is back with its seventh season after a two-year gap. Watch some of India’s home cooks compete as they showcase their skills to win the title of Masterchef India 2022 along with a grand prize money. This season, Chefs Ranveer Brar, Garima Arora and Vikas Khanna come on board as judges to test the amateur cooks.

6. Mumbai Mafia: Police vs The Underworld 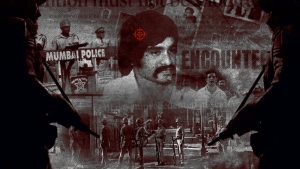 In 1990s Mumbai, a crime boss and his network wield unchecked power over the city — until the rise of “encounter cops,” who brazenly kill their targets.

Streaming on Netflix on January 6

No words can describe the love and affection humans hold for their pooches and vice versa. And if anything happens to them, pet owners drop everything immediately to come to their rescue. Based on a true story, Dog Gone is a tale of a young man and his dog AKA his best friend. When Fielding Marshall’s (Johnny Berchtold) beloved dog goes missing, he embarks on an incredible search with his father John (Rob Lowe) to find him and give him life-saving medication.

The alternate history drama series is finally coming back with its second but final season after three years. Set in 1970s America, Hunters follows the story of a Holocaust survivor Meyer Offerman (plated by Al Pacino) who finds and leads a team of hunters to hunt down and eliminate Nazis hiding in NYC. Hunters Season 2 will see the group on a mission to find and kill Adolf Hitler who is supposedly hiding in South America and secretly plotting a Fourth Reich with his wife aka the colonel Eva Braun.

Streaming on Prime Video on January 13

9. MADOFF: The Monster Of Wall Street

This docuseries follows the rise and fall of financier Bernie Madoff, who orchestrated one of the biggest ponzi schemes in Wall Street history.

Streaming on Netflix on January 4

As per the official synopsis, “Months have passed since the events on Kamino, and the Bad Batch continues their journey navigating the Empire after the fall of the Republic. They will cross paths with friends and foes, both new and familiar, as they take on a variety of thrilling mercenary missions that will take them to unexpected and dangerous new places.”

Streaming on Disney+ Hotstar on January 4

ICYMI in theatres, Phone Bhoot starring Katrina Kaif, Siddhant Chaturvedi and Ishaan Khattar. A ghost reaches out to two bumbling ghostbusters for a business idea. However, their plans go downhill as the eerie ghost reveals her plan.