On the sets of Kangana Ranaut-starrer Manikarnika

Here are all the locations where Kangana Ranaut’s Manikarnika was shot:

Amer Fort, also known as Amer Palace, is a big tourist attraction in Jaipur. Built by Raja Alan Singh, a ruler from the Chanda clan of Meenas in 967 CE and later ruled by Raja Man Singh, the palace is spread over four levels, each with a courtyard. Other than rooms, the traditional Diwan-i-Aam, or “Hall of Public Audience”, and the Diwan-i-Khas, or “Hall of Private Audience”, it also houses the Sheesh Mahal (The Mirror Palace) and the Sukh Niwas (a tad cooler than the rest of the palace, owing to the winds blowing over a water cascade). The palace is sculpted out of red sandstone and marble, and served as the residence of the Rajput Maharajas and their families. 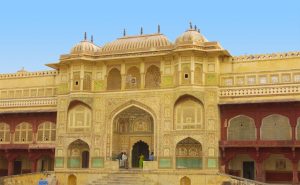 Nahargarh Fort – Overlooking the pink city, Nahargarh Fort stands on the edge of the Aravalli Hills. Along with Amer and Jaigarh Fort, Nahargarh too served as a defensive line for the city. The fort was originally named ‘Sudarshangarh’ but it became known as Nahargarh, meaning ‘abode of tigers’. Built by Maharaja Sawai Jai Singh, the king of Jaipur in 1734, the fort was constructed as a place of retreat on the summit of the ridge above the city. Walls extend over the surrounding hills, forming fortifications that connected this fort to Jaigarh. Jaigarh Fort – Situated on the headland called the Cheel ka Teela or Hill of Eagles of the Aravalli range, Jaigarh Fort overlooks the Amer Fort and the Maota Lake. India. Built by Jai Singh II in 1726, this fort was built to protect the Amer Fort. The fort is rugged and has similar structural design like the Amer Fort. It is also known as the Victory Fort. Stretching over 3 kilometres along the north–south direction and a width of 1 kilometre, the fort features “Jaivana”, the world’s largest cannon on wheels. The palace complex houses Laxmi Vilas, Lalit Mandir, Vilas Mandir, Aram Mandir, an armoury and a museum. Jaigarh and Amer Fort are connected by subterranean passages and are considered as one complex. Bikaner – Bikaner was established by Rao Bika in 1488. Though it was in the Thar Desert, Bikaner was considered an oasis on the trade route between Central Asia and the Gujarat coast as it had adequate spring water. Rao Bika built a fort in 1478, which is now in ruins. Around a century after, the state’s fortunes flourished under  Rai Singhji, who ruled from 1571 to 1611 and he built the Chintamani Durg or the Junagarh Fort. Bikaner, one of the ore prominent cities in Rajasthan also boasts of the Lalgarh Palace which has now been renovated as a heritage hotel, the Badal Mahal, Karni Mata Temple, Mukam Bishnoi Temple, Laxminath Temple, Bhandasar Jain Temple. The city is famed for its savoury snack Bikaneri bhujia, sold all scross the globe. Other specialities include bajre ki roti, dal baati churma, ghevar, halvas, and papadums. 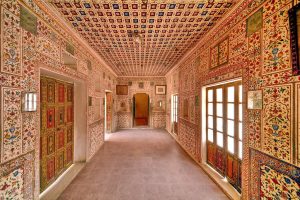 Mehrangarh Fort – Rao Jodha, who is also the founder of Jodhpur, built the fort in 1459. The fort is situated 410 feet above the city and is enclosed by imposing thick walls. Inside the boundaries, lie several palaces known for their intricate carvings and expansive courtyards. The fort has seven gates which include Jayapol (meaning ‘victory’), built by Maharaja Man Singh to commemorate his victories over Jaipur and Bikaner armies. Though the fortress was originally started in 1459 by Rao Jodha, founder of Jodhpur, most of the fort which stands today dates from the period of Jaswant Singh of Marwar (1638–78). Located at the centre of the city, the fort spreads over 5 kilometres on top of a high hill. The walls are up to 118ft high and 69 ft wide and protect some of the most beautiful and historic palaces in Rajasthan. Within the fort are several brilliantly crafted and decorated palaces that Moti Mahal, Phool Mahal, Sheesha Mahal, Sileh Khana and Daulat Khana.