Getting lost in the compelling narrative of cinema is my favourite way to escape the real world. Watching a movie with me, however, is far from escapism for my company. You see, I’m one of those who can’t stop talking, picking apart every scene and theorising about the ending. In my defence, how can I not scream at the screen when they let Jack die in Titanic when there was clearly enough space on the door to fit them both? It is during instances like these that my friends not so politely remind me that THAT’S NOT HOW BUOYANCY WORKS. Okay, okay I’ll let that one go. While some plot holes and inconsistencies are forgivable, sometimes certain moments in popular movies and TV shows make us sit up in our chairs and go “wait a minute!”. Here are 7 such errors and plot holes that you will not be able to unsee:

The Duffer Brothers admit they forgot about Will’s birthday in #StrangerThings:

“The honest response is, clearly like the characters in the show, we also forgot about Will’s birthday. So the debate now is whether we adjust Will’s birthday or we just let it be really sad.” pic.twitter.com/ADUW0vbhUu

In Season 2 of Stranger Things, Joyce tries to bring Will out of the clutches of the Mind Flayer by telling him stories about some of his happiest memories. It is then revealed that his birthday is March 22. Cut to Season 4, when Mike and Will witness El being bullied by her classmates. In the video footage that one of the bullies is taking of El’s breakdown, the date reads March 22, 1986. Fans were quick to come to the conclusion that Will’s sour mood wasn’t because of being the third wheel on Mike and El’s date, it was because everybody forgot his birthday, including his mom. Turns out that it wasn’t the characters on the show that made the error, it was the creators who forgot the date they had put down for Will’s big day. The Duffer Brothers admitted that it was a continuity error. 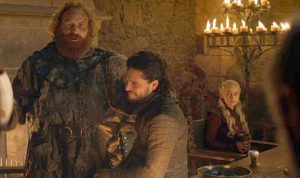 The banquet scene from the Game Of Thrones Season 8, Episode 4 featured an unexpected prop— a disposable coffee cup! While it was later edited out, HBO wittily tweeted that “The latte that appeared in the episode was a mistake. Daenerys had ordered a herbal tea.” 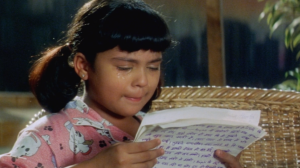 Tina gave her daughter eight letters for her each birthday. When Anjali reads her 8th letter she is 8 years old which means she’s been reading since she was one year old? Now that’s a story The Neelam Show should cover. 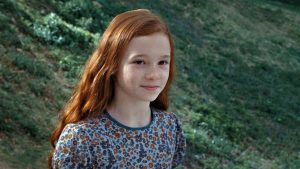 Pretty much any time someone met Harry Potter who also knew his mom, told him that he had his mother’s eyes. This is true in J.K. Rowling’s novels, where both Harry and Lily have green eyes. However, in the movies, that’s not the case. Actor Daniel Radcliffe had an allergic reaction to green contacts, so he kept his blue eye colour and in the Harry Potter and the Deathly Hallows – Part 2 flashback we get to see Lily in her childhood who very evidently has neither blue nor green eyes. Also, on an unrelated note, why couldn’t Voldemort just fling baby Harry out the window to kill him instead of using magic that didn’t work? 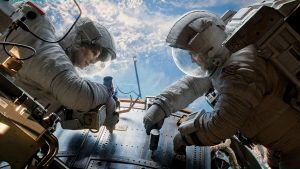 George Clooney’s Lieutenant Kowalski sacrifices himself to give Bullock’s character a greater chance of survival in Gravity. The pair find themselves clinging onto two ends of Kowalski’s security rope when he disconnects and drifts off into space. However, due to the laws of physics in zero gravity, all Bullock had to do was tug the rope and he would have drifted safely towards her and the satellite.

my favorite thing about the Mamma Mia movies is how the sequel brings Cher back to life pic.twitter.com/dlxMILuUX2

Just after performing at Sophie’s Bachelorette party in the first film, Donna says “someone up there has got it in for me, I bet it’s my mother…” implying that her mother is dead. Guess who shows up in the second part? Cher, Donna’s very-much-alive-mother. Are we missing something? Does she have three moms?

Lee takes his son Marcus to a river and an adjacent waterfall in the first film and explains they can talk freely because the sound of the water masks any noise they make, thus allowing them to evade the monsters. So, my question is, why do they not live by the waterfall? At least during Emily Blunt’s due date. Which also brings me to another question— in a world inhabited by creatures that kill you if you make a sound, why did they think that having a crying baby would be a good idea?

If you liked this article about plot holes, you might also like 10 Horror Comedies You Should Watch If You’re A Fan Of The Bhool Bhulaiyaa Series