Twenty-four-year-old rapper Meba Ofilia burst onto the music scene after snapping up Best Indian Act at the 2018 MTV European Music Awards a few months ago, for her track ‘Done talking’ featuring MC Big Ri of Khasi Bloodz. Here, the Shillong-based musician tells us more about her journey, how her roots influence her music, and what’s next:

ELLE: Tell us something we don’t already know about you.

Meba Ofilia: I have a bachelor’s degree in English literature, and right now I’m pursuing law. I also suffer from stage fright, which is something I really struggled with and fought to get as comfortable as I am today. It was only after I met Lamonte Pakyntein [in 2014], a former member of Khasi Bloodz (and also the producer of ‘Done Talking’) that I knew I had to do something with what I have—I knew I could sing, but I never thought I’d make it to where I am right now.

ELLE: Tell us about ‘Done talking’—how did the collaboration with MC Big Ri come about?

MO: ‘Done talking’ was fun. I loved every moment of it. One day, Big Ri came up to me and said, “chol leh jingrwai kawei”, which means “let’s do a song together” and I said yes. We never even had a video in mind! But I’m glad and grateful that it happened.

ELLE: Has life changed after your big win?

MO: There hasn’t been too much change, except that the demand for my music has increased. Sometimes, it becomes difficult to match up to the expectations of the audience, but I’m taking my time to put out new music.

ELLE: Has music always been a part of your life?

MO: My brother taught me how to play the guitar when I was 15. From there, there was no turning back. And music is in my blood, too: my grandfather is a renowned folk singer-songwriter, my aunt is an Indian classical musician, and my uncle, Nicholas Dann, is a well-known folk singer-songwriter in Shillong. I draw a lot from them.

MO: I like music that is honest about love, hate, or struggle. I’m currently bumping to artists like Internet and J Cole. But it also depends on my mood, so sometimes I go way back to Salt-N Pepa, SWV, and Da Brat. H.E.R’s I Used To Know Her would be my favourite currently. There’s also this pop duo called Oh Wonder that I cannot stop listening to.

ELLE: And who would you say has influenced your work the most?

MO: Alicia Keys, with her raw vocals. Beyoncé, whose effortless stage performance and personality is out of this world. Lauryn Hill’s versatility and honesty with respect to her craft is close to perfect. Her The Miseducation Of Lauryn Hill spoke truth to me as few others could. 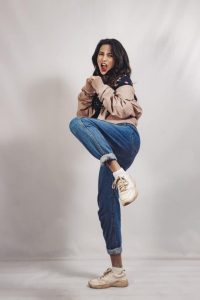 ELLE: What are you working on next?

MO: Everything is happening so fast—interviews, shows, shoots…and after a long day, I come back home and it’s only when I finally decide to sleep that ideas come to mind. There are a lot of things to write about. But like I said, I’m taking my time to refine my rhymes.

ELLE: In the next five years you want to…

MO: See myself as the woman that I aspire to be right now. I want to be so many things that sometimes I tend to get lost. But being with the right people brings me back to square one, and I’m grateful that they are such positive influences in my life. 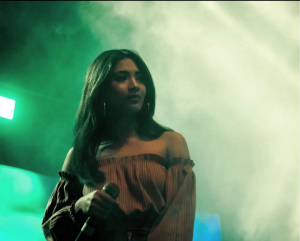