There are some actors that light up the whole screen, leave such a great impact on you that you’re thinking about them long after you’ve left the cinema. Shefali Shah is one such actress. With Delhi Crime’s Season 2 out on Netflix, we caught up with Shefali Shah to talk about the show, what’s changed and what has stayed the same and the character arc of Vartika.

ELLE: Since Season 1 was such an applauded show across the globe while prepping for season 2 was there pressure in terms of the cases it focused on and the storyline?

Shefali Shah: It was great that Delhi Crime got so much acclaim and so much love, internationally as well, and then there was the Emmy, but when we made Delhi Crime it wasn’t made with the intention that it would be showcased at the Sundance or that it would win an Emmy or stream on Netflix. Everything happened after the show got made, it was made with a lot of passion, conviction, love and hard work of all the members of the cast and crew. The same goes for Delhi Crime Season 2. As an actor, because Vartika became larger than life in season 1 which was unexpected for me, getting into her shoes was scary, it was daunting but very exciting because she is my favourite character, and I’m very possessive of her. Delhi Crime is my favourite piece of work. We have to understand that season 1 and season 2 have very different stories and creators. I think everyone in Delhi Crime Season 2 has done a fantastic job and has put together a show we are very very proud of. We should take away from the shadow of Delhi Crime season 1 and watch season 2 as an individual show, in its entirety. There is a lot of growth, evolution and complexity added to the characters, season 1 was about a crime and how they introduced these characters into it, season 2 is about the characters and how they have evolved and the kind of situations they are put in, following a crime. So, it’s unfair to compare both of them. All I can say is that we are very proud of what we created and we can’t wait for audiences to watch the new season. 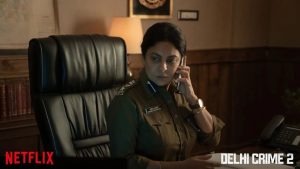 ELLE: You played the DCP in Delhi Crime season 1 who solved such a gruesome crime and of course, in season 2 you will be handling a lot of sensitive cases. How does that impact your mental health?

SS: Luckily Vartika is somebody who is very close to you, her ideologies, her thought process, the way she is as a person, and what she is is what you see. There is no pretence here which is similar to who I am as a person. In the first season, she felt the pain and anger, there was a single-minded focus on getting these killers. In season 2 there is a dilemma, there is a question mark in everything she is doing, it is more internal. She sees the evidence, she knows the right procedure but there is always the question of ‘am I going in the right direction?’ She falters, she has flaws and she corrects them, even if it’s at the cost of herself – there is a great evolution in the characters. When you are doing such an intense show like Delhi Crime, it is likely to play on your mind somewhere. But when I’m doing a show I do not want to think about anything else, it’s not like when I come home from the set I scream and shout and continue the same behaviour of the character I play on the show. At the same time, it’s not something that leaves me and I do not want it to leave me. I am obsessed with it. I go to work, come back, shower, dive back into the script, wake up the next morning and go back to work. I live in that zone. 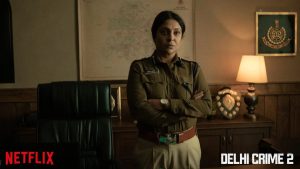 ELLE: As an actor, over the years you have played so many powerful characters, and now we are seeing you at the centre of these projects, being at the helm of them. How does it feel at this point of your career doing these wonderful roles and getting to do it your way?

SS: Amazing!! I’m so glad Delhi Crime changed it for me. Where people said ‘okay she can lead’ it’s not just about leads or parallel leads but it was about putting me right in the forefront. This talks a lot about the requirement of actors as well, earlier, there was a requirement of only ‘stars’ which has now changed. This is great not only for me but for all actors. I’m so glad this has happened, I am finally doing the work that I want to do. 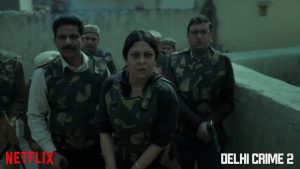 ELLE:Do you think times are finally changing for female characters? As well as in terms of ageism in the industry. Does it not matter anymore? Are we finally there? or are we at the cusp of it?

SS: We are more than at the cusp of it, why should we finally be there? it’s a work in progress, it should only grow from here. In the 60 and 70’s there have been women playing lead roles whether you talk about films like Aradhana or Khayyam. However, there was a phase in the 80 and 90s, where women were only accessories in a film, but then it started to change again whether you talk about Shakuntala Devi or Badhaai Ho amongst many other films, where the centre roles were played by a woman that weren’t restricted to the shelf life of 18 to 22. This has a lot to do with the characters that are being written down for women as there is a confidence and understanding that audiences want to see them in the limelight.