In Conversation With Lavina Baldota: Textile Revivalist And The Curator Of Sutr Santati

When Gaurav Gupta outfitted Cardi B in his piece, we watched intently, a little frisson of excitement at spotting an Indian designer go global. If I had to pin it down to an emotion, I think it would be pride. And we have every reason to be proud. Indian handlooms have, for far too long now, drawn the short stick. Our craftsmanship is at par with the best in the world, no wait, scratch that, better than what the world has to offer and yet, we hardly see chatter around it- the kind of buzz that a designer manages to garner. The role that people like Lavina Baldota becomes important and cataclysmic in moving the conversation about Indian handlooms forward. Lavina Baldota is the Head of Corporate Social Responsibility at the Abheraj Baldota Foundation. Sutr Santati is an exhibition celebrating 75 years of India’s birth as an independent nation, by bringing together diverse textile traditions of the country, conceived and created by some of its most prominent artisans, craftspeople, designers and artists.

ELLE chatted with Lavina Baldota about Sutr Santati, the idea behind it and the stories behind the pieces showcased. 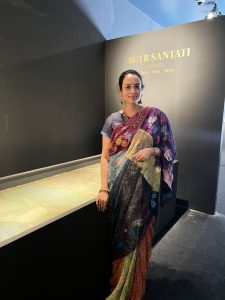 ELLE: With such vast ground to cover and so much to showcase, how did you pick the 100 pieces you wanted to go with?

Lavina Baldota: The 100 exhibits represent the different textile traditions, created by processes of hand weaving, embroidery, resist-dyeing, printing, painting and appliqué, among others. As a curator ,I tried to represent several indigenous yarns, techniques and craftsmanship practiced in various clusters pan India. The exhibit has some revival pieces, some contemporary textile art, some interfaces of different processes, but each piece shows excellence.

ELLE: In a generation invested in fast fashion, how are you hoping to make traditional weaves more accessible and more appreciated?

LB: I feel awareness is the key. Only if gen next understands the effort and knowledge that goes into the handcrafted, can they appreciate and aspire for them. Sutr Santati by use of natural yarns and eco friendly dyes also is a pertinent comment on slow consumerism and ecological preservation. I think the basic understanding that what is good for the environment is good for the body needs to seep into each one of us. If the influencers, celebrities, designers start promoting traditional hand crafted textiles, it’s bound to trickle down. 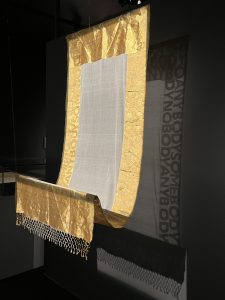 ELLE: There are many caste and religious connotations in this industry, do you see this changing and that craftsmanship is becoming more agnostic?

LB: Yes and no. It depends from cluster to cluster. Like some Muslim weavers will not weave animal figures, but some do. Also, the involvement of next generation designers and the market demand is making the artisans relax these connotations.

ELLE:  With the pressure to create more to make textiles more commercially viable, how do you also ensure that craftsmen are not exploited? How do you balance economies of scale and protection of the craft?

LB: Hand woven and handcrafted cannot be mass produced, nor can they be cheap. There have been loom adaptations and other manipulations to make products scalable and viable. This is bound to happen as there isn’t enough handwoven cloth to dress the whole population. If one can afford it, one should make them a major part of their wardrobe. The demand and appreciation can only bring about financial well-being and dignity to the craftspeople. There should be policies and platforms, providing fair price and recognition to the artisans in order to ensure both. 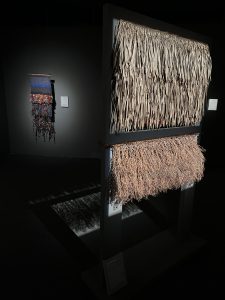 ELLE: Right now, does education of the community creating the craft take precedence or the end product?

LB: Apprenticeship is integral to transferring generational knowledge of the crafts. How that craft will be interpreted in the end product depends on the market demand.

The Sutr Santati exhibition is being held at The National Museum, New Delhi  from 20th August to 20th September, 2022 from 10 am to 6 pm (except Monday and public holidays).

If you want to read about lesser known weaves, click here.