Artisanal, handmade, locally sourced and sustainable. These are the recent buzzwords of our industry that brands love banking on. Even if they’re the farthest from implementing any of those concepts remotely in their supply chain. But Tilfi’s a breath of fresh air. Distant from the tokenism fueled chatter, aiming to spotlight artisanal revival in its truest sense. 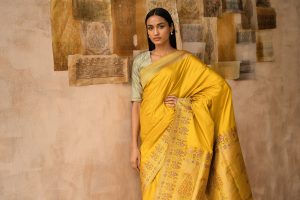 In a conversation with Tilfi’s co-founders Aditi Chand and Ujjwal Khanna along with ace textile designer Sribhas Chandra Supakar, we gained tremendous insight into their new series of handwoven sarees titled ‘An Artist’s Legacy.’ On asking about the idea of going ahead with the revivalist route, Aditi answered, “We began the process roughly two years ago and the designs had been in our family archives for several years. They’d been lying unfinished and it was our father who’d commissioned these designs from Padma Shri Late Jadunath Supakar who made the prints which never saw the light of the day due to his untimely passing. We frequently go through our archives and as someone rightly said, in craft, you’re always working backwards into the future. It’s sort of a point of reference where we’re always looking at museum pieces or even our own designs to gain some inspiration.” 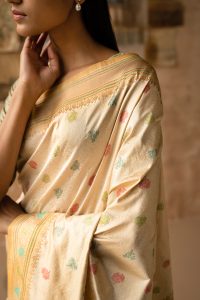 After laying the groundwork for reinstating the completion of half-woven Banarasi sarees from their archives, Jadunath Ji’s son, Sribhas Chandra Supakar who also happens to be a Padma Shri awardee took up the responsibility of finishing his late father’s heirloom pieces after being approached by the founders. In Banarasi sarees, the balance between the placement of patterns and the negative spaces in the design is a make it or break it and this was exactly where Late Jadunath Supakar Ji came in with his artistic prowess which Sribhas Ji has tried to emulate.

The Challenge Of Catching Up On The Legacy 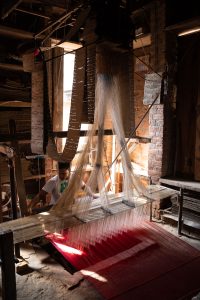 Sribhas Ji added, “Replicating the half-done borders, buttis and the pallu which were initially woven using older looms with different capacities, widths and techniques were easier said than done.” But being in the same family surely did equip Sribhas Ji with the necessary aptitude and skillset to take upon the mammoth challenge of furthering his father’s legacy. It was of foremost importance to create a finished piece that looked as if it was made by a single person. Especially the distinctive and innate intricacy in the way the textiles had been rendered made it all the more vital to translate the artistic signature with utmost precision. This harmony that Tilfi strives for, is the hallmark of Banarasi textiles in general. On asking Sribhas Ji whether he’s satisfied with the outcome of the finished pieces, he laughingly said, that it was up to us and the potential customers to decide. And as for us, we have ample faith in the designs given his mastery and dedication towards the craft.

A True Marriage Of Craft & Commercialization 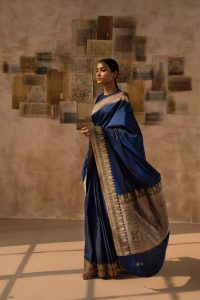 Aditi also stressed upon the need to delegate the weavers into the conversation rather than parading them on the sidelines. Sribhas Ji mentioned that “It’s highly essential for the weavers and brands to work hand in hand. Many weavers have failed to commercialize the craft when working as a single entity. From colouring to drawing and designing, the added pressure of looking into the business aspect can be beyond daunting.” This is where brands with empathetic founders and managers come in to help the craft as well as the business stay afloat and moreover, ensure prosperity all around. 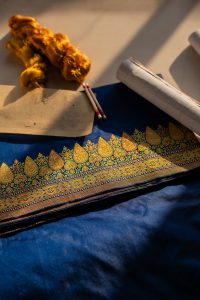 Keeping this legacy driven pursuit of Banarasi weaving alive is at the core of the brand Tilfi. Aditi added, “We want the limelight to shine more on our craftspeople and the entire community effort that it takes to create even one textile. We want to change the narrative and question the way we misuse the words heritage revival and Banarasi.” Take a look at their documentary showcasing the birth of this very revivalistic concept and the message that follows.

Fashion - Trending - What To Wear