Ensemble was born in December 1987. It was the brainchild of my brother Tarun and his wife Sal. Back in the early days, when they were just starting out in life, Sal used to model to supplement their income. She once modelled for the Pierre Cardin fashion show in India, and Tarun, who was in the audience and has always been artistic, was mesmerised and thought about creating a platform to promote local Indian talent. So they converted a machine tool showroom in Mumbai’s distinctly ‘unfashionable’ Kala Ghoda area into a first of a kind experience in India. I am proud to say that to this day, Ensemble continues to stand for finding, nurturing and promoting Indian design talent. Almost 90 per cent of the top names in Indian fashion have been launched at Ensemble, Kala Ghoda, from now household names such as Manish Malhotra, Anamika Khanna, Rohit Bal and Amit Aggarwal, to budding young talent like Sunira, Kshitij Jalori, Chandrima and Aseem Kapoor. 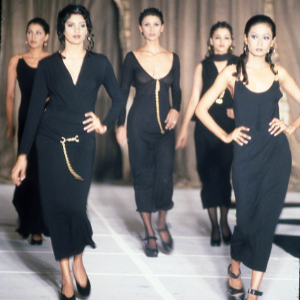 After a stint as an investment banker in San Francisco, I joined the business at the end of 1990, and in a few weeks Tarun dropped the bomb on me that he was off to study at FIT, New York. To say that I was petrified would be an understatement—it was pretty evident that I was going to take care of his baby until he returned. When he did, he was clear that he wanted to be full time in design and I had made up my mind that retail and the changing landscape in India were far more exciting than banking. Shall we say the rest is history! Our yearly fashion shows have always been super exciting. They were like the precursor to fashion week; with the who’s who of Bombay (now Mumbai) in attendance, sometimes with their dogs! The models gave it their all, sometimes sitting with sugar syrup in their hair the whole night to achieve a certain effect. The most exciting show was when we flew 200 of our top clients to Goa and did a fashion show and sit-down dinner on the beach. The heavens came down after the show and the party moved indoors to the discotheque and to the pool after it stopped raining. This idea came from Simi Garewal, one of our earliest patrons, staunch supporters and now a good friend. 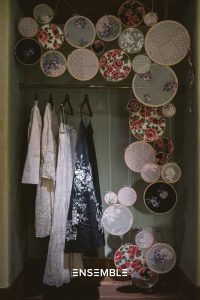 Finding and discovering new designers has always been my favourite part of the job. I remember reading about Abraham & Thakore in a magazine and going to Delhi to persuade them to start retailing with us in India. At the time they only ex-ported to the Conran Shop in London and other boutiques in the UK and Europe. Later, they told me that dealing with Ensemble was as or more professional than dealing with their international partners. I still have a piece from their first collection at Ensemble—a striking black and white ikat dupatta. Similarly, I remember sitting in Tarun’s family room in Panchsheel Park (by then Tarun had moved to Delhi) with my baby Sumer in my arms, and Rajesh Pratap Singh coming in to show us his work. I was wowed by his neat pintucks and his minimalist approach to design. 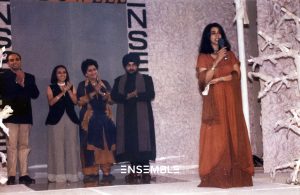 This was the start of a new revolution where our designers were taking local craft, modernising it, making it contemporary, and presenting it to India with pride. In the years leading up to the opening of Ensemble, the sentiment was that we had our Benarasi and Kanjeevaram saris and our Jamevar shawls but that the west was far more exciting in terms of clothing and creativity. To see the shift happen and for our heritage to be looked at with new eyes, and reinterpreted was in my mind a huge and exciting shift. This was ‘Made in India’ way before that was a concept. The industry was incredibly experimental in the beginning as no one was weighed down by commerce. It was all about discovery and exploration. NIFT started, fashion became a viable profession and we provided the plethora of talent in the market a platform. Simultaneously, a range of professions became available to young India—fashion photography, make-up, styling, fashion journalism. It was the birth of a new industry and I would like to think that Ensemble played an important role in this shift as we set the standard. 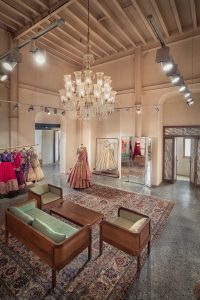 Indian fashion veered towards wedding-wear in the late ‘90s but by the turn of the century, there were new names emerging in non-embellished, non-bridal space that we termed ‘contemporary’. It was very exciting for me to work with these designers and I eventually decided to dedicate a section of each of our stores to this category. Designers such as 11;11, Amrich, Injiri, Bodice, Lovebirds, 431-88 by Shweta Kapur, Arjun Saluja, Notebook, Antar Agni, Chola, Divyam Mehta, Rara Avis are all part of this genre. The next big wave was that of textiles. In the ‘90s, we supported Tushar Kumar to create a line of Benarasi saris, the likes of which were not available in the market anywhere. I made a personal pledge to support the sari when I heard that more and more young women in India were switching to the salwar kameez, even in the south. We had great fun collaborating with Sanjay Garg to help establish his label Raw Mango in Mumbai. Kshitij Jalori, Payal Khandwala, Akaaro, Hemang Ag-garwal, Anavila, Studio Medium are all part of this revolution which brought textile saris back into fashion and made them cool. We have always had a fantastic roster of clients which has included tastemakers and creative souls like Rekha, Katrina Kaif, Neetu Singh, Goldie Hawn, Naomi Campbell, Jemima Goldsmith, Sting and his wife Trudy, Jade Jagger, Liz Hurley (she bought her wedding sari from us) and many others. 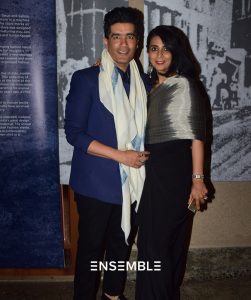 Tarun and I have always had a great working relationship- we each have our own area of expertise and give each other advice and unstinting support. We wanted to ensure that we always put family before business so a few years ago we decided to separate ownership with me taking over Ensemble and him continuing to lead his eponymous brand Tarun Tahiliani. He has been a huge source of inspiration for me as have designers like Anamika Khanna, Wendell (Rodricks),Savio (Jon), Rohit Bal, Shahab Duraziand many others. I believe that my fashion school has been working with these unbelievably talented and visionary designers over the last 30 years—it has awakened in me my love for art, craft and design. As a student at Stanford, I wanted to go into the development sector. Today I feel, in a strange way through Ensemble, I have been able to do just that—by supporting craft and young talent in our country, by giving designers a platform to realise their dreams, by empowering women to work and have enriching careers. Today the business has expanded to include accessories and menswear and has gone online. The industry has moved to the next level as many designers have received investments from corporate houses and have raised private equity. To see the industry mature like this from what it was thirty five years ago is very exciting for me and to have my daughter Aria choose to join me in the business is a proof of the potential that lies ahead. Conversations around sustainability are becoming increasingly relevant. The pandemic has taught us many lessons. It is an exciting time for us as we celebrate our 35th anniversary.