Weaving Modern Narratives: 4 Fashion Designers On The Past, Present And Future Of Indigenous Textiles

The poignant role of khadi in India’s freedom movement paved the way for the global appeal of hand-woven Indian textiles. In the ‘80s and ‘90s, Martand Singh, the erstwhile Rajput prince and textile conservationist from Kapurthala, joined his mentor and legendary cultural activist, Pupul Jayakar, in a tireless pursuit of reviving and conserving India’s heritage of textiles through nuanced exhibits and research. Clearly, the rich legacy of Indian textiles is a proud testament to people’s history and their relationship with the environment. The laborious task of revival never took a backseat as the vanguards of textiles took to restructuring and rebranding to adapt to the changing narrative. As a result, the virtues of indigenous textiles are rooted in our shared cultural conscience, which seamlessly blends heritage with the contemporary. We speak with four such textile-driven fashion designers who are breaking new ground in long-standing traditions.

The textile industry has made a sharp recovery post-pandemic. The collective strength of the industry was on display when the proposed increase in GST on handlooms was floated as an idea and was shot down by the concerted bargaining power of the industry. It was an excellent example of the industry closing ranks and working collaboratively to put forth a view beneficial to many stakeholders, highlights KH Radharaman, Founder and Principal Designer of House of Angadi.

Khushi Shah, the creative director of Shanti Banaras, recounts one of the hallmark moments of the year when Shrimati Droupadi Murmu, the first tribal woman to become the President of India, wore a handwoven sari to her swearing-in-ceremony. It was a huge shout-out to India’s handloom heritage. In a similar vein, even entrepreneur and socialite Natasha Poonawalla opted for the six yards at the MET Gala this year. A new window of opportunity opened up for designer Gaurang Shah and his eponymous label, with digital consumption rising exponentially. It helped him to upskill his weavers in newer jamdani weaving techniques. 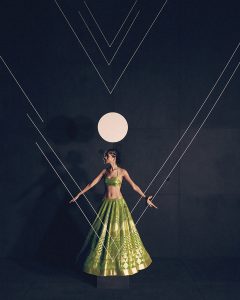 Festive wear in India has always been about tradition, and it has been reinforced post-pandemic. After two years of muted celebrations, the Indian occasion wear segment has been restored to its rightful place. Radharaman shares, “As a new trend, we see a lot of fusion wear and cross-cultural impact in how ensembles are being paired. Young women opted for saris for their big day, Alia Bhatt being a case in point.” An imperative point in understanding Indian fashion is to know there is much more to design than embellishment. Design and innovation can co-exist with tradition as long as neither are forced fits.

Real stories aid in an efficacious portrayal of the brand’s essence that resonates deeply with luxury fashion consumers. Khushi explains, “Textiles speak through our brand campaigns. Our latest collection, ‘Jmiti’, is inspired by artist SH Raza’s study of The Bindu. The collection of lehengas reimagines the spiritual iconography that became the epicentre of the artist’s universe. Our earlier campaign, ‘I am Shanti’was an ode to Banaras—its people and culture.”

“If you have watched our fashion shows,” Gaurang continues, “You would know that we have always narrated a story. One of the major milestones is the creation of Raja Ravi Varma’s paintings on khadi saris. We also created ’Santati’– over 600 shades of naturally dyed textured silk yarns were developed to give the 3D effect while recreating the paintings in Jamdani weaves.” This opportunity helped the women weavers to showcase their exemplary jamdani skills and determination. Ekaya Banaras has always been rooted in constant innovation. The powerful imagery of their campaigns attests to it. “One of our vibrant collections inspired by the animal kingdom, ‘Ambush’, celebrated the transformative power of unexpected pairings like the sensual peek-a-boo blouse with crisscrossing strappy accents, worn with a sari. Though the ensembles were crafted with a deep respect for the ancient weaving tradition, the imagery celebrated the unbridled joy of adventurous dressing in the post-pandemic world,” Palak recalls. 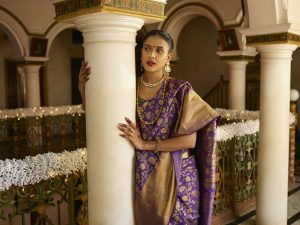 While the conversation around India’s textile vista opens up about what has been explored, there is still so much to learn and reinvent in the modern world, Gaurang feels. “We would like to consolidate our strength in leading the weaving renaissance.” Speaking the language of the future, Shanti Banaras has been actively trying to revive the concept of real zari saris. Khushi elaborates, “We have a vault of around 170 real zari saris and also provide a certificate of authenticity. The vision is to preserve the value of the unique and complicated style of weaves that distinguishes itself from the ordinary.”

Radharaman believes there has been a significant infusion of capital in the industry over the past two years, and 2023 will decide the fate of many of these investments. “Next year will mark the culmination of many journeys we started at the turn of the decade. This year ended with the launch of the menswear line under Advaya and 2023 will be the one of consolidation,” he concludes.

For more on textiles and weaves, read here.