World Wildlife Day: 5 Wildlife Photographers & Conservationists That Will Inspire You To Save Our Forests And Its Inhabitants

I’ve been an animal lover all my life but my first tryst with a safari happened only in 2018. My visit to Tadoba-Andhari Tiger Reserve is a memorable one, not only because I spotted the popular tigress Maya–I mean, of course I was on cloud nine as I got to watch the majestic being do her own thing for a good 15 minutes–but also because I learned so much about nature and wildlife by just going on a couple of safaris. There’s no doubt a sight of a big cat in the wild leaves you mesmerised. However today, many people go for safaris with the desire of only sighting the animals the jungle is known for. According to me, it doesn’t stop there. There’s so much more than boasting about the fact that you spotted a big cat. Instead, take a moment to appreciate the forest and its landscape. The forest has so much to offer. It was here that I learned that tigers are territorial animals and need lots of space to thrive but can’t due to deforestation.

Fast forward to today, our green pastures have increased (surprising, I know) and so has the tiger population. And that’s all thanks to some of the coolest wildlife conservationists we have today.

My camera is my best companion during safaris and as soon as I spot any fascinating animal, I instantly attempt to capture it. Going back home, I always share a picture of the animals I spotted and try to share some learning about them. This is exactly what tons of wildlife photographers, presenters and conservationists do too, but on a much larger scale of course as they do it for a living, and are dedicated to the cause of preserving the ecosystem. This World Wildlife Day, read about some of the passionate wildlife photographers and conservationists who are the best in the game. Through their social media, you learn so much about animal conservation. And if you’re a wildlife enthusiast just like me, don’t be surprised if you’re tempted to go on safaris more often and learn about the various forests and animals in India.

Remember when photos of a gorgeous black panther that went viral on social media in 2020? Named Saya, the black panther of the dense Kabini forest in Karnataka’s Nagarhole was photographed by Shaaz Jung. The photographer and filmmaker spent three years tracking and filming Saya for a documentary on National Geographic.

Jung’s love for animals was shaped by his parents who spent a lot of time in the forest and that instilled a deep love for wildlife in him. But if you follow Shaaz on Instagram, you’ll see how fond he’s of leopards. His first leopard encounter was with a young male that he called Scarface and the photos and videos from his initial days tell us that the introduction to Scarface is what made Shaaz fall in love with wildlife photography. “I’ve learnt more from leopards than I have from humans,” said Shaaz in an interview. Besides capturing the big cats in the wild, he also runs wildlife lodges in East Africa and South India, one of them being his family’s eco-friendly resort The Bison in Kabini.

Aishwarya Sridhar spotted her first tiger at the age of 10 at Pench National Park, Madhya Pradesh. This sparked in her, a love for wildlife and started her off on a journey of exploring nature through the medium of photography and film. In 2020, 24-year-old Aishwarya became the first Indian woman to receive the 56th Wildlife Photographer of the Year award for a magnificent shot of fireflies. She also filmed the documentary, Tiger Queen Of Taru, which aired on National Geographic this year and traces the remarkable life of Maya from the Tadoba-Andhari Tiger Reserve. Recently, she became the first Indian selected as an Emerging League member of the International League of ConservationPhotographers, US. Besides tigers, Aishwarya also likes to get creative while photographing insects.

During an interview with ELLE, she spoke about how photography aids in spreading awareness on conservation and said, “For me, conservation is about protecting the present so that future generations can thrive as much as we are. And as a wildlife filmmaker and photographer, I can create that impact. The visual medium is strong and difficult to ignore. I hope my photographs and films evoke that passion, engage people and enable them to act, stand up and raise their voices against environmental injustice and create a sense of love for the environment.”

The 26-year-old wildlife photographer, presenter and conservationist has a very engaging and fun Instagram account. While you’ll see some beautiful shots of animals, mostly tigers, Suyash always educates his followers on animal behaviour and the need to save their habitat. Plus, he’s super relatable which draws you in to the subject even more. His passion for wildlife developed in childhood. In 2019, Suyash quit his full-time job of Political Advocacy in Washington D.C., USA to become a full-time wildlife presenter. He produced his first series #SafariWithSuyash for WWF International which is a real-life web series about a young person’s life with tigers and conservation issues surrounding the species, centred in Bandhavgarh National Park. And has now launched the World’s first-of-a-kind Wildlife OTT Platform, Safari with Suyash- TV.

He swears by the quote, “What we can see, we can love. And what we can love, we will fight to protect.” And that’s his goal–to tell stories that would evoke passion in hearts and minds across the world and urge them to play their part in conserving our natural heritage. As a part of this effort, Suyash also leads wildlife safari and photography tours all across India and Africa–a part-time job I’m considering in my future for sure!

Currently based in Vancouver, Canada, the naturalist, conservationist photographer strongly believes that people need more awareness about the planet and should travel and see the already fragile eco-system. Only then will they be able to contribute their part to help conserve the earth’s resources. Growing up, Nisha had access to the wildlife surrounding her. Due to her father’s job with the Indian Airforce, she was constantly moving from one home to another. Some had a mini forest just a few footsteps from her door, another was close to a snake temple and some with backyards including over ten varieties of birds. Naturally, her interest turned to passion.

From the backwaters and rainforests of India to the grass plains of Masai Mara; from the crater of Ngorongoro to the deserts of the Middle East, she has spent days and nights passionately following the landscapes, flora & fauna, birds and wildlife of these places. In order to start conversations on conservation, she co-founded Paw Trails, a community of photographers, wildlife lovers, travellers and conservationists, with Hermis Haridas.

If you’re a bird lover, Rathika’s Instagram profile will inspire and educate you. She has photographed so many species, her account has become like a digital bird encyclopedia. Interestingly, Rathika is India’s first woman wildlife photographer! She was always drawn to nature, especially birds, which became her source of inspiration. Even though she had the chance of entering the software industry, she chose her passion and turned it into a profession. Her initial steps towards wildlife photography began at Rajasthan’s Bharatpur Bird Sanctuary, which is a UNESCO World Heritage site. Fast forward to today, the Chennai-based photographer is a founder member of WCI (Wildlife Conservation of India) as well as holds numerous accolades, one of them being acknowledged as the best-known woman photographer across the world on the Internet in 2018. 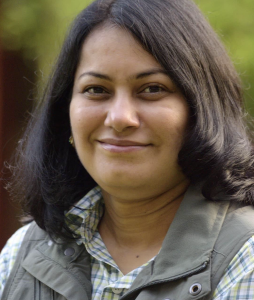 She also conducts talks to spread awareness about the importance of conservation and saving nature for future generations. For her, wildlife photography is not only a passion but also a powerful medium to connect with and conserve nature. With this in mind, she clicks every picture with the motto: Every time I press the shutter, it’s one step closer to Mother Nature.