6 Unexpected Moments From Doctor Strange In The Multiverse Of Madness (Warning! There Are Spoilers!)

The Marvel Cinematic Universe (MCU) introduced the concept of a multiverse in the very first Doctor Strange film, when the Ancient One confirmed that sorcerers can draw power from other universes and use it to shape reality itself. Although Loki, Spider-Man: No Way Home and What If…? explores the complexities of alternate universes and what damage it does, it is only that we see what all unfolds with the latest Doctor Strange in the Multiverse of Madness. So obviously, Strange had to be the first MCU superhero to deal with its repercussions. And what an exciting watch it is!

TBH, it’s nothing like the trailers. There were moments we didn’t see coming at all and the possibilities of the multiverse only gave rise to more and more theories. Many fans are of the opinion that it wasn’t as great as the last Spider-Man film, but I think otherwise, and believe you can’t really compare the two.  There were many other unexpected moments, one that caught us by surprise and made the film a visual treat. From horror elements to shocking cameos, here are 6 unexpected moments from the second Doctor Strange film. Disclaimer: Spoilers ahead!

1. This Is A Wanda Maximoff Film

While Benedict Cumberbatch left no stone unturned in portraying his role of Doctor Strange, it was Elizabeth Olsen’s Scarlet Witch aka Wanda Maximoff who carries this film. MCU has always done a great job even while casting the villains and in this one, Wanda (Elizabeth Olsen) plays that part. Upon getting her hand on the Darkhold–a forbidden book of dark magic apparently created by the first demon, Chthon–she turns her into her monstrous self wanting to take over and destroy multiverse for her personal gain. From her creepy, witch-like crawl to the use of reflections to the ability of dream walking (wherein she can possess bodies of alternate versions of herself through her mind), Scarlet Witch showcases how far her powers can actually go. 2. MCU Adds A Horror Factor For The First Time

A typical Marvel film has easy-going action sequences with dollops of humour. It is for the first time that elements of horror have been added in Doctor Strange in the Multiverse of Madness. Trust me, there are many thrilling moments that make you jump from your seat and graphic scenes that are borderline disgusting. But that’s also because the film is directed by Sam Raimi, who’s known for crafting the micro-budget horror movie, The Evil Dead as well as the very first Spider-Man film starring Tobey Maguire, and this is his speciality. 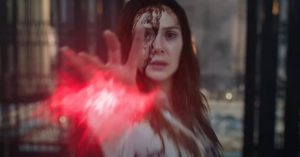 3. A Multiverse Of Surprise Cameos

When Stephen enters a different universe namely Earth-838, he is introduced to the real-life Illuminati–the secretive and powerful group of superheroes sworn to protect their universe within the multiverse. And the four Marvel characters in this group are a major surprise to us all, especially with John Krasinski portraying the stretchy superhero Mister Fantastic from Fantastic 4. Honestly though, it is very weird to see him play this role. I’m too used to him being Jim from The Office (you feel me?). It also has Patrick Stewart’s Professor X and Hayley Atwell’s Captain Carter but some eagle-eyed fans kinda knew about them as they were briefly teased in trailers of the film. The group also includes a version of Captain Marvel aka Maria Rambeau (played by Lashana Lynch) and Black Bolt (played by Anson Mount). Sadly, none of them survived as Scarlet Witch doesn’t even think twice before killing them ruthlessly, the most brutal one being that of Black Bolt. And let’s not forget Charlize Theron’s Clea who makes an entrance in the post credit scene. She is set to feature in the third instalment of Doctor Strange. 4. The Weird Universes Strange Travels Through

There’s a whole scene that shows Strange and America Chavez (the new entrant in the MCU whose power is to travel seamlessly through different dimensions) going through multiple universes out of which one turns them into cartoons and another into paint. According to Chavez, you don’t want to be there as it’s very tough to eat food when you’re in that liquid state. Could it get any more stranger? All this while, we’ve only seen Strange open portals to other dimensions. It is only in this film that we see the ‘Master of the Mystic Arts’ go deeper and uncover his true potential. As per the film, the only way to counter the Darkhold is by possessing the Book of Vishanti. But when it gets destroyed, he has no option but resort to dark magic with the help of the Darkhold, which he gets his hands on after fighting an evil version of himself (that too through musical notes, another strange yet beautifully done scene). It is through this dark magic that he dream walks into his own corpse of himself (which was brought to his universe by America at the beginning of the film). Since he breaks a rule by possessing a dead body, demons try to stop him from going further but he later harnesses the power of these demons to reach to Wanda and defeat her. What you see is a battle between a zombie powered by the souls of the damned and a witch powered by an evil book. 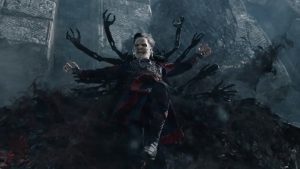 6. Doctor Strange Gets A Third Eye

I did forget to mention that the evil Doctor Strange who had the Darkhold has a third eye. So right at the end of the film, Stephen Strange also grows a third eye on his forehead. And this only makes sense, given the fact that he too resorted to the dark powers of the Darkhold. NGL tho, it does look super creepy.