Not one to be confined in a box or be pitted in a race, Amit Aggarwal isn’t even competing with himself or his last collection. The master couturier known for crafting ensembles out of material found in a scrap yard or a hardware store has entered a whole new level of zen mode. His last couture collection earned him roaring raves—both the casting and the clothes evoked an emotion in the audience. In a sea of bridal wear presented as couture, Amit happened to understand the memo.

But even with a sure shot at acclaim, Amit isn’t interested in revisiting the previous season’s blueprint. “Onyx is something completely different—the idea, the concept, the silhouettes and even the execution have nothing to do with what I’ve done before. Of course, it has the drama and the flare we’re associated with, but there’s also pragmatism in the designs,” elucidated Amit.

On the day of his show, when designers are bound to be engulfed with jitters, Amit remained calm and calculated as he took us through the journey of ‘Onyx’, his latest presentation showcased at Lakmé Fashion Week. 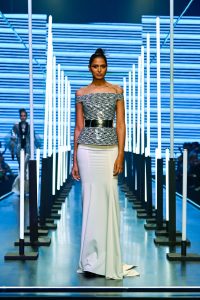 ELLE: How are you feeling before the show, what are the nerves like?

Amit Aggarwal: I’m strangely not feeling nervous. I think over the years, it’s been interesting to just come into my own being and do my best & lead the show to how it was finally meant to be. So I think I’m very happy with everything that’s been done so far and leaving the rest to the energies of the world to take over.

ELLE: Amit, your couture show last season was one of the most stand-out shows for many reasons. Whether it was for the diversity of casting or clothes. So when you do something like that, does it ever daunt you that the next presentation has to be either as good or better? Do you set yourself up for a higher challenge always?

AA: Firstly Ruman, thank you so much. It fills me with joy that you liked it. I don’t think I do that to myself, to be honest. As I said, I do my best that’s possible in the time frame & don’t leave any stone unturned. Every show, I don’t look at the perspective of what’s been done previously and I don’t think there’s a clear definition of what better is. I also think there would be an equal number of people who think that some other shows were better than this and vice versa. So, for me, at this stage, right now perfection means doing the best I can with the situations at hand and giving it my utmost energy and love. So that’s pretty much the state of mind I am in right now. 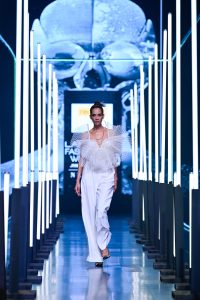 ELLE: So talking about Onyx, could you please tell me a little bit about that? The source of inspiration, the process and how you put it together?

AA: So I think it kind of flew quite seamlessly into this collection. Of course, the departure from the last two shows has been very organic. I didn’t think that I had to really force myself to come up with this collection. I mean, over the last two years, we’ve definitely spoken about the evolution of the human race, the conjunction of the new world that we live in and the different mentalities that have come to life with our coexistence. And I feel that this show also celebrates exactly that. Onyx, as a stone is something that ranges from a gamut from black to white. But I think what I celebrate with the show is all the million greys that happen between the black and white, which sometimes are unheard or untold stories. I think that is what the show celebrates. So more than anything else, it is the core idea of the amalgamation of the human race at large. This is a departure to a far easier collection per se, I think the couture always speaks of core ideas. This is a far more simpler, off-the-rack kind of collection where you can mix and match pieces. You could actually pair it with tattered denim that you’d have from your wardrobe and just put in one of our blazers from the show. So I think it’s an easier accessible adaptation of the philosophy that we’re working on currently. 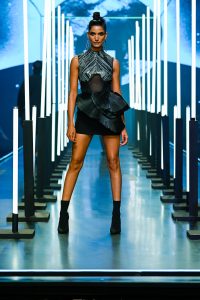 ELLE: This collection is mostly black, white and silver and colours have been a huge part of your brand. What was it like to work within a monochromatic palette?

AA: It was actually quite revelatory. Honestly, it felt a little easier. I felt that black and white are quite uncompromising in their own ways. But I think mixing it with the grey kind of makes it quite effortless and easy for those colours to sit together. And like I said, for this collection, I wasn’t trying to prove anything. Like I just felt that it was an organic succession from the ideologies that I had worked upon and kind of fell into this gamut, which was seemingly colourless, but colourful in the core spirit that it has within itself. 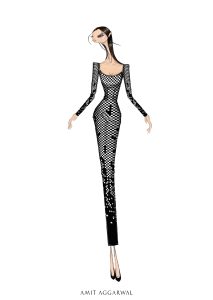 ELLE: Your signature technique is the usage of polymer—is there anything new that you’ve experimented with this time, in terms of techniques or the fabric that you’ve introduced?

AA: The fabric language is actually quite similar to what we’ve been doing, I think there’s a constant evolution. There is one significant textile that kind of becomes a hero textile for this collection, which is taking the polymer on the handloom. So we’ve kind of woven textile with actual scrap—basically, it’s scraps of polymer. Since it’s a waste of recycled material,  it’s kind of like double recycling. We’ve woven it on the handloom with this textile—it’s extremely agile, it’s fluid, it’s malleable, all of that. I think overall as I said, the collection is very pared down—of course, it’s sexy and glamorous and all of that, but it’s also easy and wearable. Something you could wear to a ball and also take to your bedroom.

ELLE: Your outfits generally have some sort of volume and structure language of their own—how are the cuts and patterns this time around?

AA: It’s definitely much closer to the body, I think we’ve kind of maintained the linearity in all the pattern cutting. There are beautiful trouser sets, there is volume, but also very controlled. I don’t think the volume is extremely over the top or exaggerated, I think it accentuates the wearer. We’re trying to open up another world for the brand—I mean, people look at us as the label that brings in a lot of theatre to fashion, which is true, but we don’t want to be defined by that. With this show, we kind of push the boundaries of what luxury pret mean for the brand. 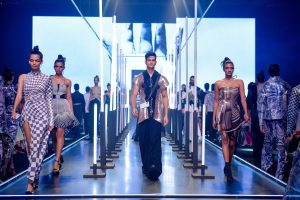 ELLE: Do you think consumers, especially in a post-pandemic world are strategic about their spending? They’re looking for more than just buying clothes, but buying a narrative instead. Have you experienced this shift in your targeted customers?

AA: I don’t think that the history of clothing has ever been devoid of storytelling. I always feel that people buy clothes because of an emotion and that has been the reason why fashion or clothing has survived for so many years. Besides, of course, its most core basic qualities that we need out of clothing. However, I feel that there should be a really good balance between the stories that you tell and the product that you make. I think that when one supersedes the other, this balance is what kind of sets the audience a little off. Like, I’m just giving you an example, if I see a great story on someone’s page, talking about clothing, or like, you know, the entire inspiration behind it, but when I actually see the product, and it’s, it doesn’t have the same gravitas, then for me over a period of time, I’ll probably lose interest because I’m just consuming a story at the end of the day, I need to be engrossed in your product. I feel that for me, it is extremely important, to find the balance. People are paying their hard-earned money to get something out of us and a story could be a great memory, but what will what they’re ultimately spending on is clothing. That value for investment is extremely important to me.

ELLE: What is the one takeaway that you want audiences to leave with after watching your show?