The Blurring Lines Between Art And Fashion At That Antiquepiece

Based out of a home studio with just one tailor and a pat- tern master, Yash Patil prefers being called an artist, than a designer. Rightly so, as the creative head for the label ‘That Antiquepiece’, he sculpts all his silhouettes by himself—from inception to its final presentation. A NIFT graduate with expertise in knitwear, Yash blurs the line between art and fashion by infusing history and architecture into it.

Vintage silhouettes are tricky, making it that much harder to replicate in detail, and Yash’s go-to eras are Victorian and Edwardian. Our curiosity about how Yash works with them, adding this contemporary twist to the garments led us to an extensive chat with him. “During the lockdown, I started working with much finer yarns, experimenting with different materials like zari, wool and cotton. I also go back to a particular era for reference because I mostly work with corsetry as a base pattern for most of my ensembles.” 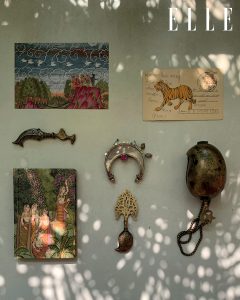 As a challenge, Yash also endeavours to make them more functional and wearable. He enlists the cut-and-paste of weird objects such as a bag or a fanned-out umbrella, to create a structured dome for a sense of direction. Explaining his unique process further, Yash adds, “Then I illustrate at least 50 to 60 sketches, depending on the number of pieces that I have to make. I don’t push practicality into construction in the beginning because that would restrict me from innovating. In terms of hand embroidery, I don’t go to an embroiderer to get things done; I incorporate my understanding of certain embroidery in a style that is personal to me. I would like clusters of pearls, sequins, 3D flowers or textiles, and bugs and moths and snakes, and develop a lot of these swatches depending on how many products I have to come up with.” 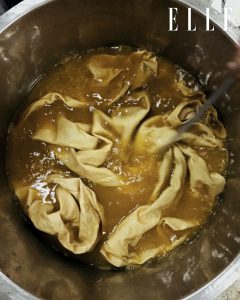 While some techniques withstand the tests of time, naturally some fall out of favour. The ask from the designer is then to make these older designs relevant. Something Yash sees as a challenge and as a source of inspiration. He says, “Corsetry emerged mostly in the 1850s. A lot of hand work went into crafting those pieces, even for the boning. Initially, it was made with whalebones, but later, steel bones came into the picture. I work with either steel or synthetic boning depending on the structure and strength I require. Earlier, the corsets were made according to a certain body type, really exaggerated shapes, as they wanted the smallest waist and the widest hips, which lead to them using a lot of bustles. They exaggerated the shape with the help of pads that were put around your waist. But that wasn’t really right for the body. When I make pieces, I prioritise mobility by working with smaller panels as it’s much easier to attain a certain shape with them. It has to be less exaggerated and not very costume-ish.” 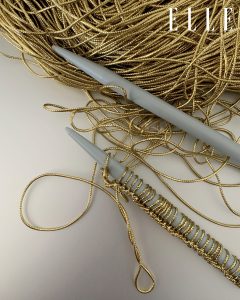 Yash works with a small cluster in Meerut. The city might not feature in the list of fashion hubs in India, but Yash opines that geography is hardly a matter; the work speaks for itself. He explains, “It’s a group of two-three women who make these pieces for me. I send them the pattern, yarn and a swatch of how I’ve done it before. If I’m making something complicated in one pattern, I break it down into steps. I start with a normal sweater or vest and then ask them to add a pattern to it. Even though the first basic sweater isn’t required, it was imperative for her to learn the new pattern design.”

Find the latest issue on stands now or download your digital copy.

You can read the Editor’s Letter for this issue here.