If faux dark circles and squiggle brows have you convinced that beauty trends cannot get any more bizarre, think again. From ingesting tapeworms in order to lose weight, to plucking eyelashes and eyebrows to make the forehead look bigger, unrealistic beauty standards in the past have made people do some very weird (and painful) things. Maybe a hundred years down the road our tanning beds and fake lashes will be considered strange too. Here are 10 beauty trends throughout history that sound absolutely insane today: 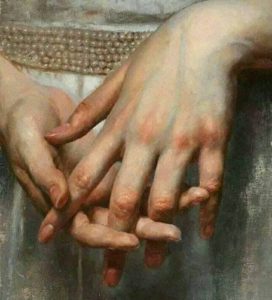 Thanks to trendsetters like Marie Antoinette, accentuated veins were all the rage in pre-revolution France. In order to make the skin look almost translucent, women would use blue pencils to colour their veins to make them pop. 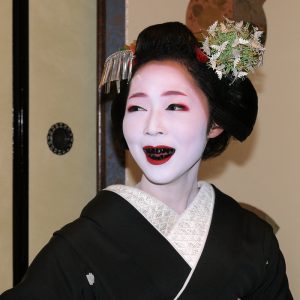 The practice of ‘Ohaguro’ or teeth blackening was a very popular tradition during the Heian period in Japan from 794 to 1185. It was seen as a symbol of beauty and maturity. Teeth were blackened using a solution called Kanemizu— a mixture of iron filings, vinegar, tea, and rice wine. Although it didn’t cause permanent staining to the teeth, it is said to have smelled awful.

The middle ages were the golden era for big foreheads. Women removed their eyebrows and eyelashes and plucked their hairlines all the way back to achieve a high forehead. The idea behind it was to resemble the head of a baby which made the women appear pure and innocent.

Queen Elizabeth I, also known as the ‘Virgin Queen’ used to paint her face flat white like a ghost. To recreate her highness’ pale appearance, women during the Renaissance period used to douse their faces in heavy white makeup. However, to achieve this ‘royal look’ naturally, they would undergo bloodletting where they would bleed themselves or would use leeches to suck their blood. #BeautyIsPain 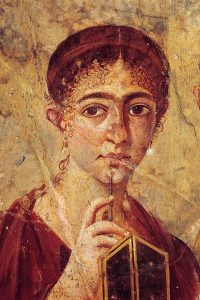 Give me two weeks to grow back my unibrow and I’d be the centre of attention in ancient Greece. The unibrow was considered to be a symbol of purity and intelligence in those times and women who didn’t naturally have this feature used dyed goat hair to close the gap.

The Victorian tapeworm diet involved swallowing pills containing tapeworm eggs that would then hatch and grow inside the host, ingesting part of whatever the host eats. In theory, this would enable the dieter to lose weight and eat without worrying.

The Victorian era was notorious for its weird and hazardous beauty standards. Victorian women loved the pale skin, red lips and thin waists that came with having tuberculosis so much so that they started contracting it on purpose. Romanticizing the disease, they also used makeup to redden their lips and make their skin appear lighter to emulate the ‘tuberculosis look’.

Wealthy women in Ancient Rome used to buy vials of sweat scraped off the skin of famous gladiators to use as a face cream. It was believed to improve their complexion. Ancient Romans also believed that gladiator sweat was an effective aphrodisiac. BRB, throwing up.

9. Whitening Face With Mercury And Lead

The various cosmetic products women used during the middle ages to whiten their complexion usually contained one common ingredient— poison. White lead, mercury, carbolic acid, and mercuric chloride were found in lotions and creams used to bleach the skin which would eventually cause health problems after extended periods of use. However, some women used these dangerous ingredients to their advantage— the brand Aqua Tofana would intentionally add poison to their powder and sell it to wealthy women who wanted to kill their husbands by poisoning their food.

Women in the 19th-century nibbled on arsenic wafers (sold by Sears!) to get a clear and pale complexion. For the most part, it did work as arsenic kills the red blood cells in the body, naturally whitening the skin. However, in addition to perfect pale skin, women could also expect vomiting, internal bleeding, hair loss, blindness and death.