#BinJin, Ranbir-Alia & More–Celebrity Couples That Met On Set And Fell In Love

One of the many things that make for a show or film good is its casting, especially the male and female leads. And once you see how good they look together and the wonderful chemistry they share on screen, all you wish is for them to come together IRL! You make a strong connection with their characters and love story, so when that translates into reality, your heart is filled with so much contentment. Fortunately, that has been the case for many celebrities. We take a look at the celebrity couples who met on set and fell in love with each other.

I’m not crying, you are! The Dimple-Dimple couple finally announced their upcoming nuptials. Crash Landing on You actress Son Ye Jin set K-Drama fandom (and us, of course!) on fire with her post. She is set to marry her co-star, Hyun Bin next month in an intimate ceremony, after being in a relationship with him for two years. “I thought long and hard about how to share this story because it’s an important one. I found someone to spend the rest of my life with. Yes… it’s him. Boy meets girl, recognizes each other in the crowd, promises to build a future together…I couldn’t imagine! It happened so naturally…But, isn’t that destiny? Just being with him, I feel warm and protected. Please help us celebrate the beginning of our future. And to my dearest fans, I have received unconditional love and for a long time now, I thought, there’s no way to repay it. Please know that I’m infinitely grateful and I also wish you all happiness!” shared Son Ye Jin on her Instagram.

The stars play Jules Vaughn (Hunter) and Elliot (Dominic) on the current hit show Euphoria. In case you haven’t watched the show and plan to, I’m giving a heads up- there’s a spoiler. Following Rue’s relapse, things get complicated between Jules and Rue, which results in the former getting close to Elliot. The characters have many scenes together in season two and also share a steamy sex scene. Maybe all the flirting and intimacy on-screen sparked some real-life romance and the couple has been spotted going on dinner dates. Recently, Dominic shared an Instagram story of him and Hunter sharing a kiss. He captioned it “Happy birthday happy birthday,” which TBH is a bit strange ’cause both their birthdays are in December. So maybe it’s just a way of confirming their relationship. Weird, but they’re cute and we love, love! 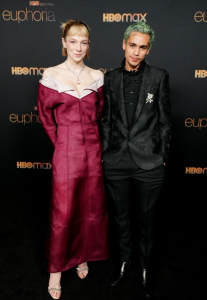 ICYMI, the Spider-Man stars reportedly have plans of moving in together. The couple has bought a house in London and I so wish I could be the fly on the wall in their home. Don’t worry, I’m not a creep, just a big and genuine fan of their love. The couple confirmed their relationship while promoting their latest film, Spider-Man: No Way Home. From TomDaya exchanging sweet comments on their Instagram pics to Tom literally stopping an interview just to see Zendaya arrive at one of the premieres–this is the kind of love we’re looking for! 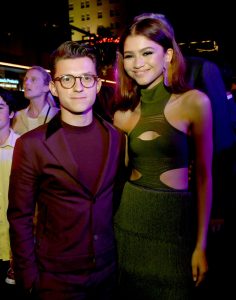 The Bollywood stars met on the set of Brahmastra and started dating thereafter. Back in 2019, Alia even professed her love for Ranbir when she received an award and said, “Tonight is all about love; there, my special one, I love you Ranbir.” Since then, the couple has been public about their romance and are spotted together at airports and other events. However, we’re itching to see their on-screen romance as the couple are quite private IRL and keep the PDA limited to holding hands or posing for photos together. They’re set to get married soon and definitely one of the celebrity couples whose wedding we’re looking forward to.

Charlie and Natalie met on the Stranger Things set, where they played boyfriend-girlfriend duo Nancy Wheeler and Jonathan Byers. This only bloomed into a real life romance. The couple confirmed their relationship in 2017 and are still going strong. We love all the appearances they’ve made in public–whether it is on a date or on a red carpet. Besides their growing love, what’s also developed is their fashion sense, which we absolutely love!

While these are some of the recent romances, there are many other celebrities who began dating and got married after filming together. Scroll through the gallery below:

Deepika Padukone & Ranveer Singh
DeepVeer started dating in 2012 after they met on the sets of Ram-Leela and fell in love. They tied the knot in an intimate ceremony in 2018.

Kareena Kapoor Khan & Saif Ali Khan
The stars first met on the set of Tashan in 2008 and fell in love right after. They got married in 2012 and as we all know, are blessed with two baby boys, Taimur and Jehangir.

Blake Lively & Ryan Reynolds
In case you forgot, let Ryan’s popular quote remind you how he met his wife. “I met Blake on the darkest crease in the anus of the universe called Green Lantern,” Reynolds joked. We've always liked the banter between the two. The pair began dating in 2011, married in 2012 and today have three children together–James, Inez and Betty.

Machine Gun Kelly and Megan Fox
So how did this couple actually meet? On the set of an Indie thriller called Midnight In The Switchgrass in 2020. The pandemic put a halt on the production in 2020 but the two started hanging out often. Megan also starred in MGK’s video Bloody Valentine and became Instagram official afterwards. The couple got engaged earlier this year.

Kit Harington and Rose Leslie
Kit played Jon Snow and Rose played Ygritte on Game of Thrones. Fans speculated the two were dating in 2012 but it was only at the 2016 Olivier Awards that they made their first public debut as a couple, and in 2018 they got married. The couple share a baby boy together.

Gwen Stefani and Blake Shelton
The singers met on the set of The Voice while being the judges on the show. However, they were both married to other people at that time. In 2015, both Gwen and Blake divorced their respective partners and confirmed their relationship in November. The duo tied the knot in an intimate at-home ceremony in 2021.

Aishwarya Rai Bachchan & Abhishek Bachchan
The actress met Abhishek while shooting for Guru. The pair fell in love while being on the sets itself and got married in 2007. They have a beautiful daughter, Aaradhya.