The Gen-Z approach towards fashion is partly nostalgic and partly futuristic. While they are heavily inspired by the ’90s and the Y2K era— going rogue with fashion and abandoning rules is their go-to move. The latest trend to get the Gen-Z treatment is the cut-out silhouette, now marinating with pride in infamy. Women in fashion have been walking the thin line between too much and too little when it comes to this trend, a single cut-out was enough to call a garment bold—until, the Gen-Zs took over.

Dresses with multiple cut-outs all stacked under each other? Sure. Trousers with a trail of cut-outs at the hip bone and the pelvic, why not? Cut-outs running diagonally from front to the back exposing half the hip? Yes Please! From supermodels like Bella Hadid and Kendall Jenner to singers and TikTokers like Dua Lipa, Doja Cat and Addison Rae—sultry cut-outs across the outfit is the only way of doing this right. Scroll below for some of our favourite fierce looks spotted by the Gen-Z celebrities. 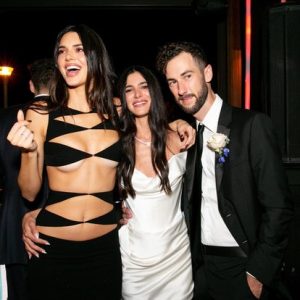 Last year, Kendall Jenner played bridesmaid at her friend Lauren Perez’s wedding and the supermodel showed up in a barely-there, cut-out black dress from Mônot. Deemed as ‘inappropriate’ and an attempt to outshine the bride, Kendall clapped back on social media by calling it the perfect dress for a beach wedding. 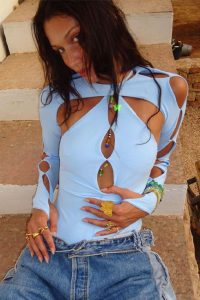 If you follow Bella Hadid’s style, you know her it tilts more towards retro-chic and vintage. The model has recently hopped onto the Gen-Z vetted cut-out trend, but with her own twist. Bella opted for a cut-out heavy bodysuit and teamed it with a pair of distressed jeans and a bunch of beaded accessories, giving it a boho-chic spin. 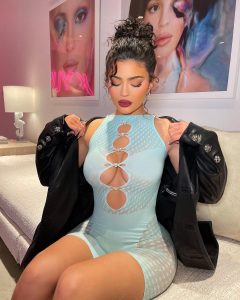 Kylie rightfully captioned the image ‘main character’ because she certainly looked the part. This powder-blue dress with multiple cut-outs in the centre-front is the current Gen-Z uniform and we are not complaining. 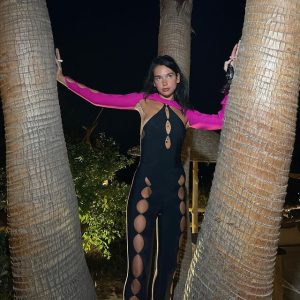 When Dua Lipa commits to a trend, she means business. Case in point: this black and pink unitard with almost 35 cutouts. Trust the Levitating singer to leave little to the imagination.

Remember the iconic outfit from season 1 of Euphoria that basically designated Maddie (Alexa Demie) the baddest bitch of all time? Yes, the purple cut-out dominating co-ordinated set became one of the most sold-out styles on multiple websites, thanks to Alexa’s conviction of carrying the risqué trend.