This is America, where it’s easier to get a gun than to get an abortion. If your Instagram feed is clogged with the Roe Vs Wade posts and you’re still clueless about the regressive situation in the USA, let us fill you in.

What’s Roe Vs. Wade All About?

It dates back to 1969 when Norma McCorvey from Texas filed a case because she was unable to terminate an unwanted pregnancy. In most states at the time, abortion was a crime unless a women’s health was at risk. In order to safely and legally pull the plug on her pregnancy, Norma sued Henry Wade—the Dallas County district attorney, under an anonymous pseudonym ‘Jane Roe’. The controversial case reached the Supreme Court in 1970—in a landmark judgement in 1973, abortion was legalised after the highest court of order recognised women’s constitutional right in Roe Vs. Wade, and allowed them the freedom to take this decision. 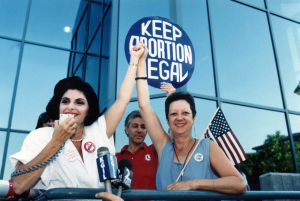 Why Was It Overturned?

On June 24th 2022, Justice Samuel Alito on behalf of the majority on the bench announced that the ‘Roe Vs. Wade’ ruling from 1973 has been overturned. Calling it “egregiously wrong, exceptionally weak, damaging and an abuse of judicial authority,” the Supreme Court officially reversed the judgment that was in place for almost 50 years. Parts of this decision were leaked in early May, igniting the fear in women over the loss of control over their autonomy—the judgement proved that the fear was not unfounded. An immediate effect of this archaic verdict is the end the constitutional protection of abortion rights. This also allows each state to decide whether to restrict or ban abortion. 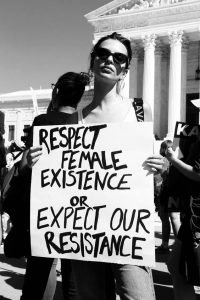 All sects of the society have come forward in expressing their disappointment against the decision, including the fashion and beauty giants who aren’t afraid to speak their minds. Brands have taken to social media to lend their support to women and their reproductive rights. Besides taking a verbal stand, labels and corporations are putting out policies for women that will help them deal with this situation. Scroll below for all the various ways in which fashion came forward and made it count.

Just after the Supreme Court ruling rolled out, designer Prabal Gurung re-launched the, ‘Girls Just Want to Have Fundamental Rights’ t-shirt and have pledged all the proceeds from it towards Planned Parenthood.

Conglomerate Kering, which owns luxury brands like Saint Laurent and Balenciaga have taken the decision of reimbursing their eligible female employees from the US. The company will take care of the out-of-the-state travel and medical expense for the same.

Through their Chime For Change campaign founded in 2013, Gucci will be voicing its allegiance to this issue. Using this initiative as a catalyst, Gucci will be raising money for helping the women in need.

Athleisure label Lululemon is donating $500,000 to the Centre for Reproductive Rights while continuing its ongoing support towards organisations like the Black Women’s Health Imperative.

Outdoor clothing brand Patagonia will be covering bail for employees who are being arrested while protesting the Supreme Court’s decision of overturning ‘Roe Vs. Wade’

For more on issues on women’s rights, tap here.