It’s not every day that we come across a realistic portrayal of female friendship on film. And while leading ladies are still very often shown as competitive frenemies who are out to win over the same guy, the world of cinema is learning to celebrate women supporting women by showcasing pop-culture friendships that pass the Bechdel test— a measure of the representation of women in fiction that asks whether a work features at least two women who talk to each other about something other than a man. Here are 7 such shows that you can watch with your gal pals:

From knee-slapping comedy to tear-jerking drama, Grace and Frankie is the whole package. With seven seasons, the show ended this April as Netflix’s longest-running show to date. The duo starts off as rivals but their one-upmanship comes crashing to a halt when they learn that their husbands are gay and have fallen in love with each other. What follows is a story about two 70-year-old women moving in together only to realise over time that you can find a soulmate in a best friend too.

Based on Kristin Hannah’s best-selling novel, Firefly Lane follows best friends Tully and Kate as they support each other through good times and bad with an unbreakable bond that carries them from their teens to their 40s. It’s a story about love, promises, secrets, betrayal and the magic of true friendship, one that will live in your heart forever.

Inspired by the life of longtime magazine editor Joanna Coles, who serves as an executive producer on the show, The Bold Type follows the life of three best friends Jane, Kat and Sutton who, while working together at Scarlet magazine, lean on one another as they try to find their own voices.

Netflix’s Emmy-nominated tragicomedy Dead to Me explores the weirdly funny sides of grief, loss and forgiveness. Jen, a hotheaded widow in search of the hit-and-run driver who killed her husband, befriends Judy, a quirky optimist who isn’t quite what she seems. The dark humour and plot twists are great but it’s the dysfunctional relationship between the duo that is the true foundation of the show.

Three suburban mothers fed up with playing by the rules and not getting the respect they deserve, decide to risk everything to take back their power. How do they do that? By orchestrating a local grocery store heist of course. Being new to the game of crime, they get pulled in deeper than they ever imagined— and the only way out of this is together. 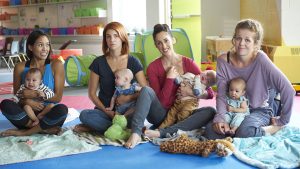 From the struggles of urban motherhood filled with the chaos of toddlers and tantrums to navigating bosses, love and identity crisis— four mom friends experience the realities of life after giving birth when they return to work after maternity leave.

7. The Sex Life Of College Girls

Created by Mindy Kaling and Justin Noble, The Sex Life Of College Girls follows four college roommates as they arrive at New England’s prestigious Essex College. A bundle of contradictions and hormones, these girls are equal parts lovable and infuriating as they live out their new, free lives on campus.