Here’s Why Fashion’s ‘Forgive And Forget’ Theory Is Problematic

Cancel culture is highly problematic; but there is a definite need to reprimand fashion labels and individuals who have publicly blundered. Thanks to social media trials, these incidents are no longer brushed under the carpet. As a result, the consumers use their buying power to hold these labels accountable, but what role do celebrities, influencers and fashion insiders play in this?

Recently, the infamous Italian design house Dolce & Gabbana showcased its Alta Moda show in Venice—to say it was star-studded is an understatement. From momager Kris Jenner and Jennifer Lopez to royal socialite Kitty Spencer and Kate Hudson, the show saw the crème de la crème of the entertainment world. But did the most influential people with millions of following forget that these are the same designers who were in choppy waters for multiple racist and homophobic statements they made, only a couple of years ago? Does a trip to Italy wash out the brand’s problematic ideology? Definitely not! And it’s about time the fashion/entertainment fraternity and media learns to read the room, we say.

As we deep dive into the subject, here are 3 times when Fashion’s short-term memory turned out to be troublesome.

1. Dolce & Gabbana And A Host Of Controversies

Last week, our social media feed was flooded with celebrity images striking a pose across the beautiful Venice, all clad in Dolce & Gabbana couture. But clearly, their fans did not take to it lightly—angry fans found this obnoxious parade tone-deaf in the light of the recent events associated with the brand. D&G aren’t exactly new to the world of scandals—in 2015, they remarked about gay adoption and IVF. “The only family is a traditional one,” Dolce had announced. “I am not convinced by IVF, those I call children of chemicals, synthetic children,” Gabbana added. In 2017, they created a shoe with the statement, ‘I am thin and gorgeous’ inscribed on it. Then came the big blow in 2018 when their Shanghai fashion show stood cancelled thanks to the label’s promo of a Chinese model eating Italian food with chopsticks, causing outrage throughout China. To make the matters worse, they got into a feud with fashion critics Diet Prada and used racist language against Chinese people, which was later made public via screenshots. 3 years later, like water under the bridge, the fashion industry has not only forgotten the attacks made on marginalised communities, they’ve gone a step ahead by celebrating them in full glory.

Recently, in a shocking turn of events, fast fashion e-commerce giant Shein has announced its new venture in the world of reality shows, but what’s even more shocking is the A-list celebrity guest panel they’ve managed to get on board. Stylist to stalwarts like Zendaya and Anya Taylor Joy, Law Roach is joined by designer Cristian Siriano and reality star Khloe Kardashian to judge the show. Not only is the Shein forever in the limelight for its unethical trade practices, but they are also known for copying the designs of young and upcoming designers and selling cheaper dupes. Each of these celebrities stands by various causes and preaches inclusivity in fashion, then isn’t it ironic for them to associate themselves with a brand that is constantly flagged for their actions? 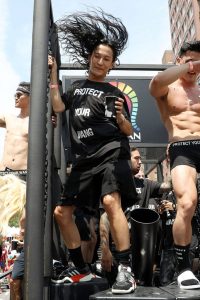 In February, a series of serious sexual assault allegations were made against designer Alexander Wang. Young male models and students came forward with their horror stories and fashion’s watchdogs Diet Prada and Shit Model Management accelerated the whole episode by anonymously allowing people to share their stories about the designer. Even after multiple victims came forward, well-known models and celebrities who are Alexander’s consistent clients and muses maintained their silence and continued to wear his clothes without any consideration towards the allegations.

Excess privilege and lack of liability from Fashion’s front-row faces is appalling. One cannot be social media heroes on one hand and do selective outrage on the other, while conveniently leaving out matters that affect your friends. If you’re in a position of strength, where making a statement by picking the right side is an option, how about doing that for the one’s who can’t?