JJ Valaya, a man of fine taste and even finer interests, is now in a league of his own. After 30 years in the industry (with only a 2 year sabbatical), JJ strictly wants to only do things that he enjoys. Whether it’s launching the World of Valaya and raising the bar for luxury or working with Academy-Award-winning costume designer ruth Carter on a magnanimous project like Black Panther: Wakanda Forever—the couturier is all about creating an experience or a moment. 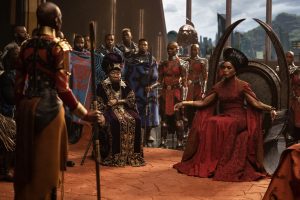 While most of the characters in the Black Panther franchise are dressed in warrior uniforms with statement-making armour, Queen Ramonda in Wakanda Forever is dressed like true royalty by JJ and Ruth, making her stand out in all her glory. Speaking about this unique partnership, which can serve as a lesson in how to infuse culture and history in fashion—JJ Valaya talks to us about this dreamy Marvel project and what’s next for him.

ELLE: How was it collaborating with Oscar-winning costume designer Ruth Carter for Black Panther: Wakanda Forever and was it your first association with her?

JJ Valaya: “The association started a few years back when Ruth Carter’s team was looking for a partner in India who could work with them on creating clothes for Coming to America which was an Eddie Murphy starter film—they finally discovered us and that’s how we got working together. This is our second project in Hollywood with Ruth Carter and this one of course is extremely special in more ways than one. We worked on this collection for nearly eight months as it involved a lot of to and fro and a lot of R&D. We were working closely with Ruth’s Studio in Los Angeles to create specialised fabrics, techniques, designs and prints to make sure that the look and feel is in tandem with what Ruth had in mind for the entire film.” 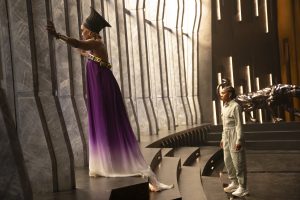 ELLE: What was the research that went into designing the costumes for Angela Bassett’s character – Queen Ramonda and how was the process of putting it all together?

JJ Valaya: “Well, you know, essentially, Black Panther is a movie where the only opportunity one gets to create the kind of clothes we do, is for Queen Ramonda. The rest of the look is fairly futuristic or semi-casual, But when it comes to Queen Ramonda, and especially in Wakanda Forever, where she is now the Queen and has to appear authoritative and take hard stands, it was very important to kind of reflect the character in that way. We worked on 70% of all of Queen Ramonda’s looks in the film. The simpler pieces (two or three) of casual outfits were handled by Ruth herself out of LA. But we actually sat down and worked in extreme detail on how to create the aura that the Queen needs when she’s taking control of the kingdom.” 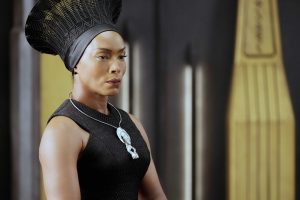 ELLE: What are the fabrics, crafts and embroidery techniques you experimented with while designing for this royal character?

JJ Valaya: “We are all about craftsmanship which is why Ruth came to us. She recognised that we have a skill, which is unique—she respected that and honoured it. There is no place like India when it comes to exquisite craftsmanship, but in this particular case, 3 processes were involved (a) Identifying and developing some special fabrics,(b) Working on a wonderful surface through the medium of prints, so the creation of prints themselves (c) Of course, the embellishment process that goes onto the garment was the signature Valaya ethos—like extremely fine thread work used with antique stones, vintage metals, subtle glitter so that it looks almost museum-like and not like something new and brash.”

ELLE: While Wakanda is a fictional African nation, you still had to bring about their culture and authenticity in your designs. How did you do that?

JJ Valaya: “Well you know there’s wonderful chemistry between Ruth and myself which works amazingly when you’re working on a project which is so special—so obviously, the initial thoughts and ideas came from Ruth because she took a holistic overview of the film at large. But when comes to fine-tuning, tweaking and detailing it out—the actual creation of the outfit, deciding prints based on the mood board, parallelly developing textiles and then working on them with various forms of embellishment—that was a combined effort. It’s not something that happens over a period of time, but as you know that Wakanda is a fictional African nation so obviously the motive and everything were loosely based on the Mayan culture as well as African influencers, but putting it all together involved a lot of to and fro between Ruth and myself and eventually, we came down to the exact look that we wanted to work on and of course, I am glad at all that kind of worked out so perfectly.”

ELLE: Editorial and costume designing are two different ball games, how did you navigate between the two and create a synergy for this project?

JJ Valaya: “Well I think the primary difference that I noticed was besides of course the professionalism was the humility and the respect, and I think that completely changes the energy of a situation when you are working together on something absolutely wonderful. I have often missed that because I’ve noticed in India, success does seem to go to everyone’s head much faster probably and that starts reflecting in one’s attitude. Working with Ruth and her team was great because they were forthcoming, helpful, extremely meticulous in their planning and detail-oriented.”

JJ Valaya: “Yes, you are right, the two-year sabbatical that I took was a much-needed one. Post that of course, we had COVID, but we used that with good effect, in giving shape to all the plans and ideas which were floating in my mind during my sabbatical. Of course, a lot of action has happened since then, Some amazing shows, a brand new baby, the incredible World of Valaya which opened in Delhi. Spread between fashion and home, we launched our bridge to luxury line and a lot of things are in pipeline. When it comes to projects such as this, the fact that we have been able to create something for perhaps one of Hollywood’s largest projects for this year, to be able to work with the Academy Award-winning costume designer not for one, but now for my second film, soon probably we will be starting the work on the 3rd one. To be able to actually see what we can create on talent powerhouses such as Angella Baset, I think there can only be gratitude, no other emotion than gratitude, and an absolute joy to many more interesting initiatives in the years to follow.”