Fashion has always been a major part of K-pop, and it’s time the fashion industry gave them the credit they deserve. The brands not only gain massive interaction and buzz on the Internet from K-pop fans making them all the rage but the products fly off the shelves which works well for every brand’s bottomline. BLACKPINK’s Jennie, aka the sold-out queen, recently wore a cutesy anime-printed top from JW Anderson to her soundcheck. The shirt quickly sold out on the JW Anderson website, as well as the SSENSE and FARFETCH sites. Apart from this, brands like Dior also saw a huge hike in their stocks following the news of Jimin joining the brand as an ambassador; this happened for the first time in 31 years, since 1992.

Dior’s stocks skyrocketed to an all-time high following the announcement naming Park Jimin as Dior Global Ambassador. It’s the highest stock price for Dior, which has been in the stock market for 31 years, since 1992.

The Jimin Effect is insane! 🔥 pic.twitter.com/JUoVTvZwdI

The K-mania continued at the Milan and Paris fashion weeks, with BTS members Park Jimin, J-Hope, and GOT 7 Jackson Wang drawing thousands of K-pop fans to the show venue. The Louis Vuitton show was a combination of music and mayhem with Rosalía’s live performance but all eyes were on the brand’s newest family members.

BTS members have come a long way from performing at local fashion shows in Seoul to taking over Paris Fashion Week. These k-pop idols took the spotlight at every show they visited. It’s not every day in Paris or Milan that you see people forming long lines to cheer on their favourite Korean celebrities.

So, if you are a K-pop fan and a fashion enthusiast, this is how K pop stars are establishing global domination in the world of fashion.

There is no denying that BTS’s sunshine is the group’s biggest fashionista. J-Hope’s zip-up jacket over a silky button-up shirt paired with trousers was covered in a purple, burgundy, and black camo print and stamped with the LV logo. His look was a nod to a look he favours, riding on high fashion energy; he also paired the look with chunky burgundy sneakers and a subtle bijoux necklace. The best part? J-Hope was one of the first celebrities to wear the new print, which debuted on the runway.

As an Army would say- LITERAL SOULMATES. J-Hope joined his best friend Jimin for his Dior debut, wearing a classy dark grey ensemble and quirky, chunky high-top shoes, in addition to his signature dark sunglasses and clean slicked-back hair. Among the sea of suits and blazers at fashion week, his look stood out the most to fashion enthusiasts. 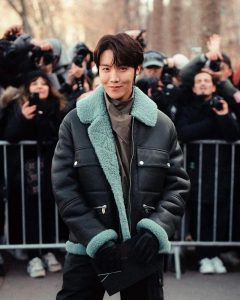 J-hope continued his main character energy at the Hermes show as well. The BTS rapper stepped out for his final fashion show of the past week at Paris Fashion Week Menswear Fall/Winter 23/24. He was spotted in a beautiful jacket with teal green detailing on the lapels and black gloves that completed the look. He was dressed in black pants with a grey shirt . At the end of the week in his Instagram post, he showcased a recap- a testimony to just how much fun he had.

The GOT7 member aka Magic Man is the newly appointed ambassador for the brand who stunned in a sharp suit and a bright pair of Louis Vuitton monogrammed sneakers. The rapper wore an oversized black blazer with perforated sleeves and zigzag details on the hem, which he layered over a dark blue and black top. The Pretty Please singer styled his look with black high-waisted trousers with a satin finish. Wang accessorised with silver Louis Vuitton logo studs that matched his grungy lip ring, which is definitely something he is taking on his Lollapalooza stage this weekend. The musician also wore a pair of reflective biker sunglasses atop his head.

The newly appointed Dior global ambassador sat front row at the Dior fall-winter 2023-24 menswear show during Paris Fashion Week. The BTS member looked dapper in a monochrome look with a tan suit, turtleneck, and matching boots from Dior Men’s 2023, which was designed by Dior Menswear artistic director Kim Jones. BTS’s collaboration with Dior began in 2019 when Kim designed the group’s “Love Yourself: Speak Yourself” world tour wardrobe. Jimin’s collaboration with the brand had a great buzz on social media; the announcement post by Dior on Instagram featuring Jimin is the brand’s most-liked image ever surpassing another K-pop star Cha Eun Woo.

The NCT member attended the YSL show in Paris. His attire and eye-grabbing neckline were stealing all the attention and got fans talking. Dressed in the brand’s iconic and sleek head-to-toe black ensemble, Ten completely stole the spotlight. And if the 1.4 million tweets (and counting) on the #SaintLaurentxTEN trend are anything to judge by, it’s totally true!

The K-pop nobility is the newest face of the brand. Taeyang from Big Bang arrived at Givenchy’s fall 2023 menswear runway show in Paris attired in a streetwear-inspired ensemble. Taeyang wore a full Givenchy look, including a black hoodie with distressing and deconstruction at the hemline, slim-fitting charcoal jeans, and black chunky-sole shoes, to join the rest of the star-studded front row in celebrating Givenchy’s latest menswear offerings. Rings, diamond stud earrings, and a bling necklace completed his look.

Jeonghan’s unique visuals managed to draw a lot of attention. The SEVENTEEN member was the picture of flawless grace, dressed in all-black Yves Saint Laurent signatures. If you are a K-drama fan, this look will definitely remind you of the male leads in the show who wear long coats. Also, don’t miss his high-heeled boots.

K-pop superstar and EXO member stole the show at the Gucci runway presentation at Milan Fashion Week. His look was a black Gucci suit with red plaid detailing and gold buttons, layered with a pastel blue shirt fastened with a classic slim black tie. He finished the suit with a pair of chunky square-toe motorcycle boots. This is giving classic Gucci Glamour. 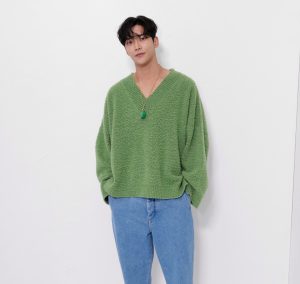 Sf9 member Rowoon debuted in the Loewe runway show, which transported the audience into an art gallery with Jonathan Anderson serving as the main curator. The K-pop singer styled a cosy comfortable green sweatshirt with timeless blue jeans and the brand’s newest Studio Ghibli collection accessories. 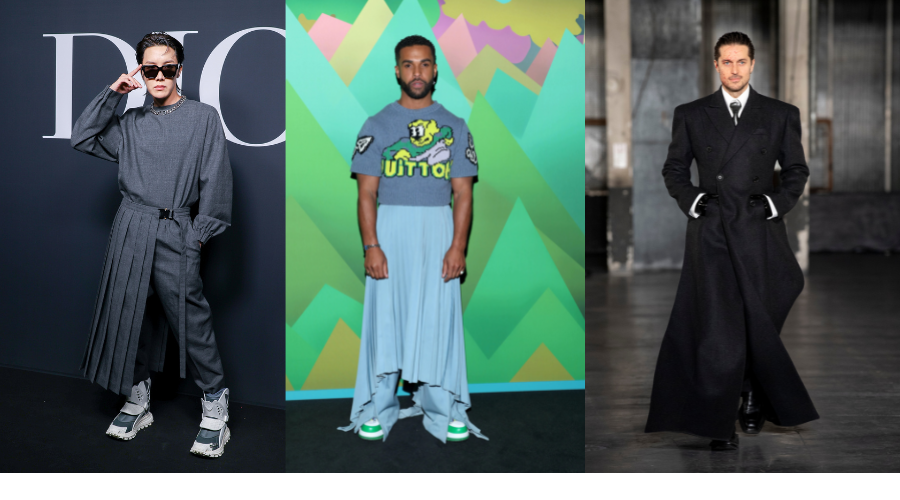 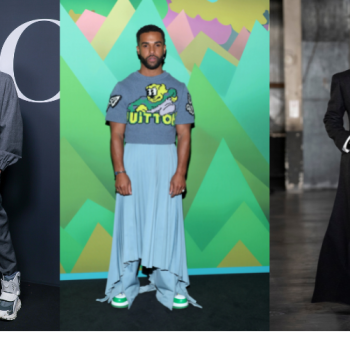