Ms. Marvel is an original series by Marvel Studios, it presents a teenage Muslim girl Kamala Khan (Iman Vellani) from Jersey City as a superhero. When the news initially came out, it sent the comic and the real world into a frenzy. Not only are we now getting strong female superhero characters, but they are also finally representing minority communities. As a Muslim girl, when I thought of a female superhero—an image of a white woman with the perfect body in a fitted latex suit would instantly appear in my mind. While MCU has been pushing the boundary with more female-led comic books and characters like the Black Widow, Storm and the She-Hulk—watching a sixteen-year-old Pakistani-American Muslim girl become the new holder of the Ms. Marvel identity, makes us feel seen on a whole new level. 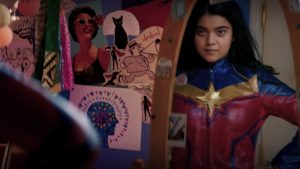 What’s even more refreshing? Kamala being a Muslim is a mere coincidence in the plotline, her entire identity isn’t based on her religion. She is just a regular teenage girl with first-world problems and inappropriate crushes, no stringent patriarchal rules shown in the negative light. Luckily, Islam isn’t the villain in her story. Unfortunately, in a post-9/11 world, Muslims on-screen were reduced to either extremists and terrorists or insignificant extras who drive cabs and play cashiers at shady bodegas. Women were specifically shown in an oppressed light, confined within homes with no voices and little to no freedom. It was not too long ago when actors, writers and comedians like Riz Ahmed, Kumail Nanjiani, Rami Youssef and Mahershala Ali from the minority community took the onus of their depiction into their hands. While there’s too much noise around inclusivity, it has mostly been tokenistic. 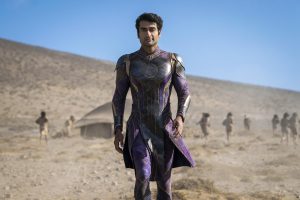 Kumail Nanjiani as Kingo in Eternals

Kamala, on the other hand, is a welcoming break from all such stereotypes. She loves superheroes, video games, fan fiction and is an ardent fan of Carol Danvers, the former Ms. Marvel. During a night of rebellion, Kamala escapes to a party like a typical teenager. After an underwhelming evening, she decides to return home and gets entrapped in a bigger problem. The Jersey city gets struck by Terrigen Mists (a natural mutagen, arising as a vapour from the Terrigen Crystals, which are able to alter Inhuman biology) and Kamala gets drenched in it. Next thing you know, she wakes up with polymorphic powers—which gives her the ability to change her body into virtually anything. 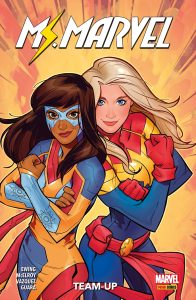 After a trial run with Captain Marvel’s outfit, Kamala makes her own costume out of a burkini. Her final suit is designed by her friend Bruno Carrelli—which is created out of a malleable super snot, that makes the outfit change alongside Kamala.  In her final look, Ms. Marvel is wearing a blue eye mask and her costume is similar in design as the comic version—except, the live-action version is embellished with sleek panels and golden embroidery and is layered with a tiny red scarf. The look is punctuated with itself with some red-and-white shoes, attesting further to her cool-girl personality. 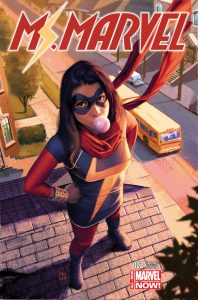 Even when it comes to her costume, Kamala’s religion has been infused as a symbol of modesty and not a garb of restraint. A concept that is still alien to many countries, especially India. Ironically, as we gear up to celebrate Kamala’s accurate South-Asian representation without any cultural appropriation or stigma attached to her silhouette, we’re simultaneously witnessing young women like Kamala, fighting for their right to freedom. Young Muslim women in the state of Karnataka have been banned from wearing a hijab to educational institutes or—while these girls may not be fighting fictional evildoers, they are raising their voices of dissent against a majoritarian state—and that’s heroic!