There’s Something About Sadie

It may have been close to midnight when I logged into Zoom for this interview, but through my screen, I met sunshine in human form—the glorious Sadie Sink. She has performed on Broadway, walked the runway and is no stranger to the camera. With an infectious laugh and a mind that goes beyond her age, it’s refreshing to hear her talk about her journey and experiences in the industry. This May, Sadie turns into Maxine Mayfield once again, for Netflix’s much-awaited show, Stranger Things 4. She gives us all the tea, and some more.

ELLE: The first look of the show’s new season looks much darker than the previous ones. What can the audiences expect?

SADIE SINK (SS): I think with season three, things felt a lot happier. It was summer, and they were kids just being kids, at least for the first three or four episodes. We left off the season in a pretty dark place and that’s where we start season four. Max is grieving the loss of her brother, and the loss of Eleven, who’s moved away. So her entire world has changed. And also, she’s headed into high school. So she’s in a completely unfamiliar environment. I think that’s the case for all the kids—you’ll find them in really different places. As we’re growing up in real life, so are our characters, so it feels a bit darker and more mature this year, for sure.

ELLE: In what ways are you similar and different from your character, Max?

SS: As I’ve grown with the character, I’ve found a lot more similarities than differences. When I first started playing her, I felt like our outward personalities were very different. But one of the most amazing things about growing up on a show and being on the TV series, as opposed to a movie, is that you get to really develop the character. And I think she’s rubbed off on me a little bit, or maybe I’ve been putting more of myself into the role. I feel like we’ve kind of meshed in, in certain areas. For example, as I grow up, I get a little bit more confident; I think maybe it’s because Max was always confident and I’ve kind of learned that from her. I love playing Max, it feels like home in a way because we go off and we do other things, film other projects, but then always go back to this character.

ELLE: If Max could have superpowers like Eleven, what do you think they would be? 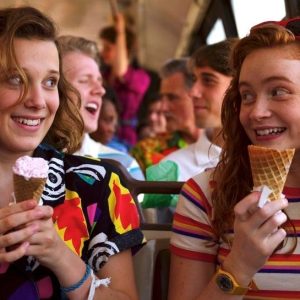 SS: I feel like reading people’s minds might suit her, I think she’d be good at that (laughs).

ELLE: If you could live in any fictional world, other than that of Stranger Things, where would you go?

SS: Oh, that’s a good question. I feel like the obvious answer is Harry Potter but I think I’d choose to be part of the Disney universe. It seems really peaceful and nice.

ELLE: What are the challenges that come with being a 20-year-old in Hollywood? And how do you deal with the pressure that fame brings with it?

SS: I feel like I isolate myself in a way. I kind of live in a bubble. It’s really hard to get me to leave my house sometimes. But I think one of the main things that has been helpful is having my family around, and the same group of friends that I’ve had since high school and middle school. It feels like my world has changed, but Sadie hasn’t. I’m still the same Sadie I would be with or without the success of the show or just everything in my career. So it’s nice to have good people around you, those that you trust and those who know you for you.

ELLE: Who or what inspires you?

SS: Right now it’s my little sister because she has recently been getting into musical theatre at her middle school. She’s really good. When I watch her I see myself when I was younger. Just seeing her growing up and finding what she loves, which just so happens to be what I love also, is really inspiring and making me really proud.

SS: The show has some really incredible fans who make amazing edits or fan art, so occasionally, I’ll go on Instagram and see what they’re doing. Other than that, I usually don’t have it downloaded on my phone. If it’s a particularly busy time in my life where I need to post some things, which is not very often, then I’ll have it maybe. I think just as the show gets bigger, I like to limit my time on social media because it’s a big audience out there and it can get a little scary.

ELLE: What is the most non-Gen Z thing about you?

SS: I go to bed at like, 9:30 pm. And lately, I’ve been waking up at 5:30 am-6 am. I have a very strict bedtime schedule. It’s great but when I talk to all my friends, they call me a grandma (laughs). There’s a lot of things about me that are old lady-like. I also don’t like to leave my house.

ELLE: If you were on Euphoria, what character would you be? Who’s your favourite actor from the current younger crop?

SS: Lexi had a good story. So I’ll go with her. My favourite actor from the younger crop would have to be Julia Garner. I think she’s so incredibly talented in Ozark and Inventing Anna.

ELLE: You recently starred in Taylor Swift’s All Too Well music video, tell us more about that experience.

SS: It was incredible! She’s someone I’ve always looked up to and been a huge fan of. So it was just kind of surreal that our paths got to cross in this way and that we got to work on something together. It was a pretty quick four or five days of shoot; I don’t think we really knew what we were making until we saw it. The way her mind works is just incredible. She knows exactly what she’s doing. She’s so prepared and so generous just as a director, in terms of offering guidance and support. It was super special.

ELLE: What are we going to see you in next?

SS: I filmed a movie last year called The Whale, directed by Darren Aronofsky. I’m not sure when that’s going to be coming out but I guess that’s where you’ll be seeing me next.