Sarah Todd pursued her career in modelling before she entered Masterchef Australia Season 6. While we may look at our home-cooked vegetables with dismay, when Sarah showcased her love for Indian cuisine, we were intrigued. She had cooked the humble Aloo Gobi with all that Masterchef flair, and her fame with the Indian audiences sky rocketed since then. She stood ninth in that season, but Sarah was on her toes even after walking out those doors back in 2014. She wrote two successful cookbooks, starred in several reality shows and opened three restaurants in India. Her love for Indian food and culture only grew from there. Fast forward to 2022, and the celebrity chef came back to win on Masterchef Australia: Fans Vs Favourites. She reached the finale with Billie Mckay, winner of season 7. Spoiler alert: Billie took the title once again this season, making Sarah the first runner up. Despite her position in the competition, Sarah still achieved so much more, and we enjoyed watching her showcase the complex flavours of Indian cuisine in this season too.

Globally acclaimed chef Heston Blumenthal came to set a pressure test challenge for Billie and Sarah. One might think that Sarah succumbed to the pressure. On the contrary, she was excited to cook a Heston dish. “The nerves were always out of control at the beginning of the completion and I kept wondering when would it would fade away. Strangely, it disappeared towards the end of the season. And although I walked into that grand finale with Heston, that was the first time when my nerves had actually been at bay, and I had such a fun cook,” she tells us.

Just like the last season, this time too Sarah wowed the judges with her quick thinking, skill and technique with the Indian dishes she cooked. From the Rajasthani Laal Maans to Maharashtrian prawn curry to the mango, saffron and kulfi choctop, Sarah brought regional dishes to the forefront in the Masterchef kitchen. And how can we forget the controversial Bhel Puri she made from scratch for a 10-minute challenge? While some mocked the judges for calling its flavours “complex”, I personally get where they came from. But because it’s such a commonly eaten dish for us, we obviously don’t break it down. I mean, it’s street food.

But you have to hand it to Sarah Todd. Picking up something relatively easy and infusing it with thought – she’s developed throughout the competition. Her food has been a fusion of French and Indian. She showcased this style through a lobster dish she cooked for one of the immunity rounds and won that challenge along with $10,000 as prize money. This only serves as a reminder of her many achievements this season.

Fresh out of the Masterchef kitchen and just before the finale aired earlier today, Sarah Todd spoke to us about her Masterchef journey this year, her signature cooking style on the show, future plans, and more. 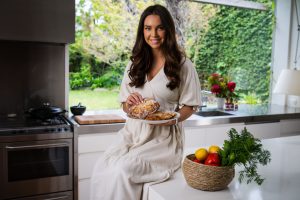 ELLE: Congratulations on making it to the finale! How does it feel?

Sarah Todd (ST): It’s such a weird feeling because when you first begin in the competition, the finale seems so far away but to actually finally be standing there and going through that process definitely feels like an amazing achievement.

ELLE: Heston set the final challenge for the grand finale. How was your last cook?

ST: Seeing Heston walking through those doors was super exciting. He’s such a legend. Working in the industry and having restaurants of my own, I just look up to him and he really has changed the whole industry. I actually met Heston when I interviewed him for a business publication’s summit alongside Narendra Modi in India but to be cooking one of his dishes is incredible. I’m so proud of how my dish ended up. It looked so stunning. Yeah, I did a damn Heston dish and I did it really well! It had 99 steps and I finished every little detail and got everything on the plate. It was a two-round challenge, so the first one was to create a dish that was both sweet and savoury. I did a confit chicken wingette with a sticky glaze and it was a French-Indian dish. So I served it in a gravy that is similar to that of butter chicken. It also featured a beautiful salsa, some pickle and other elements. It was just a dish that I was so proud of. The judges gave me amazing marks. And I think I’m walking out with my head held really high.

ELLE: What made you come back on this season in the first place?

ST: I feel it was a little bit down to the universe to be honest, because we were on lockdown in Australia. I wasn’t able to travel back and forth to India. I have so much going on in India and to enter the competition would mean putting everything on hold. But when the opportunity presented itself once again and as I was here in Australia, I decided to go for it. I felt like I had a lot to tell. I’ve tasted so many beautiful dishes from across India and I really wanted to show a lot more of these regional dishes and not just the standards like butter chicken and things like that although I did it in the finale but I did want to do unique dishes throughout the show and I’ve gotten so many comments from people, even from India, saying that they’re loving it. So there’s something different for people to see rather than than the regular Indian dishes. 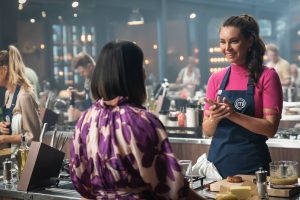 ELLE: How was your experience in Masterchef this season compared to the previous one?

ST: It was very different this season. I did have quite high expectations from myself. But once I really got to that point of creating these dishes that were French-Indian, I felt like I really found my groove. I’ve actually found a really sweet spot for my cooking style going forward, using French techniques with all those beautiful Indian flavours. I’m just really happy with where I got to with my cooking style this season. In the first season, I was still very new to the cooking world and was learning as much as possible. But now I’ve gotten to that point where I’ve really found my own groove.

ELLE: What drew you to the culinary world in the first place?

ST: I have always had a huge passion for food but it grew way more when my son was born and I lived with his Punjabi family, where I got to know that culture. I was studying French cuisine at Le Corden Bleu during the day, and then coming home to this beautiful Punjabi household where it was quite a contrast in terms of the cooking style. Understanding different cultures and cuisines gave me such an insight into the fact that food brings people together. You don’t necessarily need to speak the same language, but you can connect through food. So for me, it was all about bringing people together.

ELLE: You have really wowed the judges this season with Indian cuisine, from Laal Maans to bhel puri to your mango and kulfi choctop. What’s the difference in terms of the Indian food you presented this season and the last?

ST: My repertoire of cuisine and knowledge around India was pretty minimal in season 6. I knew the Punjabi dishes but this time around, I had spent the last eight years travelling around India and experiencing so many different dishes that I really wanted to showcase to the world, especially people in Australia who wouldn’t have seen it before. My travels across India gave me so many tools that taught me so much about my myself and helped me showcase a lot throughout the season. 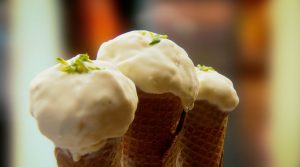 ELLE: When you made the bhel puri, it got mixed reactions back here in India. But what were your thoughts about it being such a flavour bomb for the judges?

ST: Bhel Puri really has so much flavour. It’s something that you get everywhere in India, and it’s such an easy snack–it takes five minutes to put together. But I think the fact that it was a 10-minute challenge in Masterchef and I was able to pull together these chutneys and make everything from scratch was something unique for the judges. While it is such a common dish in India, very few Australians know what Bhel Puri is. I just love that this was a great opportunity to show something really unique from India that is liked by everyone.

ELLLE: Indian food in general seems to have made a mark in Australia, whether it was among the judges, the other contestants cooking it (for instance, Ali Stoner made paapdi chaat and won that challenge), or even when Rick Stein himself came on the show and cooked Madras curry. Why do you think that is?

ST: I think that Indian cuisine has just taken off in Australia in a massive way. In places like the UK, it’s been huge for a very long time. But it is really hitting its stride in Australia, which is something that’s really exciting to see. When my son goes to school, and he’s trying these different dishes like parathas, it’s nice to know that the kids at school are now knowing what all of these dishes are, and able to connect with him on that. So I’m really excited to see where Indian food is headed in Australia. 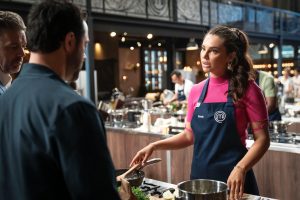 ELLE: What are your top three moments from this season?

ST: The first one would definitely have to be the day when I did my lobster dish with spiced flavours of India–that was a turning point for me in the competition, where the judges saw me as a person that could go quite far. The second one is meeting Aldo and all the other contestants. They’re the most incredible people and are actually flying all the way to Melbourne from Byron Bay and Sydney to be with me for watching the finale. Masterchef is just so much bigger than the prize money and the win. It’s more about the connections that you make and the people that you meet throughout the competition. They become your family. And third is making it to the finale for sure. Getting to cook for Heston and doing such a complex dish for the finale is definitely something that I’m very proud of.

ELLE: Now that Masterchef is over, what’s next for you?

ST: I’m shooting a new TV show coming up in India, which I’m very excited about. I can’t say too much about it but I’m coming to India to film that very soon. I just launched my new product range, which is different spice blends to make life easier for people on the go and quick weeknight meals. And there’s also my range of chilli sauces, which is set to launch tomorrow in Australia and later in the year in India. I am also planning a restaurant at the moment. We haven’t decided on the exact location. But that’s one of my biggest goals for sure.