Going into space to explore the world beyond earth’s gravity, where your own planet is a tiny speck, is an experience a select few are privileged enough to have. And even here, the privilege tips in favour of men. The numbers speak for themselves. There are less than a hundred women who’ve made it there, out of which the number of women of colour that have made is only a handful. That speaks volumes, doesn’t it? So when a woman from any part of the world makes it possible, she becomes a beacon of hope for so many other girls out there, aspiring to take this up. Last year, Sirisha Bandla became the third Indian-American to head to space. She joined British billionaire Richard Branson and four other crew members on the Virgin Galactic’s SpaceShipTwo Unity for a 90-minute journey to the edge of space from New Mexico. Her role was that of a researcher. The fact that she was a part of this journey makes her an inspiration for so many aspirants who wish to reach for the stars. 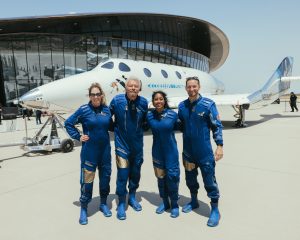 Recalling her own experience of taking off to space, Sirisha says, “The whole experience was a journey that I’m so honoured to be a part of. And then to be one of the first but definitely not the last is even better, because I truly want to see more Indians in space, I want to see more women in space. And this is just a step in the right direction.”

An achievement like this is bound to make your family proud and Sirisha’s family was no exception. She feels lucky to have a supportive family. “They were all waiting for me on the ground and it was so special,” Sirisha reminisces. “My parents flew in from New Delhi on very short notice to come see me fly to space. The first thing I did was hug my dad, and he gave me such a tight hug that my sunglasses hanging on my flight suit burst into pieces. But it didn’t matter as it was all in the moment. Later that day he found all the pieces of my sunglasses and when he visited me in DC a few months later, he had fixed the sunglasses. He wanted me to keep them as a memento,” she adds.

Reaching For The Stars

The Chirala-born aeronautical engineer always knew she wanted to head to space, ever since she saw the stars in the sky as a kid. “I always wanted to be an astronaut. I think it really did start with my earliest memories here (in USA). I only spent a few years in Chirala and I don’t have very many memories as a child, but looking up at the stars here is something I remember. It was during one of the blackouts. As there’s not a lot of pollution, the stars looked so bright. I couldn’t help but just want to go see what’s up there. So everything I did since then was figure out how to get to space. But it was only after I discovered Dr. Kalpana Chawla that something sparked in me. I never met her in person but she’s had such an impact on my career. She was an incredible engineer. And something about seeing a role model that I shared an identity with, really helped bring down a mental barrier. That was something that was a dream. And that was achievable. And I honestly decided to go to space because of that,” she shares. 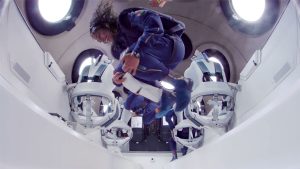 Prior to Virgin Galactic, Sirisha had first applied to work with NASA. However, her poor eyesight didn’t meet the requirements for being a NASA astronaut. But like they say, when one door shuts, another one opens. Despite not achieving this dream, she didn’t give up. “When I saw Richard Branson declare that he’s going to start Virgin Galactic, a company that’s going to open space up for everyone, I was like yes, I could do this. I can be an astronaut and I’m going to work for Virgin Galactic and fly to space,” she adds. And look where she is today! 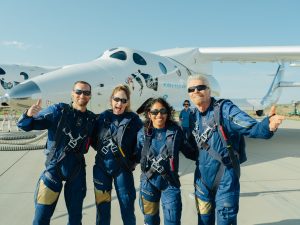 Virgin Galactic is a one-of-a-kind experience that makes it possible for everyone (above the age of 18) to go to space–whether you’re a lawyer, musician, poet or artist or a researcher who wants to conduct research in space. The team believes that when “you witness the majesty and fragility of Earth from space, something inside us shifts. This transformation will bring countless benefits to life on our beautiful planet.”

“I just think that someone who’s met an astronaut who shares the experience of why they went to space and what they want to do, they could inspire people to also maybe want to protect the planet or be more sustainable or go into leadership positions and politics because they want to close the divide. So it’s not just about spaceflight. I think spaceflight is a means to a better humanity. And I know that’s very dramatic sounding, but I truly believe it,” Sirisha says.

It’s interesting to note that Virgin Galactic is very different from other space organisations. When you take this flight to space, you observe the curvature of the Earth. But what does that really mean? Sirisha explains. “It’s a journey that starts before you take off from the runway. When you decide you want to go to space, you give us a call. You’re brought into a community that we call the future astronaut community, you’re connected with other people that have tickets and are able to talk to people that have gone to space. Talk to leaders in the aerospace industry, all before you actually take that physical journey yourself. It also includes five days of training ahead of time that I think is so unique, because not only does it prepare you operationally like learning how to move around the cabin but also learn what our systems look like and the emergency procedures. It helps prepare you mentally because it is such a perception changing, transformative experience. We want you to be in the right mental state to be able to take it all in. We take time to actually sit down and write what this journey means to us, little things like that.

The Need For Female Representation

Dr. Kalpana Chawla, Sunita Williams, Swati Mohan, Ritu Karidhal, Nagin Cox, Priyanka Shrivastava, Sirisha Bandla, among others are women of colour who’ve smashed stereotypes and proved to the world that there is a space for women in space. Albeit there’s still a long way to go.

“Female representation is so important,” says Sirisha. “It’s hard to be something you can’t see. So hearing stories of incredible women, sharing their wins and incredible work in their fields, allows young women to identify opportunities that they didn’t know existed for them.”

While women in the aerospace field have made a difference, the sexism still makes its way through different ways. Take for instance the case of NASA astronauts Anne McClain and Christina Koch who were set to do the historic all-women spacewalk in March 2019. A few days before the mission, McClain realised that the suit designed for the spacewalk wasn’t the right size for her. And as the the team couldn’t design another suit in time, she had to swap her place with Nick Hague. This had caused an uproar among feminists and rightly so, because everyone questioned why another size of a spacesuit isn’t readily available for a female. At that point, the decision to swap was logical as a proper fitted space suit prevents body harm in space. But this incident struck a meaningful conversation and later that year, Kosh along with Jessica Mier completed the all-women spacewalk with proper fitted suits.

Fortunately, Sirisha had her suit custom made. In fact, everyone in the crew gets their suit fit for their bodies. “Having women and people from different experiences and backgrounds on a team, and this isn’t just for the aerospace industry, it’s just in general, is going to lead to a better product. Virgin Galactic’s cabin is a shirt sleeve environment, meaning the fit is custom made for you. It has the pockets you need for not only personal items, but items during the flight such as the harnesses and everything comfortable to maximise comfort during the ride itself. This is possible because of the diverse team we have,” she says.

After the first spacewalk, even the question of how do women menstruate in space popped up, especially for astronauts as they spend longer time there. While it has been clarified that despite being against gravity, your flow isn’t affected, it’s the sanitary measures that involve disposal of sanitary napkins/tampons/cups that is a cause of concern. And because of this, women in space either resort to taking a pill to delay their period or wear an IUD. On asking Sirisha how the facilities are for women in her team, she said that it isn’t so much of a concern as it’s merely a 90-minute journey. So it’s not any different than going to any other destination or on a flight in terms of the time period but they have a medical team. “Before you decide to buy a ticket, you are able to speak to medics about any concerns you have, whether it’s before or during the flight,” Sirisha clarifies. And TBH, the aerospace industry needs more of this. 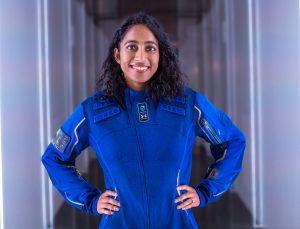 The Women Who Shaped Her

While Dr. Kalpana Chawla had such an impact on Sirisha while growing up, she also acknowledges her mentors who made a difference to her career. “There are so many astronauts I’m inspired by, especially their journey and what they saw. But I’m here because of women who have taken time to mentor me. It’s very important because what you experience in the industry is not always the same as others. I’ve been so lucky to have women that I can call up and talk to about my experience and vice-versa. Women like Lori Garver, who’s the Deputy Administrator of NASA, was one of the first people I met when I moved to DC, and helped me navigate this male dominated area. Peggy Smith, the administrator of the commercial space transportation officer at the FAA (Federal Aviation Administration) who unfortunately passed away way too soon, but inspired so many women. As busy as she was, she took time to help me navigate my career as well. So they’re the people that I really owe my career to,” Sirisha says.

“Our next flights are going to be some test flights, as well as flights with the Italian Air Force. And they’re flying a researcher from their centre for national research, as well as to Italian Air Force people, as well, and payloads and they’re looking at everything from like material science to physiology. All that data is going to be collected and utilised for future space flights as well as technologies on earth to allow people to live better lives,” she shares on her upcoming plans.